By Sotsialisticheskaya Alternativa (our sister organisation in Russia) reporters

Overnight, following a demonstration of thousands in the central “Republic Square” of Almaty, the country’s largest city buzzed to the sound of stun grenades and militarised police vehicles. There are reports of shots being fired at protestors, possibly with rubber bullets in at least two cities. One video from Almaty shows armoured personnel carriers retreating from protestors, whilst in Aktau there are reports of riot police joining the protesters.

Just yesterday evening 4 January Kazakhstan President Kasym-Zhomart Tokaev addressed the country calling for “reason”, and warning people not to support “provocateurs” or “extremists”. By dawn today 5 January he announced that he had ordered the whole government to resign, appointing former Deputy Premier Alikhan Smailov as acting Premier, and two leaders of the Committee for National Security (KNB) as Deputy Premier and State Secretary. At the same time, he declared a two-week State of Emergency over large parts of the country, including Almaty and the oil and gas regions of Mangystau.

The internet, telegram and social networks have been closed down over the country.

For months now the Mangystau region has been the scene of strikes by different groups of oil workers. This region has perhaps the strongest tradition of militant workers’ movement across the whole of the former Soviet Union following the seven-month strike of oil workers, which was brutally suppressed ten years ago.

The last straw which led to a generalised protest in Mangystau was the announcement for the New Year that gas prices would double from 60 to 120 tenge (11/22 eurocents) a litre. This more than angered those living in the region as it is they who pump the gas from the ground. As initially the regional government refused to meet the demand, protesters started to demand a doubling of wages as, they pointed out, the prices of all essential goods, utilities and taxes were increasing rapidly whilst the ruling elite were increasing their already obscene wealth.

Once it became clear that the authorities were not going to meet the demands, the demonstrations grew and spread across the region, and then the country. The main railway line to the West has been blockaded, and flights from Almaty airport cancelled.

There are many reports now that younger protesters in particular have radicalised and are now shouting “Shal, ket!” — “Grandad — go!”. This demand gets to the real root of the post-Soviet regime as it is directed at Nursultan Nazarbayev, who resigned as President last year, although he has maintained all real power in his hands as “Leader of the Nation”.

The situation at the time of writing this article is that President Tokaev has now ordered that the price of gas will be reduced to 60 tenge a litre for six months, with state regulation of the prices of gas, petrol and other socially necessary products, as well as subsidising rents for poor families and placing a moratorium on utility price rises. He promises to set up a special fund to address healthcare and child poverty. He warns, however, that the reduction of the gas price has to be temporary as the global market price is much higher.

Whether this is enough to calm the protests has to be seen. Given the past record of the ruling elite, these promises are likely to remain empty words. Anger is very high, and concerns not just prices. In December, for example, 30,000 oil workers in the Mangystau region alone were made unemployed. There is much resentment about the continued imprisonment of political opponents, including many trade unionists. Strikes have been spreading through the region, and there are reports they have reached the scale of a regional general strike.

Naturally, the regime itself and its supporters in the Kremlin and the Belarusian regime are saying that this is another western provoked “coloured revolution”. Mouthpiece of the Russian regime “Life News” claims that the protests have been plotted and planned for. They name the oligarch in exile Mukhtar Ablyazov as responsible, suggesting that they have been organised to undermine the negotiations planned for next week between Russia and NATO over Ukraine. This is, of course no more than another conspiracy theory, spread by the regime intended to undermine support for the protests.

At the same time, this raises the question: if “Grandad goes” what is to replace him and the system that he has built to defend not just his interests, but those of the corporations that support him? Strikers involved ten years ago in the Zhanaozen drew far-reaching political conclusions: “they called for the nationalisation of the oil companies under workers’ control”. By November 2011, the strikers set up a unified workers’ committee over the whole region which called for a boycott of the parliamentary election as a result of their lack of confidence in the current political parties and for the setting up of a national unification of fighting trade unions with their own political party.

The brutal repression that followed the Zhanaozen massacre meant a period of retreat by the workers’ movement, but now that the current protests have gained a national scale, the time has come to put these issues back onto the agenda for discussion. 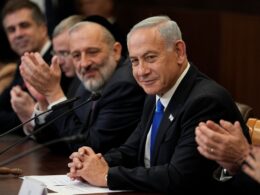 By Paul Murphy TD No sooner had the Greek people decisively voted to end austerity, than the European…
bySocialist Party