The Israeli State, headed by the corrupt regime of Benjamin Netanyahu, is waging yet another murderous assault on the people of Gaza, home to two million Palestinians residing in the world’s largest open-air prison. The small strip of land, where much of the buildings and infrastructure have been destroyed by successive Israeli assaults, is besieged by land, air and sea. Its population faces enormous daily hardship; according to the United Nations 54% of Gazans are food insecure and more than 90% do not have access to clean and safe water.

At the time of writing, 53 Palestinians, including 14 children, have been killed because of this new murderous assault, and all the indications are that this slaughter is set to continue. It is worth noting that 50% of the population of Gaza are under the age of 18.

With characteristic obscenity, the Israeli Defence Force (IDF) have grotesquely named this war “Operation Guardians of the Wall”, as if they were playing a computer version of Game of Thrones. Yet for a population that is bearing the brunt of the IDF’s bombs and artillery fire this war is all too real and its human consequences horrifying. There is no safe place from this reign of terror.

The slaughter in Gaza takes place in the same week as the storming of the al-Aqsa Mosque in Occupied East Jerusalem by Israeli police, at the same time as the holding of a right-wing, provocative march entitled “Jerusalem Day” on 10 May, to celebrate the occupation of East Jerusalem in 1967. All of this takes place against the background of attempts to evict Palestinians in the neighbourhood of Sheikh Jarrah to make way for Israeli colonial settlers.

Palestinians are an oppressed people who have been dispossessed of their land and rights since the founding of the Israeli State in 1948 and the subsequent occupation (and increasing annexation) of the West Bank and Gaza in 1967. They have every right to struggle to win full national liberation and freedom from the oppressive yoke of the Israeli State, which occupies and oppresses them daily.

Such a struggle, that organises the Palestinian masses democratically from below, with the right of armed self-defence, in the Occupied Territories and within the Green line of Israel can deal enormous blows to the Israeli State. It would be a movement that would stand in the traditions of the First and the Second (in its initial phases at least) Intifada that erupted in 1987 and 2000 respectively, and that shook the foundations of the seemingly indomitable Israeli State.

The corrupt and collaborationist regime of Fatah in the Palestinian Authority (PA) has failed to organise such a struggle, nor has the dictatorial government of Hamas in Gaza. The latter has engaged in firing rockets into Israel in recent days which are both futile and counterproductive, as it will strengthen the hands of the Netanyahu government in justifying its war against Gaza and Palestine generally.

A struggle for Palestinian liberation could reach out to other sections of the working class and oppressed in the Middle East and North Africa, who live under repressive capitalist dictatorships that are increasingly allying themselves with the Israeli state and are hopelessly subservient to imperialism in the region. It could make an appeal to join them in a struggle, to overthrow the rule of these all these regimes and the economic, political and social order of capitalism they represent. This is an order built upon exploitation and oppression and offers only a future of conflict, poverty, pandemics and environmental destruction.

The Socialist Party and our sister organisation in Israel/Palestine, Socialist Struggle Movement (SSM), would point out that within Israel itself there is a force that can potentially be won to a struggle for such a transformation of the region. Israeli Jewish society is a stratified and class-divided one, that contains within it all the exploitation and different forms of oppression that are inherent in capitalism. For example, Ethiopian and Mizrahi (Jews originally from the Middle East and North Africa) Jewish working-class people face different forms of discrimination. In the last year, young Israeli women have organised protests and strikes against gender-based violence, and mass protests took place against the corrupt Netanyahu government. The interests of Israeli workers are fundamentally opposed to those of their rulers.

A joint struggle between Palestinian and Israeli working people to overthrow the Israeli capitalist state can lay the basis for an equal, democratic solution to this conflict. A socialist solution would be based on the rule of working-class people, where society’s resources are brought into public ownership and used and democratically planned in the interests of all. The Socialist Party and SSM advocate a truly independent, socialist Palestine and democratic, secular socialist Israel based on free and open borders with the rights of minorities guaranteed, as part of the revolutionary socialist transformation of the Middle East.
Such a programme can point a way out of the nightmare of oppression, poverty and conflict. 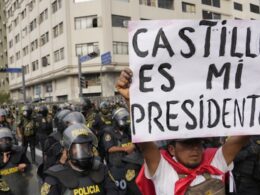 By Darragh O’Dwyer 2022 came to a chaotic close in Peru. When former president Pedro Castillo attempted to…
bySocialist Party 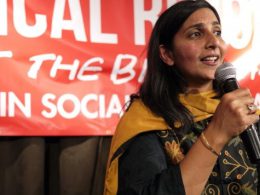 Russia: “Pussy riot” – made into scapegoats by revengeful Putin

During an exchange of views with William E. Kennard, the U.S. Ambassador to the EU in the International Trade Committee in the European Parliament today, Joe Higgins MEP  challenged the ambassador about the weak US response to the slaughter of peace activists yesterday by the Israeli Defence Force.