Rape is no joke

The Socialist Party of England and Wales has launched a campaign called “Rape Is Not a Joke” with the aim of tackling the prevalence of jokes about sexual assault in comedy.

The Socialist Party of England and Wales has launched a campaign called “Rape Is Not a Joke” with the aim of tackling the prevalence of jokes about sexual assault in comedy.

While on the surface this might not seem like a pressing issue, the fact is that by incorporating this sort of “humour” into their routines, comedians like Daniel Tosh and Jimmy Carr are contributing to the trivialisation of rape in our society. This is in the context of increasing attacks on women by politicians.

Tory Justice Minister, Kenneth Clarke, suggested some types of rape are “less serious” than others. George Galloway MP claimed that even if the allegations against Julian Assange were true they wouldn’t constitute rape but merely “bad sexual etiquette”. Meanwhile, services aimed at helping survivors of sexual assault are being cut to the bone.

While comedians and politicians have the right to express their opinions (no matter how revolting) ,rape victims also have the right to turn on the television and to go to shows without having painful memories triggered and their experiences reduced to distasteful one-liners. This is why such a campaign is necessary, not to attempt to curb free speech or to gag individual comedians but to challenge a culture that is accepting of rape and make its trivialisation socially unacceptable.

Despite the progress that has been made in recent decades, survivors of sexual abuse are often haunted by feelings of shame and self-recrimination and find it difficult to talk about their experiences for fear of not being believed or even blamed. As a result, only a minority of rape victims go to the police and only a small percentage of reports result in conviction.

According to a report commissioned by the Dublin Rape Crisis Centre in 2002, 42% of women and 28% of men have experienced some form of sexual abuse in their lifetime. Despite this, only 7.8% of women and 1% of men reported these experiences to the Gardaí. This is even more horrifying when we consider that only 7% of reported rapes end in a conviction. Rape is no joke even if the conviction rates are. 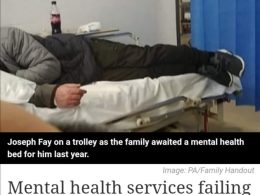 The last months have seen a disgusting campaign of stigmatisation and vilification of prostitutes in Limerick. Local business owners, such as rugby star Jerry Flannery, have taken to local and social media attacking prostitutes in the most vile of language, whilst the Gardai have begun a new policy of taking those selling sex to court to get civil orders banning them from parts of the city associated with on-street prostitution.