Legislation for Supreme Court ruling on X should proceed immediately as a first step to free, safe and legal abortion on demand. Join the protest at the Dáil today at 6pm against government’s lethal inaction

Legislation for Supreme Court ruling on X should proceed immediately as a first step to free, safe and legal abortion on demand. Join the protest at the Dáil today at 6pm against government’s lethal inaction

“It was only last Monday that we raised the issue of the need to legislate for the Supreme Court ruling on X at a debate in Fingal County Council. None of us were aware at that stage of the tragic and needless death of Savita Halappanavar who developed septicaemia from E Coli after she was refused a timely termination of an unviable miscarrying 17 week-old foetus.

“Our first thoughts must be for Savita’s family and friends and Savita herself who endured two and a half days of agony during which, despite her pleas, she was denied a termination because there remained a foetal heart beat and according to her husband she was told that we ‘live in a Catholic country’.

“This medieval state of affairs persists because of the cowardly inaction of successive governments since 1992 as well as the lethal foot dragging by this government who voted down a United Left Alliance backed bill that would have saved Savita’s life and potentially the lives of other women. Legislation for X must proceed immediately to prevent this from happening again. Joe Higgins TD and others will seek a debate today in the Dáil over what has happened.

“However we cannot assume that this needless tragedy will bring the political establishment to their senses. People power pressure from below is what is required. The Socialist Party therefore urges people to turn out in force this evening at 6pm outside the Dáil to demand action on X as a first vital step towards free, safe and legal abortion services in Ireland. 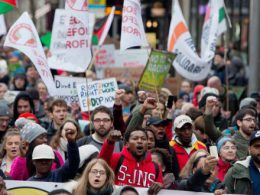 IMAGINE THOUSANDS of houses left bereft of schools, open space or a community centre for years. Imagine green areas, playgrounds, parks and pitches left unfinished and/or withheld from residents for years while builders move on happily to their next profitable project.