The right wing tried to steal the election with voter intimidation, suppression and fake-populist posturing on the economy in the final weeks, putting over one billion dollars in campaign cash into trying to disenfranchise the poor, young people and people of color.

Obama’s vote was nothing like the excited and energetic campaign of 2008. This year, voter turnout was down by 12 million compared to four years ago. Most people voted for Obama as a “lesser evil” rather than as the savior they saw in 2008, who would bring “hope” and “change.”

Last year’s Occupy Wall Street movement made an impact on this election by bringing a discussion about economic inequality between “the 99% and the 1%” to the forefront. A brighter spotlight shone down on the record $6 billion spent on federal races, to the outrage of millions. Occupy’s message against corporate domination also fueled a healthy hatred for Mr. 1% himself, Mitt Willard Romney.

Obama won this election in spite of his pro-corporate record. Banks received trillions in handouts while social services were cut and millions of families lost their homes. Many antiwar voters supported Obama, despite continued bombing of civilians in country after country, expanding Bush’s model of an unaccountable imperial Presidency, waging war in Libya, and drone strikes around the world without discussion in Congress.

Many of Obama’s voters were deeply disappointed in his performance over the past four years, correctly seeing him as a puppet of Wall Street and the 1%. The Obama administration begins its second term without any real mandate. The Democratic Party “base” among the unions, people of color, women and the LGBT community, swallowed their anger at Obama during the elections, holding their nose to vote for the “lesser evil.” Now, with the elections behind them, all the pent-up anger and frustration is set to boil over.

Demands for jobs, clean energy investments, education funding, housing rights, and solutions to an endless list of injustices will again come to the surface. And again, Obama will put the interests of Wall Street and big business first, provoking fresh outrage and opposition. The time is ripe for building new movements of workers and oppressed, politically independent of both corporate parties.

For the first time nationally, voters in Washington, Minnesota, Maine and Maryland voted in favor of same-sex marriage rights, marking a historic turning point in the struggle for LGBT equality. Many other progressive ballot questions won across the country, from minimum wage increases to defense of union rights to measures against the racist “war on drugs.” Minnesota voters narrowly rejected an attempt enshrine the harshest voter restriction laws in the country into their constitution. This shows a shift in demographics and a shift in attitudes among young people and workers. Combined with massive working-class anger, this is the basis for explosive movements in the next year.

Romney based his strategy largely on a solid white male vote (especially in the South) and hopes of a (rigged) low voter turnout. The Republican tactics ever since the 1960s have been to win elections by whipping up fear and hatred among white voters. This strategy will be more difficult to be implemented in national elections, a reality that will become even more clear with coming elections, as the rising generation reaches voting age. This election defeat will deepen this brewing crisis in the Republican Party, which will be forced to redefine its identity or face being reduced into a permanent minority party.

While there wasn’t a big shift in the composition of Congress along party lines, the changes in the Republican legislators are worth noting. The “moderate” Maine Republicans and “centrist” Dick Lugar are out of office as are several of the most crazed Tea Partiers. Despite many Tea Party defeats, the over-all balance of power within the Republican congressional delegation has shifted even further right, setting the stage for more bipartisan gridlock.

Yet in Obama’s victory speech, he repeated his stale pledge to “reach across the aisle” to the Republicans. In reality, Obama’s bipartisanship is cynically designed to provide cover for his nakedly pro-corporate policies, which will soon be on display. Both parties are preparing historic cuts to Social Security, Medicare, and other vital programs before the end of 2012. This could provoke radicalization, street protests and further struggles. In this context, there will be opportunities to build mass united working-class resistance, anti-corporate electoral campaigns, and a political party of the 99%.

Building the Socialist Movement in a New Environment

The historic result for Socialist Alternative candidate Kshama Sawant in Washington State shows the potential to build the movement against capitalism (see article “Socialist wins historic 27% against WA House Speaker“). Running openly as a Socialist, Sawant got more votes than any Republican has ever received against Frank Chopp in this powerful Democratic politician’s 18-year career.

Running against budget cuts and corporate tax evasion, and calling for public ownership of Boeing, Microsoft, and Amazon, Socialist Alternative’s electoral challenge helped popularize the ideas of democratic socialism, winning over 11,906 working-class votes which is projected to grow to over 20,000 votes once counting is finished. This result is the biggest highlight for local independent left candidates in 2012 and needs to be built upon.

To take advantage of this situation, we need to boldly call for organized resistance against cuts involving hundreds of thousands of union members, Occupy activists, community campaigners and young people. These coalitions will need to prepare for strikes and mass direct action to defend living standards against the corporate assault. Out of these struggles, we can lay the basis for what is needed—a mass party of working people with a democratic socialist program.

In other news outside the two main establishment parties, we saw the threat of right-wing populism. Gary Johnson, the Libertarian Party presidential candidate, got over one million votes, three times the votes won by the most prominent left presidential candidate, Jill Stein from the Green Party. Like the Tea Party victories in 2010, this provides a glimpse of the potential for right-wing populist ideas to grow if the left and workers movement fail to build a mass political alternative to the hated corporate establishment.

These elections, taking place in the fifth year of a grinding economic crisis, showed the deepening polarization in U.S. society. At root the political and social polarization flows from the sharpening class divide, and the growing desperation of tens of millions of workers. Lacking a clear working-class political voice in the elections, the contests between corporate politicians gave distorted expression to the class anger. In this situation, right-wing ideas could gather support, and the last four years have seen the rapid growth of hate groups.

On the other side, where a bold lead from the left is given, the class polarization can also provoke people to consider far-reaching left-wing solutions. There is a widespread search for ideas that can offer a way out of the capitalist misery overseen by both parties of big business. As the Socialist Alternative campaign for Kshama Sawant in Seattle illustrates, U.S. society is becoming increasingly fertile for the rise of socialist ideas. 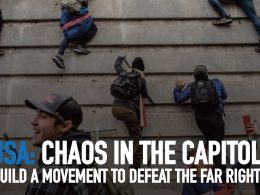 Egypt: Polarisation grows – No trust in the generals

The stormy and bloody developments since the removal and arrest of President Morsi by the military mark a new, challenging and dangerous stage in the unfolding Egyptian revolution. 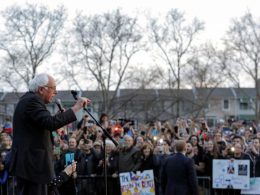