The announcement yesterday by the Department of Justice that all Non-European migrant fishers enrolled in the now abolished Atypical Work Permit Scheme has been granted a stamp 4 giving them full labour market access is the culmination of a struggle waged by hundreds of predominantly Egyptian, Filipino, Ghanaian and Indonesian fishers and the International Transport Workers’ Federation (ITF). They have brought to an end a state-sponsored system of racist super-exploitation in the Irish fishing fleet.

Until the end of 2015, the vast majority of Non-Europeans working on the largest fishing vessels concentrated mostly in Castletownbere, Howth and Kilmore Quay where undocumented having been smuggled into the state typically via a UK seafarers transit visa.

Former SIPTU and now retired ITF official Ken Fleming undertook pioneering work over 15 years ago to uncover abuses in this sector. In the end, an exposé by the Guardian into the exploitative practices in the sector led then Minister for Agriculture, Food and Marine Simon Coveney to establish a special permit scheme to regularise the undocumented fishers and give the vessel owners a legal means to recruit non-European crew after that.

The ‘Atypical Work Permit Scheme for Non-EEA Fishers’  turned out to be the most disadvantageous work permit scheme for any Non-European workers employed in Ireland. Most Non-European workers in Ireland come under the Critical Skills Permit or General Workers Permit. While socialists have no truck with permit schemes which by definition are discriminatory these two schemes come with superior conditions relative to what the fishers have had to endure. It includes the minimum salary of €30,000 and the right after a fixed period of time to progress from an exclusive employment relationship with the employer who brings you to Ireland to a visa stamp 4.

In the case of the Atypical Scheme the minimum salary by the time of its recent abolition was €21,000 based on a notional average 39-hour week. Furthermore, the visa had to be renewed annually and there was no progress as of right to a visa stamp 4 was entertained totally tying the fisher to the vessel owner indefinitely.

Many vessel owners took full advantage of this and used their double power over the fisher, in terms of both their employment and the legal status, to force a work regime of 20-hour days in the fishing grounds. In reality, this meant that the migrant fisher was on half the minimum wage.

A string of successful cases taken by the ITF on behalf of fishers at the WRC to recover unpaid wages and the admission by the Garda of 18 fishers who were actually enrolled into the atypical scheme into their referral mechanism for human trafficking over the last six years gave only a partial indication of what was happening in the industry.

The vast majority of fishers have felt coerced to put up with this exploitation because it was a simple matter for the vessel owner to communicate to the Department of Justice that the employment relationship had ended to render the fisher undocumented.

The ITF, whose fisheries campaign in Ireland was taken over by long-time Socialist Party member Michael O’Brien after Ken Fleming’s retirement, commissioned research conducted by the Maynooth University Department Of Law on the experiences of non-EEA migrant workers in the Irish fishing industry in October 2021. It was based on in-depth interviews with fishers about their working conditions and it obtained widespread coverage. This was instrumental in triggering a government review of the scheme. But also instrumental was an increasing number of migrant fishers sticking their necks out individually and collectively to demand change including holding a protest outside the Dáil last May and waiving their individual anonymity in talking to the media about their situations.

The government’s review of the scheme, published last October, while announcing the abolition of this permit scheme and the integration of the fishers into either the Critical Skills or General Workers permit scheme had also recommended a laborious two-year process by which those fishers currently enrolled in the Atypical Scheme could successfully apply for a visa Stamp 4.

However, further stories in the media including a series of recent investigative articles by Noteworthy.ie into the problems in the sector as well as scores of judicial reviews taken by the fishers seeking to improve their status in the state appear to have forced a short-circuiting of this process. The Department of Justice yesterday basically announced that all fishers enrolled in the Atypical Scheme can immediately make appointments with the Garda National Immigration Bureau to get their new Stamp 4 visas over the coming days and weeks.

Victories can be won

This change of status enormously strengthens the hands of fishers who want to fight the system of effective pay apartheid on Irish fishing vessels and fight for equal pay and conditions.

This announcement does not have a direct bearing on undocumented current and former fishers who have also been part of this struggle. However, a number of undocumented fishers have been recently granted Stamp 4 visas by the Department of Justice off the back of individual representations and threats of court action made by their solicitors and the indications that this will continue.

This experience has shown that a combination of a fighting campaigning approach even by the most exploited workers, coupled with a tenacious approach by a trade union organisation results in victories that can be replicated by tens of thousands of migrant workers concentrated in other sectors such as meat processing, agricultural work and elder care. 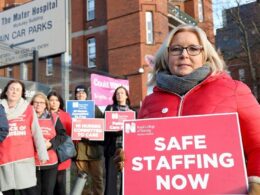