China is being shaken by a new resistance movement. Tens of thousands of mortgage rebels have announced they will no longer pay back their housing loans for unfinished apartments they cannot live in. Announced on social media just a few weeks ago, the movement has mushroomed and spread to dozens more cities. This is despite state censorship banning discussion on the topic and closing down web forums that served as coordinating cells for the “strike”.

China’s property crisis is worsening by the week. The global capitalists and China’s regime have largely been caught napping by the speed and depth of the property slump. S&P Global have revised their earlier assessment of a 15% contraction in China’s property market this year, and now predict a collapse of 28-33%. That figure is so huge that it would leave no possibility of China’s economy avoiding a recession. Still, Beijing may publish fraudulent GDP figures claiming growth of 3-4% by the end of the year.

The GDP growth of 0.4% in the second quarter is not credible, and using other metrics such as housing sales, cement and steel output, road haulage and air travel data, it seems more likely the economy contracted sharply in the April-June period.

The mortgage strike has grown rapidly from its outbreak in one province, Jiangxi, in late June. The number refusing to pay their mortgages has spread from 20 construction projects initally, to 100, 200, and now 300 construction projects across the country. This revolt encompasses tens of thousands or even 100,000s of mortgage strikers spanning some 50 cities. These are mostly poorer cities, showing this protest is based on largely working class or lower middle class households.

There are an estimated eight million unfinished apartments in China, which have been sold by financially insolvent property developers, with the buyers unable to move into them. In China, the most common method of selling new apartments is pre-sale, with up to 80% of apartments sold before they are built. Construction on these developments has been suspended because the developers, some of China’s biggest companies, have run out of money.

The mortgage strike is the latest manifestation of “lying flat” (tangping) in China. The difference is this is not just passive non-cooperation but an active struggle, withholding payments in the face of possibly severe state repression and threats. This movement has panicked the authorities because of the potentially dire impact it can have on the banking system if the movement spreads.

”Construction delay isn’t new,” a CCP official told the Financial Times. “What is unexpected is the runaway spread of the problem.”

“If we do have this issue [the mortage strike] developing much faster if not exploded, it will threaten the financial stability for sure,” Betty Wang of ANZ Research told ABC News. “If the policymakers fail to address this issue quickly, it could develop further and evolve into a much bigger risk,” she added.

The central bank, PBOC, has today announced a new bailout package for the property sector of $148 billion, to restart some of the stalled housing projects. In our opinion this package will not be sufficient, just as we have seen many earlier government measures fall flat this year as the property slump deepens. A feature of the crisis this year is the increasing paralysis of the government in Beijing.

The Chinese dictatorship has a tradition of defusing mass struggles by using a carrot-and-stick approach, a mix of small concessions and heavy repression. But the government faces an unusually tricky dilemma in how to defuse the mortgage revolt. The stick is already being threatened: police arrests and using the social credit system, which can punish transgressors by denying them access to future loans, travel, even employment and university admission.

But there are also reports of a possible “mortgage vacation” being granted (the carrot). Both options contain big risks for China’s ruling class and the conflcting reports are a sign of indecision and even splits in the regime. If repression is used, it could have the opposite effect and cause the revolt to spread. The idea of granting a “mortgage vacation” also suggests some in the government realise this is not a good time for a crackdown due to the dire state of the economy and general level of public anger.

But if it declares a “vacation” the government is effectively legalising the mass non-payment movement, even if it says this is only for a temporary and limited period, and this could encourage many more to refuse to pay.

chinaworker.info declares our full solidarity with the mortage strike. They have been cheated and robbed, and therefore their struggle is entirely justified. Socialists call for the cancellation and refund of mortage payments for all the unfinished projects. We call for urgent increases in unemployment insurance and an end to pay cuts which are also spreading like an epidemic.

We demand not only the “zombie” developers but the entire property industry is taken into public ownership without compensation and placed under democratic working class control and management. Socialist measures and democratic planning are the only way out of China’s crisis, while the regime’s capitalist and repressive policies only make everything worse.

We demand an end to the repression against the mortage strike groups and all political censorship on the internet – for freedom of speech and freedom of association. Crucially, workers need to build independent trade unions and workers’ organisations to defend their interests in struggle against parasitical and bankrupt capitalism, and against dictatorial rule. 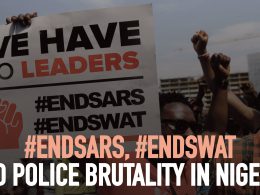 The Movement for a Socialist Alternative in Nigeria has been actively campaigning to end SARS, end police brutality…
bySocialist Party
Read More