The total failure of the capitalist system to deliver for the needs and aspirations of ordinary, working-class people is once again on full display for the whole world to see. The complete inability of capitalism to protect people from the worst pandemic in just over 100 years is a shocking indictment of how decrepit the system has become.

A crisis waiting to happen

The immediate steps that should be taken now to control, contain & mitigate the virus are to implement mass testing with a quick turnaround on results, advanced contact tracing, massively investing and bolstering our healthcare systems, particularly mass training and recruitment drive for healthcare staff through the public system, which would significantly cut across the mass unemployment that many workers are now facing. We also desperately need the building of public housing to cut across multi-generational, packed households in order to protect the elderly, as well as significant measures to protect workers in their workplaces while we wait for a safe vaccine to be developed.

But under the profit-driven capitalist system, this is all extremely problematic, including the development of a safe vaccine. It appears at the moment that the capitalist class hope that a vaccine will be the quick-fix solution to solving the Covid-19 pandemic, rather than taking the necessary steps as previously outlined. Due to this, many world leaders are eager to rush the development of a vaccine in order to restart economies fully, to continue to fuel the profits of big business. The plans for developing a vaccine are almost completely based on the private sector, relying on the fundamentalist worship of the market to deliver through Big Pharma corporations. This presents a myriad of problems for the development of a safe vaccine and the adequate distribution of it to the general population.

Firstly, the system is driven by profit and vaccines are not very profitable. The development of vaccines requires heavy subsidies from the state in order to generate a profit. This is true for many medicines developed by Big Pharma. The state foots the bill for the research and development of drugs while the shareholders reap all the profitable gains when the drug goes to market. Most drugs that are sold by Big Pharma are taken on a consistent and continual basis, therefore yielding high profit margins, but vaccines are generally only used once, perhaps twice. Due to this fact, many corporations are reluctant to develop vaccines. This shows the deeply shortsighted nature of the system we live under

These corporations are only interested in generating the highest possible profit margins from their investments. If a product like a vaccine only generates a marginal profit, the company will choose to invest in a more profitable product that is used repeatedly. In the 1970s, more than 20 companies were developing vaccines for the US market, starkly contrasting with last year, when only a paltry 4 companies were developing vaccines. Big Pharma’s interests lie in developing the highest possible profits for its shareholders, not sustaining the health of the population. Facts such as these  clearly demonstrate the need for an alternative to the profit-based system in delivering healthcare for working-class people.

Secondly, there is the serious problem of intellectual property rights. If a company successfully develops a safe vaccine, it is in that company’s interests to withhold the knowledge through patent protection in order to reap all the profit for themselves rather than sharing this knowledge with other companies or to other countries desperately in need. Considering the escalating imperialist tensions between the dominant global power of the US and the rising power of China, it is likely that any US administration would withhold this invaluable knowledge from the Chinese state or, at least, hold it for a high ransom.

This would once again see publicly funded institutions – in this case, Oxford University – investing in the R&D of a vaccine but generating very little financial reward. Most of the surplus generated would go straight into the coffers of the AstraZeneca shareholders. Unsurprisingly, AstraZeneca have given no guarantee of low and affordable pricing for the vaccine. It is inevitable that other companies will follow suit, in reality pilfering state money to develop a vaccine and then selling it back to workers at a high cost.

Thirdly, the race to develop a vaccine to rush to market has been the subject of much speculation and scrutiny by the scientific community. This race by companies to be the first to market has led many scientists to believe that an unsafe vaccine that has not undergone the necessary testing procedures will be introduced to the population preemptively.

Any vaccine developed must adhere to strict testing guidelines and procedures to ensure that it is not dangerous to use, but the economic rewards of being the first to bring a vaccine to market will drive companies to cut corners, endangering the lives of ordinary people. This is why it is imperative that an alternative to the profit-driven system of developing medicines and vaccines is developed – a system that is based on the needs of the working class globally, rather than the greed of wealthy shareholders.

Ineptitude of our rulers

In order for all the necessary steps to be taken to overcome Covid-19 safely – such as mass testing, contact tracing, strengthening healthcare systems, building public housing, ensuring worker safety in the workplace, and the development and distribution of a safe vaccine – it is essential that we break with the profit-driven capitalist system. The capitalist class has clearly demonstrated their ineptitude and callous indifference to the lives of working-class people in combating this pandemic, by treating workers as sacrificial lambs in the name of market fundamentalism and ever greater profitable gain. Working-class people must organise collectively to take control of the situation before even greater harm is done to individuals, their workmates, their families and society.

This means ripping the control of the key aspects of the economy from the hands of wealthy capitalists, the billionaires, the shareholders, and placing them into the public ownership of the working class to be run collectively and democratically in order to ensure that the needs and safety or ordinary people are met.

Instead of these pharmaceutical companies each working in secret to develop profitable vaccines and drugs, these efforts should be coordinated among scientists and the public on an international scale. Sharing of medical information would massively improve the international search by scientists for an effective and safe vaccine. The need to share medical research information and a response to the pandemic based on people’s needs, not profit, points towards taking the major pharmaceutical companies and hospitals into public ownership.

These companies already have global supply and distribution chains and trained personnel. With the additional workload, it will be necessary to employ more people, but on stable contracts and under good conditions. Research and technology previously held in silos by different companies should be collectively pooled.

The system change we need

Mainstream capitalist political parties have proven their unwillingness to implement measures to protect society and everyone in it. The working class needs to organise in their workplaces, but also needs to construct political parties of their own that are made up of and represent working-class people. These parties must be socialist parties, equipped with socialist analysis and solutions to the myriad of systemic crises that capitalism itself is plagued with. The Socialist Party in Ireland – linked with International Socialist Alternative – is just the organisation that is capable and willing to achieve this goal.

The choice between socialism or the destruction of our living standards and planet is becoming increasingly clear. Capitalism, a system rooted in profiteering and reckless competition, needs to be overthrown. A different society and world is possible — a socialist one. Through socialist change, all of this change and a brighter tomorrow can be won.

This would be a society based on utilising technology and the talents and capabilities of the working class effectively through democratic planning and public ownership of society’s wealth. Planning would mean immediately directing these resources to where they are really needed and would overcome the anarchy of this rotten capitalist system. 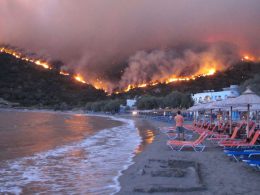 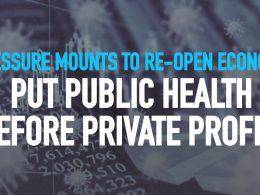 Now pressure is building in many countries across the world for an ‘’exit strategy’’ from the shutdown. This pressure is not coming from working-class people.
bySocialist Party
99 shares
99
0
0

No to the war in Ukraine! Troops should return home. Build an anti-war movement in the workplaces and…
bySocialist Party
1 share
1
0
0