The Socialist Party takes extremely seriously posts on social media over the last days regarding allegations of sexual assault and abuse of young people by a young member of the Party. These appear to relate to a time before he joined the Socialist Party. Nonetheless, we take them very seriously and we appreciate how difficult it is for the young people to speak out as they have about their harrowing experiences. We have suspended the person in question and an investigation is underway. This investigation, in line with our agreed policies and procedures, is being led by our Safeguarding Officers. We will seek to respectfully communicate with the young people so that their allegations and testimonies can be part of the inquiry.

Over the same timeframe, another series of posts of a vague and general character alleged another party member had engaged in inappropriate behaviour. Elsewhere, they allege abusive behaviour. Even though specifics were not raised in these posts, we have initiated an investigation by our Safeguarding Officers, as we are anxious to deal proactively and quickly with any allegations. The member has been suspended without prejudice pending the investigation. We are currently engaging people, including those who posted, and any specific allegations will be investigated as people’s safety is our priority. We hope to conclude both these investigations within a two to three-week period.

Below are links to the Complaints and Safeguarding procedures that the Socialist Party agreed at its Conference last November 2019. These were passed after considered discussions aimed at trying to ensure they are as strong and as effective as possible. We are committed to constantly reviewing how these policies and procedures can be improved to ensure our Party is a safe place for everyone. At our Conference, we agreed that there would be a full discussion throughout the organisation with a view to adding to these documents, including a guide and code on how members should conduct themselves to maximise the safety and wellbeing of all.

We are committed to taking any concerns raised with us seriously. Our approach on these issues is connected to our strong fighting record, and the lead our members have given on repeal; abortion rights; fighting all forms of oppression, gender and sexual violence; fighting for the rights of the LGBTQ community, all young people and the broad working class, all of which we are committed to continue.

China: Has the Pandemic Strengthened or Weakened Xi Jinping? 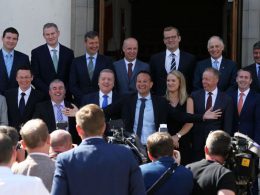