AOC and Joe Biden Should Not Be In The Same Party

By Keely Mullen, Socialist Alternative (US)

After months of attacks by the Democratic establishment against Alexandria Ocasio-Cortez and other progressives, she is firing back. Since her shock election to the House of Representatives in 2018, beating Democratic Party institution Joe Crowley, AOC has developed a following of millions because of her fearless telling truth to power, fighting for a Green New Deal, against ICE and supporting Bernie Sanders. For that alone she has earned the enmity of the corporate hacks who dominate the Democrats.

At any given moment she has juggled the wrath of the entire political establishment and pressures from the Democratic Party leadership to adopt the moderate, toothless approach that characterizes many of the party’s leading figures. The party’s leaders, like Nancy Pelosi, have come after AOC with bogus accusations of anti-semitism, not dissimilar from the recent accusations that Bernie Sanders is sexist. In both of these contexts, the attacks seem to ramp up from within the party just as these left-wing figures pick up steam. Lest we forget it was the Democratic Party establishment that undemocratically blocked Bernie in 2016 from winning the party’s nomination.

Last week in an interview with NYMag, AOC was asked what her role would be as a Congresswoman under a Joe Biden presidency. She groaned and responded, “Oh god. In any other country, Joe Biden and I would not be in the same party.” In this same interview she accuses the Democratic Party of being “too big a tent,” containing corporate cronies on one end and socialists like herself on another.

Just days later news broke that she was refusing to pay dues to the Democratic Congressional Campaign Committee (DCCC), the formal campaigning arm of the Democratic Party caucus in the House of Representatives. The DCCC, as AOC puts it, “has been an entrenched tool in a system that blocks working-class candidates from running for office, and protects out of touch incumbents.”

AOC’s boycott should be no surprise to DCCC leadership who, in March, announced that they would not work with any campaign or organization challenging a Democratic Party incumbent. Months ago AOC encouraged small dollar donors to end their contributions to the DCCC and instead donate directly to progressive candidates including those who challenge corporate incumbents. Of the DCCC she has said, “It doesn’t matter to them if those incumbents support Trump, vote for a regime of deportation, ask the Supreme Court to allow bans on abortion, or stand with the NRA.”

She has now taken this a step further by launching a PAC that supports “working class champions” running for office who have been blacklisted by the DCCC. This move has earned her the reinvigorated wrath of party leaders and the corporate media who criticize her for not being a “team player.” Funny because it’s clear she was never welcome on the team in the first place. In fact, her own battle for reelection will be highly contested — already 11 people have thrown their hats in the ring to challenge her.

Bernie Sanders vs. The Democratic Establishment

AOC is not the only left-wing politician facing down the Democratic leadership. As Bernie Sanders’ presidential campaign has picked up steam, the media blackout around his campaign has quickly turned into its opposite — an all-out assault. In a Fox News article, Representative Gregory Meeks from New York, a Democrat, is quoted as saying: “His [Bernie’s] revolution is to not just to stop the Republicans, it’s to blow up the Democratic Party.”

Bernie is currently leading in Iowa and New Hampshire, the first primary states, and in a desperate attempt to undercut his momentum over the coming months, everything but the kitchen sink will be thrown at him. Just this week, Elizabeth Warren accused him of saying to her in a private meeting that a woman could never win the presidency. Something that for many Sanders supporters does not pass the sniff test.

This comes on the heels of revelations that Obama is prepared to stand in the way of Sanders’ winning the nomination.

Bernie and AOC Should Launch a New Party

AOC’s statement that the Democratic Party is “too big a tent” and that if there were a Labor party in the U.S. that would be her political home are an extraordinarily welcome sign. She is drawing broad conclusions pointing to the need for working class political independence. The Democratic Party leadership and the bulk of its elected officials are tied by a thousand threads to Wall St., the fossil fuel industry, big pharma, and the billionaire class at large. The establishment hates the social movements around Bernie Sanders as much as it hates the Republicans (if not more). A Sanders victory within the Democratic Party would represent the establishment dramatically losing control of the situation and would immediately pose the question of a split in the party.

The Democratic Party has no internal democratic structures and it does not allow for the genuine participation of party members. It is critical for working class people to deeply consider what it would take to turn such a party into a genuine workers party. It would require rooting out the influence of corporations and billionaires, kicking out establishment gatekeepers, developing a political program to which elected representatives have to cohere, and building – from the ground up – democratic structures within the party. Simply put, it’s less of a hassle for working people to build our own party from scratch.

In recent weeks, AOC has shown that she is not simply accepting the ideological chasms that exist within the party, she is beginning to build an oppositional infrastructure to challenge the party’s establishment. At the moment this is taking the form of the PAC she set up to challenge the DCCC. Similarly, Bernie Sanders’ highly organized campaign apparatus is also an objective threat to the status quo of the Democratic Party.

These two figures have both admitted countless times that being a socialist in the Democratic Party puts a target on your back. Bernie and AOC could lead millions of working class and young people out of the corporate straight jacket of the Democratic Party and into a new, truly democratic, party for the working class. While the recent moves from AOC are extremely significant, it is not the same as forming a new party. Bernie Sanders himself has not been as clear about the need for a new party, recently stating that he’ll unconditionally support whoever the Democratic nominee for president is.

In preparing for the intensifying mud slinging of the coming weeks and months in the Democratic Primary, we believe Bernie and AOC should begin laying the groundwork for a conference of their supporters, win or lose, after the primary to discuss next steps for the movement. At such a conference, we would urge them to launch a mass membership organization with democratic structures. If Bernie wins the Democratic nomination, such an organization would be essential in mobilizing to decisively defeat Trump and win Bernie’s program. If he loses, an organization like this would be desperately needed to carry the movement forward and not allow the momentum behind his campaign to dissipate. While a membership organization like this may not immediately take on the form of a new political party, and while it is very much up in the air whether Sanders himself will seize this opportunity, we see it as an essential step in continuing the momentum of his campaign. We need to begin building the outlines of a political party that can be a fitting home to socialists, trade union activists, youth, and all those looking to put an end to the horrors of our current system. 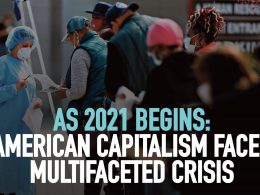 By Chris Gray, Socialist Alternative (our sister organisation in the US) Following the historic union victory at the…
bySocialist Party
1 share
1
0
0 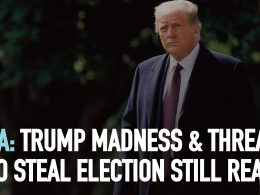 By Tom Crean, Socialist Alternative USA With less than a month to go until election day, the presidential…
bySocialist Party
10 shares
10
0
0