Article by Seattle Council Member and Socialist Alternative (sister organisation of the Socialist Party  in the US) member Kshama Sawant on where next in the battle against the Trump regime. Originally published on Counterpunch.org.

Donald Trump and his bigoted, billionaires-club administration have ignited a social explosion unlike any that has ever greeted an incoming US president.

The White House’s series of reactionary diktats have been met by three weeks of energetic and sometimes massive resistance. The historic Women’s Marches, perhaps the largest single day of protest in American history, were soon followed by tens of thousands of people shutting down airports with mass civil disobedience, and in the two weeks following waves of protests have continued across the country.

Already social movements have won some victories, including the temporary reversal of the administration’s bigoted immigration ban, demonstrating in action that Trump and the billionaire class are not immune to upheaval by the 99%.

We have also seen strategically important developments like the New York Taxi Drivers Alliance going on strike in solidarity with protesters, and Comcast workers walking off the job in Philadelphia last week. While only small initial steps, the sleeping giant of the American working class is stirring.

The pace of events has been stunning. Calls to escalate the resistance have grown, with strike action and mass civil disobedience being widely discussed. Now the organizers of the January Women’s Marches, joined by Angela Davis, have called for a “Women’s Strike” on March 8, International Women’s Day, in concert with a global call to action by socialists and others. This followed on the heels of a series of proposals for massive protests on Earth Day, and a growing discussion about strikes on May 1, International Workers’ Day.

At the same time a debate has been opening up on the left: What is the strategy necessary to defeat the Predator in Chief, the far right elements stirred up behind his attacks, and the broader neoliberal agenda of the billionaire class? How can we mobilize and where should we focus the enormous potential power of social movements and the working class?

We should be clear about the political terrain: Trump has no mandate and heads a weak government. He entered office with historically low approval ratings, which have fallen further since inauguration day. No president in modern American history has seen majority disapproval levels in the first year in office, yet Trump managed it within 8 days.

But Trump and the Billionaire Class only understand one thing: power. It is already clear this administration plans to brutally attack one section of the 99% after another, and will not be easily deterred from its bigoted, misogynist, and anti-worker assault.

Fighting Trump and the Billionaire Class

Our task is a historic one. We must shut down Donald Trump’s agenda, or else drive him out of office.

As a socialist, I believe we must base ourselves on the broadest unity in action of all those forces prepared to seriously fight this dangerous administration. This should include unions, immigrants, women, black lives matter activists, LGBTQ people, environmental organizations, Greens, Sanders supporters, socialists and progressive Democrats. We should also appeal to draw in sections of the 99% who were conned into voting for Trump, but on a firmly anti-racist, anti-sexist basis.

We cannot only react to Trump’s right wing assault. We will need to put forward audacious demands that can inspire with the promise of a dramatic improvement in people’s lives, like those popularized by Bernie Sanders, including: a Medicare for all, single-payer healthcare system; a federal $15 minimum wage; free higher education; taxing the rich to fund massive public works program to create jobs and rebuild our infrastructure, develop green energy, and mass transit; demanding that Black Lives Matter and for an end to the racist mass incarceration state. Bernie’s bold program energized millions, especially young people, while Hillary’s timid, corporate-friendly proposals of tinkering around the edges failed to mobilize them.

There is no avoiding that there are major political differences of strategy and social interests in this movement. While uniting in action, we need to continue to have honest and open debates about the way forward.

We must base ourselves on the needs of the struggle against Trump and the Billionaire Class. We cannot let it be subordinated or restricted to the limits of what the corporate leadership of the Democratic Party will allow. Democrats in Congress will continue to be put to the test in terms of their willingness to stand firm against Trump.

It is a welcome step that Democrats, under pressure from social movements and their own base, voted unanimously this week against Betsy DeVos as Secretary of Education, forcing a historic tie-breaking vote in the Senate. They also succeeded in peeling off two Republican votes to join their opposition to her confirmation. Yet 14 Democrats, including Hillary Clinton’s former running mate Tim Kaine, had voted for every other one of Trump’s cabinet picks prior to Devos, and the party continues to fail in giving a consistent lead in the fight against Trump.

As a socialist, while I respect the genuine efforts of groups like Our Revolution to reform the Democrats, l do not think the Democratic Party will offer the kind of combative, working class, and movement-based leadership that will be needed to confront a ruthless foe like Trump. We will need to build an alternative to the right-wing Republicans and Wall Street Democrats: a new mass party of the 99% that rejects all corporate donations.

We must work to develop a powerful, united and fighting movement, with our eyes wide open to the challenges we face.

Stopping Trump will require a massive escalation of our struggle.

Symbolic protest will not be enough. We will need to continue to disrupt “business as usual” as we did at the airports, engage in peaceful mass civil disobedience, and build towards strike action by the wider working class to shutdown strategic sections of the economy and infrastructure.

This week’s call by the organizers of the Women’s Marches for a “Women’s Strike” on March 8 presents a huge opportunity for our movement.

We should fully seize this potential and use it to mobilize the broadest possible forces to International Women’s Day protests, and further as a springboard for strikes and mass action by immigrants and the wider working class on May 1.

This is the most powerful tool we have: when workers withdraw their labor, shut down businesses from functioning and cut off corporate profits. A frightened Billionaire Class pushed back against Trump after the “chaos” that protests against his Muslim Ban created at the nation’s airports. This is just a hint of the enormous potential power the working class has to disrupt the administration’s agenda.

Hundreds of thousands of women (and men) calling in sick to work, collectively walking out, taking the day off, or organizing in their workplace to leave early and join mass protests (as happened in Poland last October), would itself be a huge development, even if no formal strikes take place. It would send a powerful message to the Billionaire Class that further support for Trump’s agenda could lead to even greater disruption and upheavals.

Workplace action can take different forms. A nationwide general strike, while the most powerful, is not immediately in the cards, as pointed out in a recent Jacobin article. Furthermore, activists should not leave work if there is not strong enough support to avoid them getting fired, but instead join the protests immediately after work. Our strength is in numbers and organization, which is why the labor movement and the left should urgently take up and build for broad participation.

Rank-and-file union members and left labor leaders could bring resolutions within their unions, starting now, for strike action on March 8 and May 1. These proposals can help fire up a badly needed debate within labor about the need for decisive working class struggle against Trump’s anti-worker and bigoted policies, which of course poses a life-or-death threat to the US labor movement as a whole, particularly with national “right to work” legislation on the agenda.

In some cities, resolutions could be brought forward in labor councils for citywide, one-day general strikes on Mayday.

At the same time discussion within social movements should be engaged about what will really be required to build broad strike action going forward, and using the debate to raise class consciousness.

All of those determined to resist Trump should help build toward escalating resistance in the coming weeks, including organizing now and planning for mass peaceful civil disobedience and shutdowns of highways, airports and other key infrastructure on March 8 and May 1.

We must recognize there is no simple, straightforward and escalating path to victory, that our battle will often be fought uphill, and that we will encounter setbacks.

Trump can be defeated. But to do so we must base ourselves on bold struggle, unity in action, and the enormous social power of the American working class with it’s potential to shut down the capitalist system.

There is no time to waste. 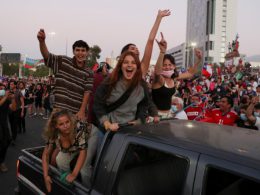 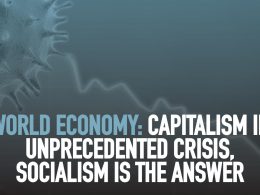 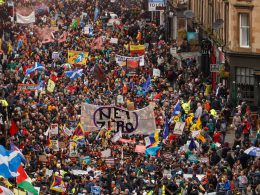 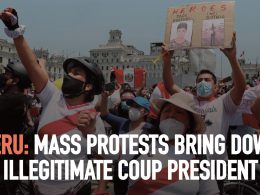 Emily Culver, Socialist Alternative (Our sister organisation in the US) Tens of thousands of protestors have taken to…
bySocialist Party
1 share
1
0
0