Keishia Taylor interviewed Suzanne Wrack, Women’s Football Writer for The Guardian and Socialist Alternative (our sister organisation in England and Wales) member, on her way to Lisbon – the first time The Guardian had sent someone to cover an international women’s friendly!

The Women’s World Cup was extremely significant this year, with the equal pay campaign and the wonderful Megan Rapinoe. What made this year so special?

What’s so fantastic about this world cup is that big disputes over equal pay and expenses coincided with women’s football growing and getting more investment. The US team shattered the idea that if you want equal pay then you have to generate the same amount of money as the men’s team, because they have been doing that since 2015! It’s much more ideological than that – it’s about profits for the top of FIFA and generations of holding women’s pay and conditions down because it impacts the money they have available for themselves and the men’s team.

Rapinoe saying she’s “not going to the f*cking White House” put her in the spotlight and when it was announced that the prize money would be doubled, she said “double it again!” – she’s really embracing the role of constantly pushing things forward. And football commands a huge amount of respect! People often follow what their team or national team does extremely closely, so it wields real power to be a leader on challenging issues of sexism, racism, etc. and positively change things.

The feeling that enough is enough and unashamedly pushing things forward can be seen elsewhere in the global feminist movement as well.

Do you think the players are inspired by other movements?

Nothing exists in isolation and everything has a context. I think the attitudes that are reflected in society are reflected in and through football. I’d say Rapinoe is definitely looking at other movements and drawing inspiration, taking a knee in support of Colin Kaepernik and things like that. When you see things like #metoo, I think it’s innate solidarity. Just by playing football, female players are breaking with stereotypes and traditional gender roles in a way that isn’t necessarily a conscious political act, but they are playing an important role.

You broke the #metoo story in the Afghanistan FA – could you tell us about that?

I had interviewed some of the Afghanistan women’s team the year before, so when I heard rumblings about terrible contracts with no rights I got in touch with the players and from there I approached the team manager who connected me with some of the victims. It was great as a journalist to be able to publish a story that had a material effect on the players, particularly when the legal system wasn’t going to help them. The players were very keen to widen the discussion, to say that this is definitely happening elsewhere and to support others to come forward.

Football is a part of society, it’s not in a vacuum. #Metoo has been happening everywhere, so the idea there wouldn’t be one in sport is ridiculous! These cases always existed but now we’re more confident to speak out on these issues and tackle them. There’s a growing consciousness around women’s rights and what is and isn’t acceptable.

No importation of fracked gas! 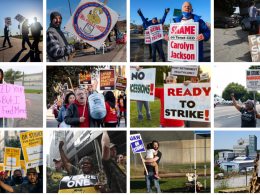 By Stephen Edwards, Socialist Alternative (our sister organisation in the United States) After 18 months of working conditions…
bySocialist Party 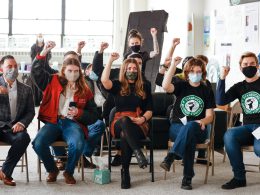 By Jesse Shussett, Socialist Alternative (our sister organisation in the United States) Less than a month after winning…
bySocialist Party
60 shares
60
0
0

A strange paradox emerges in the posture struck by the political and media establishment in response to two major issues dominating the news over the past two weeks – the treatment of women in the Magdalen Laundries and the continuation of the saga of the former Anglo Irish Bank.