Below is the text of the Socialist Party leaflet given out at Pride 2019 in Dublin.

Fifty years ago this month, members of the LGBTQ+ community in New York City took a defiant and courageous stand against oppression and discrimination in the Stonewall bar. The impact of this stand reverberated throughout the world and gave birth to the struggle for LGBTQ+ liberation. This movement has made many important gains in challenging and ending legal discrimination and homophobic and transphobic attitudes nurtured and fostered by a capitalist system built on division on oppression.

It is not for nothing the great American slave abolitionist Frederick Douglass said: “If there is no struggle, there is no progress”. Pride is a day of celebration of the historic victories we’ve won and the change in social attitudes that have taken place.

This battle for equality has not been won and globally the rights of LGTBQ people are coming under attack. Even in supposedly liberal Canada recently a number of Pride events have been attacked by the far right. There is an increasing amount of polarisation and while particularly young people are more positive towards LGBTQ+ rights than ever before, enemies of the community have been emboldened. The rise of the far right, as shown by the election Jair Bolsanaro in Brazil, who is a racist, homophobic and transphobic bigot is a horrendous example of this.

This is why Pride is, and must be, a protest. One against discrimination and inequality in all its forms. The fact that three million participated in Sao Paulo’s recent Pride protest, coming after a general strike against Bolsanaro’s anti-working class policies, shows that Brazilian LGBTQ people and working class, oppressed and young people broadly are not prepared to see their rights trampled on.

The state’s policies still back up bigotry against LGBTQ+ people. We still have a discriminatory ban on gay men donating blood. Four years after the marriage equality referendum, the state continues to deny LGBTQ parents equal rights over their children.

The trans community face particular oppression and inequality in a society which has rigid gender norms at its heart. A contributing factor to that is a healthcare system that doesn’t trust trans people, forcing them to answer personal questions to determine if they are ‘really’ transgender. There are only two gender clinics in Ireland, with the waiting list for Loughlinstown now at three years, up from 20 months last year. We need a secular national health service that is free at the point of use that provides LGBTQ people with the healthcare they need.

This government is a block on winning social gains. They are blocking the Solidarity Sex Education Bill which provides for objective + LGBTQ inclusive sex education in schools, regardless of religious ethos.

At the heart of the conservative nature of this state is the Catholic Church’s continued control over the majority of schools and hospitals. A fight for genuine inclusion and equality means fighting for separation of church and state, and taking all church owned land that schools and hospitals reside on into public ownership, with no compensation.

This means that pride must be a protest, as well as a celebration. We need to know who our real allies are. The corporations and right-wing politicians here today, are here only because society and public attitudes have been changed by grassroots movements. They are presenting an image of a progressive, inclusive capitalism which is far from the reality of the majority of LGBTQ+ people. Fighting for diversity in the elite is not a solution.

An openly gay Taoiseach is an important sign of progress, but Varadkar’s right wing and regressive agenda represents an attack on working class LGBTQ+ people who need affordable housing, access to healthcare and a decent standard of living. Instead we need a working class movement that links up with those fighting for women’s rights, migrants fighting the obscenity of direct provision, and is willing to challenge oppression.

Any such movement cuts against the grain of a capitalist system that fosters division, inequality and conformity. We must end the rule of this system. We need to fight for a democratic, just and truly humane  socialist society where its wealth and resources are seized from the hands of big business, developers and the super-rich and placed into democratic public ownership. On this basis we can build a society based on solidarity and equality. A society where planning for need not profit can abolish want and insecurity and allow each human being to develop their full potential. 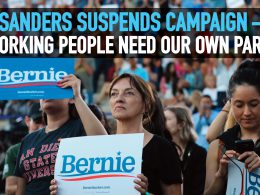 By Kshama Sawant On Wednesday, Bernie Sanders announced that he was suspending his campaign for the presidency, effectively…
bySocialist Party
18 shares
18
0
0 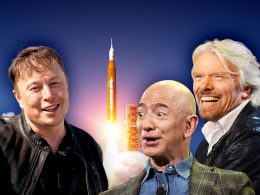