Around 8,500 Glasgow working class women made history on 23-24th October, when they took industrial action. As the BBC news commented, it was the “one of the biggest ever strikes in the UK on the issue of equal pay”. In truth, it was more like an uprising in which the power of the working class was clearly demonstrated.

In a phenomenal logistical effort, picket lines were set up across hundreds of primary schools, nurseries, cleansing depots and council buildings. This achievement alone testified to the mass participation that was a hallmark of the strike. A colourful sea of 10,000 strikers, dominated by the flags, banners and placards of Unison and the GMB, as well as fellow trade unionists and supporters, marched in a noisy and vibrant demo on the first strike day that shook the streets from Glasgow Green to George Square.

Central to the mobilisation was the tremendous fighting capacity of low paid women workers who make up 90% of the strikers. Betrayed by the previous right wing Labour council who presided over the pay inequality scandal for a decade – and the new Scottish National Party (SNP) leadership who promised a just resolution but have dragged their heels – working class women had had enough.

Twelve years underpaid and undervalued, the strike reflected the pent up anger and also the experience of the last decade of vicious capitalist austerity.

As one striking marcher interviewed on the rolling news broadcast said: “We want fairness. I’m a single parent, struggling to support my family on £800 a month”. Striker Carol Qua made the point that she had three council jobs and was still struggling.

Finally the frustration was given an outlet; these workers enthusiastically seized their chance to show their working class power.

The strike began on the night shift Monday 22nd October with a mass picket of the headquarters of what was Cordia (the failed ‘arms-length’ body created under the New Labour administration). Then in the dark morning of Tuesday, hundreds of picket lines assembled across the city.

You did not have to walk very far to find a picket line or hear one! After the pickets finished, a sea of strikers then flooded Glasgow Green to muster for the demonstration.

The 75 bus from Castlemilk was seated almost entirely by strikers singing and chanting their way to the demonstration. Bus drivers let strikers on for free to travel to Glasgow Green. There was mass support from the public. As the demonstration came into the city centre, shoppers applauded. This was despite a barrage of anti-strike propaganda by the council in the press in the fortnight leading up to the strike.

Council management in Land and Environmental Services initially threatened to discipline any worker who did not work during the strike. On the morning shift, and in a marvellous display of solidarity all 600 refuse workers, almost all of whom are male workers, walked out in solidarity with the Equal Pay women picketing the depots. The entire refuse collection service was shut down.

John O’Connor, GMB rep for the city’s refuse workers, said in the Herald newspaper: “We all know about the equal pay strikes today and tomorrow. As cleansing operatives we came into work this morning to go about our normal business and present ourselves for work, but we didn’t want to cross a picket as we are in total support of the women.

“Management came into our canteen and read out an official statement from the council stating that if we didn’t go to work there’d be disciplinary action taken against us. They basically said if you don’t cross picket lines and go to work you won’t be getting paid. In support of the women the guys in cleaning came out to support them wholeheartedly in the fight for justice.”

Everyone who has knowledge of the history of the campaign for Equal Pays knows a common example given to illustrate the issue is that a bin worker (male majority workplace) under the pay scheme earned £3 more than a female workers on the same grade.

This reality made the secondary solidarity action, with the refuse workers now losing pay in class solidarity to strengthen the striking women, extremely symbolic and powerful. Parts of social work and the Glasgow Life arms-length organisation also refused to cross picket lines and took solidarity action.

The mass demonstration filled George Square. After an emotional silence for those Glasgow workers who have tragically died without equal pay, striking women and their trade unions reps made powerful speeches.

UNISON trade union branch chair Mary Dawson said: “These women are the cogs that keep our city turning – cleaning, caring, educating and looking after some of the city’s most vulnerable people – and they have not taken the decision to strike lightly. Yet despite the vital services they provide, their roles are still chronically undervalued. It’s time Glasgow City Council took action to resolve this long-standing injustice so these women can continue to provide the services we all rely upon.”

Shona Thomson GMB home care branch Secretary said: “We do know why we are we here. We are going to win. We want justice. No more pitting low paid men and women against each other. We are angry, having waited for years. Councillors who say they are on our side need to take us seriously. I’m a carer and a union rep because I care. I don’t need council officers and the chief executive telling me my works important if they aren’t prepared to really value it”.
SNP exposed

The SNP have been able to whip up some support, mainly on social media, against the strike claiming falsely that the trade unions are pawns of Scottish Labour, that the strike is only taking place due to Glasgow being a SNP council.

Labour Party leader, Jeremy Corbyn, and Richard Leonard, Scottish Labour leader, did give welcome support to the strike but failed to denounce the previous New Labour council’s actions, which only lends weight to accusations of opportunism.

Glasgow City Unison is able to counter the SNP’s claims by its militant history of fighting twelve strikes for fair pay against the pay scheme, mainly when Labour was in power. And that they never accepted the unequal Glasgow pay scheme as an agreement.

The reason for the strike taking place now was the Court of Session Judgement in August 2017 that ruled the Glasgow pay scheme was unequal and unfair. The 21 “meetings about meetings” approach of the SNP administration since only rubbed salt into the wounds. The women gave the SNP a chance after the consultative ballot in the summer but the administration let them down over the negotiation process. Striking was the only way to build the pressure for a negotiated settlement.

Susan Aitken, SNP council leader, poured petrol on a fire by suggesting that the strikers did not “understand the reasons” they were taking action. This was effectively answered publicly by the unions, and especially and eloquently every time strikers were given a voice in the media.

Disgracefully, council officers and “spokespersons” ran a scaremongering campaign targeting the home care strikers, publicly raising concerns that there would be fatalities and hounding the trade union over the issue of life and limb cover.

The SNP administration and council officers also tried divide and rule. They called off negotiations with Unison and the GMB union as punishment for organising the strike. They would only negotiate with the Action 4 Equality lawyers and the non-striking Unite union. However, all the claimant organisations were united in rejecting this approach. You talk to us all or you talk to no one!

Socialist Party Scotland (CWI) has played a crucial role in this dispute. Our members play a leading role in the leadership of Glasgow City Unison, whose members made up 5,500 of the 8,500 strikers.

We have been building solidarity and strike fund donations over the last few weeks. We distributed thousands of our well received strike leaflet on the demonstrations and pickets.

We argued that the SNP, just like New Labour before them, have no right to claim to be anti-austerity if they pass on Tory cuts, attack terms and conditions or refuse to implement Equal Pay schemes.

Politicians have to choose which side they are on? Labour was thrown out of power in Glasgow and the same could happen to the SNP. We raised the demand that the Scottish Government and Glasgow City Council meet the cost of Equal Pay, estimated to be up to £1 billion, and set fighting no cuts budgets and defy Tory cuts.

We are in full agreement with Unison steward Jean Kilpatrick’s speech at the rally, saying the unions would not accept “robbing Peter to pay Pauline and cutting services to meet the cost”.

We also highlighted this strike as an example of what can be achieved and that it should serve as a wake-up call to the trade union national leaders to call co-ordinated action against cuts and austerity.

A political consequence of this strike is that the illusions in the SNP, who were elected on anti-austerity promises and a commitment to fund equal pay, are being burnt away. Class struggle is exposing the real anti-working class character of the SNP leaders.

Susan Aitken has responded to the strike by saying she still does not understand why it is taking place and that is it unjustified. The council officers also accuse the trade unions of losing control of the strike. In fact, it is they and the SNP administration who are losing control of the situation. It is now possible unless they come up with a negotiated settlement quickly this will escalate into a political disaster for them.

The first 48-hour strike has had a massive industrial and political effect on Glasgow and beyond. The working class has shown its power. The unions would be fully justified in escalating the action and calling more mass strikes unless the council move to pay these low paid workers what they are due. Such a process would drive further political conclusions and raises the need for a genuine anti-austerity mass party that fights on socialist policies.

It was fitting that this example of the power of the working class came just a few weeks before the 100th anniversary of the revolutionary events of ‘Red Clydeside’, in January, 1919.

History is being re-made. And it is working class women and men, allied to fighting socialist policies that will make it.

On Tuesday 12 March, the audio recording of a former United States Army soldier’s speech to a military court, in which he gives his reasons and motivations behind disclosing over 700,000 government documents to WikiLeaks, was released. 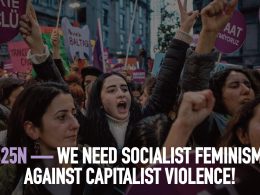