Mobilise on Monday to shut down Greyhound

James Connolly’s ringing appeal to the working class of Dublin in December 1913 resonates:

“Could we consent to the victimisation of workers who refused to sign a document which everybody of common sense denounces as iniquitous? We could not!

“There may be somewhere trade union leaders who can regard with calmness the certain victimisation of a number of their rank and file, but, thank God, we are not of their number. We regard the rank and file fighters as the real heroes of this struggle, and we will never consent to their being sacrificed, not while there is a shot in our locker or a shred of our organisation together.

“We have no fear or doubt of our ultimate success in this fight, but if we had we would not consent to the sacrifice of those who had trusted us and honoured us by their trust. We would rather go down nobly fighting for our noble comrades than survive ignobly by consenting to their victimisation.”

This lockout gets to the heart of key issues in Irish society today. It has become a struggle, not just for Greyhound workers’ pay, but for the defence of trade unionism and workers’ rights.

It comes at a time when a recovery is being generally proclaimed by the government, when profits are shooting up for big business, but with wages continuing to stagnate or decline. Greyhound epitomises the reality of that ‘recovery’. It is a recovery only for the rich and big business who have used the crisis to drive down wages and conditions to restore profitability for themselves. The banner has been changed from ‘austerity’ to ‘recovery’, but the policy remains the same – a race to the bottom in wages and conditions.

The lockout is a serious threat to the whole trade union movement. If unionised workers can be presented with a demand for a 35% pay cut, locked-out for refusing to accept it and then denied the right to effective picket, the question will be asked – what is the point of a union? The trade union movement must be able to protect unionised workers from these brutal assaults.

The granting of blanket injunctions against any interference with Greyhound operations is a challenge to basic democratic rights to effectively protest and picket. In order to obtain the injunction, Greyhound in court relied upon screenshots of Facebook pictures and even Facebook ‘likes’ in order to establish a linkage between, for example, one of the SIPTU organisers and the community protests against Greyhound. This is a threat to the right to privacy as well as the right to protest.

The just struggle of the locked out Greyhound workers is therefore a fight for all workers. Eight weeks have passed, whereby the locked-out  workers, following the advice of SIPTU, have remained within the framework of the Industrial Relations Act. This allows informational pickets, but not pickets that stop the trucks being driven by the scabs who have taken the job of the locked-out workers. These pickets have been supplemented by community protests and pickets at the site in Clondalkin, where supporters including those from various groups on the left, have mobilised and have effectively shut down the site for hours at a time.

Huge support from trade unionists across the board has been evident. Unite, Mandate, Impact, the CPSU, CWU and TEEU have all made donations to the workers, with their leading members visiting the picket lines. Shop stewards from unionised workplaces have visited to show their support. Trade unionists from Nigeria, Paraguay, Denmark, the US and elsewhere have all indicated their support. Whenever workers are protesting or picketing publicly, the beeps from passing cars confirms that there is broad public support for these workers.

It is clear, however, that so far, those actions and that pressure has not been enough. Michael Buckley seems to be hoping to starve the workers out, so that they drift away and he is able to continue with a low-paid non-unionised workforce into the future. That is a great prize for him and an incentive to try to ride out any minor disruption. What is necessary is major disruption of Greyhound that hits him hard economically and forces him to seriously negotiate with the workers.

If the strike is to be won, the banning of effective picketing cannot be observed. As the starting point of a different method of fighting this dispute, a mass mobilisation is needed to the site to shut it down. The Greyhound Workers Support Group is calling for a massive day of protest, assembling at 9am at the site at Crag Avenue in Clondalkin Industrial Estate on Monday 25 August. This is essential. If his work can be seriously disrupted for an entire day, it will open up a new more militant period of the strike.

Openly defying the injunction would pose a choice before Buckley about whether to implement the injunction or not. If the injunction is not applied, it is turned into only a piece of paper and effective picketing can keep Greyhound shut down. If he chooses to implement it and a locked-out worker is jailed for refusing to accept savage attacks on pay and conditions, he faces the prospect of a major movement of protest in support of and in solidarity with the Greyhound workers.

Either way, next Monday should be the start of a new phase of the strike – utilising militant tactics – blockades, secondary picketing, solidarity action – to hit Greyhound hard. While SIPTU will not endorse unofficial picketing, they should be put under pressure to do what they can officially. A major work-time protest should be organised in the city centre, involving all of the supportive unions, as a powerful display of strength and unity of the workers, and a means of putting pressure on Greyhound and the government.

SIPTU should use its connections with other workers who interact with Greyhound or handle Greyhound’s waste to argue that they stop any co-operation with this company. Informational pickets should also be placed on unionised workplaces which use Greyhound.
Reclaim the trade unions

The dispute also raises broader questions about the state of the unions. How have we arrived at a point whereby the only unionised workers in Greyhound are the bin workers themselves, with the administrative staff and those who sort the waste not unionised, and where Buckley feels confident to attack the workers so brazenly? There is a legacy of a failure of the SIPTU leadership to defend the interests of bin workers.

This goes back to the struggle against the bin tax, where SIPTU officials instructed bin workers to cross protests of anti-bin tax protesters. The defeat of the movement against the bin tax, in which SIPTU played a very poor role, opened the door to privatisation, which in turn accelerated the attacks on wages and conditions. The result is felt today by the Greyhound workers. SIPTU and the trade union movement generally need to be reclaimed by the membership and turned into the kind of fighting militant democratic organisations that James Connolly fought for.

All out on Monday. Shut down Greyhound. 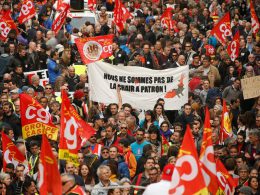 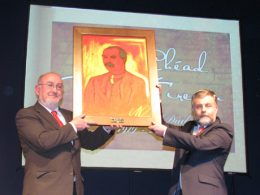 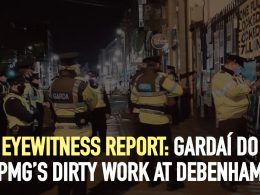