It is simply based on an acceptance by many of the union leaders that there is no alternative but to accept austerity.

This is wrong – this refusal to organise a fight back against austerity is allowing Fine Gael and Labour to drive ahead with their race to the bottom for wages and conditions in the public sector.

The SIPTU NEC, in a statement issued post their decision to recommend a yes vote on Haddington Road, stated: “If the Government legislates to effect cuts unilaterally in the event of rejection of these proposals we will move immediately to a ballot for industrial action and for strike action.”

The government has passed the Financial Emergency Measures in the Public Interest Bill – this allows them to unilaterally cut pay and pensions, to change allowances and terms and conditions of public sector workers.

The passing of this legislation should have been the signal for the SIPTU NEC and all other unions – public and private – to organise a one-day general strike. This draconian legislation gives the government unprecedented powers over public sector workers and should be fought until it is removed from the statute books.

No one was surprised when after rejecting Croke Park II the pro-partnership union leaders came back with Haddington Road – a rehashing of the same €1 billion in cuts.

The union leaders claim that this deal is the best way to defend terms and conditions. This is a false claim – this form of “lesser evilism” will just result in further attacks – as the government will seek even more and more concessions – justifying it each time claiming that it is necessary to turn the economic situation around.

This whole process has exposed the rottenness of many of the union leaders who have fully capitulated to the idea that there is no alternative to capitalism and it’s austerity policies. More than that – it is also a reflection of the close connection by these same union leaders and the leadership of the Labour Party. The likes of the SIPTU, IMPACT and INTO leaderships are complicit in assisting Labour in government implement this €1 billion in cuts.

Austerity the cause not the solution

Austerity has not only failed – austerity is the key reason why this economy is still in deep crisis – why there is no prospect of a recovery – no hope for the 450,000 unemployed – the 300,000 emigrants – no relief for all who are being hit by pay cuts and the austerity taxes. Haddington Road will further weaken the economy and will result in job losses in the private sector.

The rejection of Croke Park II shows that public sector workers have had enough of austerity. With real leadership a struggle against the government’s agenda could be fought. With a clear strategy of industrial action – including united action by all 300,000 public sector workers in the form of 24 and 48 hour strikes – this government could be brought to their knees and the €1 billion in cuts stopped.

This form of struggle would also be a signal for a real battle against all of the austerity cuts that are destroying the health service and the education system. A struggle to end all austerity needs to be fought – the partnership approach failed decades ago.

We need a new approach to trade unionism – a reconnection with the past – with the methods and ideas of 1913 – of Larkinism – of taking on the employers and the government head on with a militant struggle based on using the industrial power of the working class.

The no vote to Croke Park II also shows that there is widespread opposition to the collaborationist approach of the right wing union leaders.

This opposition across all unions needs to harnessed into an organised fight back against union leaders who should be immediately removed.

What we have we hold

Opposition activist and membership based groups need to be built in all unions around a programme of putting the defence of members’ conditions first – what we have we hold – should be the slogan around which the members are mobilised.

A struggle to democratise the unions is essential – in order to break the power of the unelected and unaccountable full time officials. The Socialist Party campaigns for the election of all trade union officials and for the right of recall. Trade union officials should not be earning €100,000 plus salaries. They should be on the average working class wage – living in the same conditions as their members – not the bosses! If austerity impacted on the union leaders as much as the members would they be so keen on accepting these deals?

The Croke Park II and Haddington Road agreements plus the imposing of the Property Tax and next the Water Charges also shows the need for a political opposition to austerity.

Capitalism has failed. The pro-market establishment politicians have no answers and no solutions beyond heaping misery upon working class and middle class people in order to pay for the crisis of the super rich.

As well as struggling to reclaim the unions, we also need to build a political alternative to the failed establishment politics – we need a new mass working class party based on a socialist programme – as the only real solution to the crisis and the problems faced by the majority is socialist policies.

Voting no to the Haddington Road agreement is an important start – but it is only a start – get involved with others in your union to build a left oppostion to remove the rotten union leaders and replace with those who are willing to fight.

Become politically active – contact the Socialist Party today and find out how we can work together in the unions and also across society to fight austerity and build a new political movement.

"The union leaders had no mandate from their memberships to offer up compulsory unpaid leave of 12 to 14 days on top of cutbacks in overtime and unsocial hours premia and allowances arising from legitimate out of pocket expenses and additional educational qualifications".

Interview with an unemployed electrician

"I HAVE to sign at my local dole office once a month.Having lost my job at the start of September, I eventually got to sign on in November. 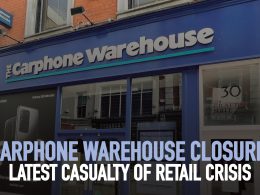 By Peter McGregor Carphone Warehouse has moved in recent days to shut down all of their Irish stores,…
bySocialist Party