The truth about the deficit

The following letter was sent by Paul Murphy MEP to Minister Varadkar, to clarify the facts made on the 27 January episode of The Week in Politics. Below is a link to the program for any who missed it,

The following letter was sent by Paul Murphy MEP to Minister Varadkar, to clarify the facts made on the 27 January episode of The Week in Politics. Below is a link to the program for any who missed it,

I hope you are well. Yesterday on ‘The Week in Politics’, we disagreed over a number of factual issues to do with the level of the primary deficit and the impact of a repudiation of debt. I would like to detail here the sources for my statements, which I stand over. I intend to publish this letter on my website (www.paulmurphymep.eu) in order to allow people to see the relevant figures.

I asserted that the primary deficit for 2013 was, according to government figures, slightly over €3 billion. This is confirmed by the government’s ‘Medium Term Fiscal Statement’ from November 2012. The table on page 26 puts the General Government Primary Balance for 2013 at -€3,250 million, i.e. a primary deficit of €3.25 billion.

A separate figure is also given on that page of an ‘Exchequer Balance’ which gives a primary deficit in 2013 of €8 billion. Which figure is more accurate? Table 1c of the ‘Ireland – Stability Programme Update’ from December 2009 (http://www.budget.gov.ie/budgets/2010/Documents/Final%20SPU.pdf) answers as follows:

“The General Government Balance (GGB) measures the fiscal performance of all arms of Government, i.e. Central Government, Local Authorities, Health Boards (prior to 2005 – their replacement, the HSE, is part of the Exchequer), Vocational Education Committees and non-commercial State sponsored bodies, as well as funds such as the Social Insurance Fund and the National Pensions Reserve Fund which are managed by government agents.  It thus provides an accurate assessment of the fiscal performance of a more complete “government” sector.” (my emphasis) It seems to me to be clear that the figure of the ‘General Government Balance’ is the figure that should be used.

In addition, I asserted that if we refused to pay the €9.1 billion in payments and the bailed-out bank bond payments this year, we would not need to borrow on the international markets and could in fact have public investment in jobs. Regardless of your political position on whether this is a viable strategy or not, I believe this to be self-evidently factually true.

The figures are simple. We are agreed, I presume, on the fact that the state will make payments on its national debt of €9.1 billion this year. In addition, however, what I pointed out yesterday, is that bailed out banks are due to pay €17.4 billion in bond payments in 2013. The details of these bond payments are available here. The banks have been bailed out with €64 billion of taxpayers’ funds in order to pay these bonds. When the Central Bank stress tested the banks in early 2011, they assumed that these bonds would all be paid. The banks are therefore fully capitalised to pay them.

Instead of these payments being made, with full nationalisation of the banking system, the money could be diverted to public investment and to write down mortgages. If all of the money was diverted into the state, together with a moratorium on payments on the national debt in 2013, there would be a ‘surplus’ of €14.3 billion. (-€3.1bn + €17.4 bn)

They are the figures. We can disagree about whether this debt should be paid or not, but that should be done on the basis of a debate based on the accurate figures.

The Socialist Party’s political position is for an immediate moratorium on the payments of all of these debts with a public debt audit committee into the nature of these debts and with a repudiation of all the debts except those owed to those with proven need, such as pension funds and ordinary workers. Although in advance of a public debt audit it is not possible to definitively say what percentage of debt would be repudiated, we believe that it would be substantial and could for example result in a reduction of the national debt to the pre-crash figure of €47.4 billion.

Many people, faced with the barrage of propaganda that there is no money to pay for public services and austerity is unfortunately necessary, may find these figures surprising. They may be shocking, but they are accurate. They demonstrate that austerity is a political choice in order to make working people pay for the crisis, rather than the bondholders taking the hit.

I look forward to debating these issues further with you.

The government’s proposed Household Charge of €100 is the forerunner for water charges and a property tax on every home.  A pensioner or low paid worker pays the same as a millionaire. How rotten!  This new tax has absolutely nothing to do with improving council services – the proceeds go towards the bailout of wealthy gamblers and bankers, for which ordinary people are being bled dry. 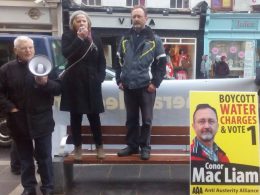 In a response to the 'Occupy Dame Street' camp which has been stationed outside the Central Bank since Saturday afternoon Socialist Party/United Left Alliance TDs Clare Daly and Joe Higgins will seek a debate in the Dáil this week around the demands of the camp. 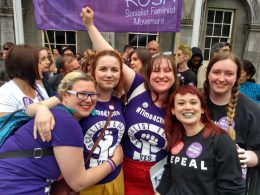 The historic victory for the abortion rights has been a beacon for all those fighting misogyny worldwide. Unfortunately,…
bySocialist Party