But this defeat hasn’t stopped big business from pressing ahead outside of the United States.  In Ireland, Labour Party Minister for Research and Innovation, Seán Sherlock is proposing making significant changes to Ireland’s copyright legislation which will effectively see a collective punishment of internet users taking place. While Minister Sherlock is claiming that the changes are necessary to bring Ireland into line with EU regulations, the real reason lies with the failure of the Irish Recorded Music Association (IRMA) to secure a court order forcing UPC to block access to websites like The Pirate Bay, as Eircom willingly did.

IRMA’s defeat in the courts has meant that they have changed their focus to having the legislation changed but the vagueness of the proposed changed goes beyond allowing the court to order that a particular website be blocked. Instead, it will effectively make ISPs, like UPC, responsible for what their customers view or download on the internet as technically, they will be facilitating illegal file sharing by providing access to the internet. The outcome will be the effective abolition of the concept of online privacy as ISPs scramble to protect themselves by monitoring the online browsing habits of their customers and effectively becoming online police.  It is also not ruled out that ISPs will also designate themselves as judge, jury and executioner also, restricting their customers’ access to particular websites in advance in order  to stave off potential legal cases.

Ultimately, SOPA Ireland will effectively change the whole concept of who exactly is guilty of copyright infringement.  In the past, the entertainment industry has normally had two options  – directly target the likes of The Pirate Bay and more recently, MegaUpload, websites which they claim are either involved in illegal file sharing or at least that they willingly facilitate it or attempt to put pressure on ISPs to block websites.  But SOPA offers a way around this by being deliberately vague about who exactly is responsible so that potentially anyone and everyone is responsible.  This means that website owners can potentially face being blacklisted by ISPs or even of being complicit in copyright infringement because of content posted to their website by users or because they link to, and therefore “encourage”, sites that host copyrighted material. It’s for this reason that even sections of big business, like Facebook, YouTube and other “user generated content” sites have opposed SOPA in the United States because they fear being held responsible for what their users post.

This “guilt by (very distant) association” is wide open to abuse as corporations search for vague copyright infringements on websites in order to take legal cases against them or more maliciously, by creating infringements in the case of “user-generated content” sites as the owner is potentially responsible for any material hosted on their site, whether they’re aware of its copyright status or not.

To illustrate what that means and how it could work, one can use the example of SourceForge, a website which assists and hosts hundreds of thousands of “open source” software projects.  For decades, open source software and technology (in short, software where the source code is accessible to user and can legally be manipulated, altered and shared freely, within certain limits, to suit the user’s desires or needs) and alternative operating systems like Linux have been resisted and actively fought against by “closed source” companies like Microsoft who fear that open source technology undermines their monopoly of the computer market.   This has been done through a variety of means, not excluding using claimed copyright and patent infringements to undermine projects.  In more recent times, as open source has become more mainstream and more profitable, numerous venture capitalist companies have appeared whose only business is to buy and sell patents  with a view to hunting down infringements in software and technology as a way of extorting profits through legal threats.

Under SOPA, if a project hosted on websites like SourceForge contained copyrighted material or should a project be consciously hosted there, the entire website could potentially be considered complicit and shut down.  This would be an enormous blow to the many small software developers and open source advocates who have long fought against the regressive impact that closed source monopolies have on the development of technology.  But one can how it would be of enormous benefit to companies like Microsoft and why it is prone to abuse.

And it is certainly not just in the realm of technology that such abuse and manipulation could take place.  Legislation like SOPA can quickly become a weapon in the arsenal of big business to be aimed at whoever they feel like it – trade unions, political organisations, alternative media sites etc.  And in Ireland, it will most certainly be big business and the wealthy that will have access to such a weapon.  Under the Minister’s current proposals, any court order would have to be secured through the costly High Courts which means that the costs involved in fighting against an application would also be restrictively high.  That is of course if you’re even notified that a court order has been applied for as the Minister’s proposals state that notification will possibly only occur, “where appropriate”.

Ultimately, SOPA represents an enormous strengthening of the power of the Courts and of big business to decide what we should and shouldn’t be allowed to look at or download and it must be resisted.

The tremendous response of people in the United States against SOPA and PIPA there was incredibly important and impressive as is the growing campaign in Ireland which must continue to put pressure on the government to prevent this change in the legislation.  But a successful campaign against SOPA Ireland cannot stop there.  The major multinational corporations which dominate the entertainment industry are already looking ahead to the Anti-Counterfeiting Trade Agreement (ACTA), an international agreement which, like both SOPAs and PIPA, is reportedly aimed at clamping down on online piracy but offers only the same invasion of privacy and the same restrictions on internet access. Under ACTA, not only will internet privacy be eroded but using websites which protect your identity will become a crime.

ACTA’s remit also goes beyond online piracy and the internet and will cover other “counterfeited” goods.   And while this might just bring fake t-shirts or knock off DVDs to mind, it will also affect important areas like healthcare and food production.   It is worth nothing that similar legislation designed to protect “intellectual property” has been used by the big pharmaceutical companies in the past to attack countries in the developing world for producing cheaper, generic drugs rather than buying their overpriced, patented versions.

At best, the two SOPAs, PIPA and ACTA will mean only a severe erosion of our privacy, at a level akin to that of the dictatorships around the world which regularly monitor the online habits of ordinary people.  At worst, they will fundamentally change how and what we access on the internet and treat millions of people and young people in particular as criminals for downloading and sharing their favourite films, music, books, software etc.

While the major multinationals involved claim that they are defending the rights of their musicians, their actors and playwrights, their authors and doing so in order to encourage creativity, nothing could be further from the truth.  The vast majority of entertainers, software developers and writers see very little of the billions of euro made in profits by these companies each year.  In many cases, even the biggest stars earn only a fraction of the profits that they make for major multinationals.  And even more often, millions of other creative and talented human beings are never given the option to develop their skills and talents as they are not worth the investment i.e. they’ll never make enough profits for these already super-rich corporations.

Attempts to strengthen copyright and intellectual property rights are nothing new but it has been difficult in the past to enforce them on the internet which has so far resisted the “enclosure of the commons”.  The enclosure of the commons marked a period in history when lands that were formally held in common by poor farmers and could be accessed by all were usurped by the rich and taken into private ownership and control.

Today, legislation like SOPA and ACTA aim to do the same thing to the internet by eroding our privacy and by increasingly deciding what we are and aren’t allowed to access.  Rather than encouraging creativity by curbing piracy as the entertainment industry claims, they are about dominating the internet and eliminating anything that undermines their enormous profits.  Instead, these corporations should be taken out of the control of private billionaires and returned to the commons.  On that basis, not only could we break the price monopoly enforced by these companies which limits access to those who can afford it but we could genuinely encourage human creativity by giving equal access to all.

There must be a referendum on the Austerity Treaty

Bail out people on the housing list, not the developers

The Socialist Party regularly get heartbreaking calls from people waiting years on the Council’s housing list. The wait is particularly desperate for anyone on the 2-bed list as none are being built in Dublin 15 by the Council.

Only 39 MEPs dared vote for ACTA 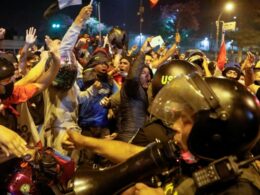 By Darragh O’Dwyer The impacts of the war in Ukraine are reverberating throughout the world, heaping more turmoil…
bySocialist Party
Read More

Alternative to austerity parties – political challenge must be built

At a book launch in early March Minister Pat Rabbitte apparently joked that he had spent another heavy day reducing the living standards of the Irish people! Despite being drenched in cynicism, for once he spoke the truth.