The turnout on the demonstrations surpassed the expectations of all, and represents a vital widening out of the movement. The media’s reports and the blatant lies they contain regarding the turnout, would leave anyone who participated in the demonstrations speechless. And these lies are easily exposed.

El Pais reports that “tens of thousands” took to the streets. This includes “42,000” in Madrid and “98,000” in Barcelona. But firstly, in Madrid, they also say that “over 1,000 police” were on the streets. A look at the pictures or videos of the protests will tell you that the implied ratio of 1 police for every 40 protestors is laughable! Secondly, the video below shows footage of demonstrators in Madrid. How many people are there? It seems that there are indeed clearly “tens of thousands”, in the shot of the camera alone, and you cannot see the end. But this is just one of six marches that took place in Madrid yesterday morning, leaving from the different sides of the city and province, which met in the city centre and were joined by many more people!

This, alongside the idea that the demonstration in Barcelona was over twice the size of the one in Madrid – the birthplace and epicentre of the 15-M movement, in many respects – is enough to rubbish these figures. In Barcelona, the demonstration was of similar or probably bigger size to that which took place on 29 September during the general strike. That march had 400,000 on it, according to the trade unions. Organisers in Seville have claimed that 70,000 marched there. There is no question that along with the huge demonstrations in Valencia, Bilbao, Murcia and many other cities, the combined total of indignados who marched yesterday adds up to many hundreds of thousands, almost certainly surpassing the 1.4 million who marched on 29 September 2010.

No longer a ‘youth movement’?

The pro-capitalist press and political Establishment spent the days before 19-J in a flurry of hostile attacks on the 15-M movement. They claimed that it had become “minoritarian”, hijacked by violent thugs, following the scenes engineered by police provocateurs at the peaceful blockade of the Catalan parliament on 15 June. Last Friday, Artur Mas, President of the Catalan regional government, called for “exemplary punishment” against those who had come out to try to prevent his government’s brutal violence – the violence of voting for savage cuts to health and education services – saying they represented “an undemocratic minority”. Esteban Gonzalez Pons, a PP leader, released a statement, distinguishing between “the 15-M of May and the 15-M of June”, the ‘peaceful’ and the ‘violent’, the mass movement and the ‘minority movement’. If Sunday’s protests represent a minority movement, we would like to see what a majority one looks like! But in a certain sense, Pons is correct to make a distinction between May and June. During May, we saw the explosion of a youth revolt, with the plaza occupations and camps, which gained wide support in society. 19-J has seen that revolt continue, but with other sectors of society suffering the brunt of the crisis, most notably the older working class, also taking action.

Although the demonstrations last Sunday were still made up of youth mainly, they were also marked by a huge participation of workers, families and even pensioners. And they came to protest and not merely to show their support for the movement of the youth – often with home-made banners and demands. In Barcelona, blocks of postal, refuse, hospital and education workers were out in force, among many others. In the context of the lack of a fighting lead from the trade union leaders, it is clear that many workers have begun to see the 15-M movement as their own. This is a crucial and hugely positive development, which must now be seized upon. The massive widening of the movement must now be translated into the formation of a mass movement, which can draw in the Sunday’s participants. In this sense, the proposals of Socialismo Revolucionario (CWI Spain) for a democratisation and linking up of the barrio assemblies, and their extension into workplaces, to build a mass movement from below, are now of an even greater urgency.

Step up the fight for a general strike now! Fight like the Greeks!

The main trade union leaders, from the CCOO and UGT, changed their approach over the few days leading up to 19-J, calling for participation by their members. This must be welcomed by the movement. But their last-minute support probably came after it became clear that, with or without their call, union members were preparing to flood the streets on 19-J. Socialismo Revolucionario stresses the need for unity between the youth and working class militants in struggle. The 15-M movement, so far, has been a magnificent example of how this unity can be achieved, not from above but from below, by appealing to workers and the base of union activists. 15-M must continue to develop as a movement which fights for a break with the de-mobilisation strategy of the union leaders, and builds from below a campaign for a new general strike against the tidal wave of attacks on living standards taking place. Initiatives such as the protest of thousands of indignados which took place outside CCOO and UGT headquarters in opposition to the leaders´ policy of pacts and collaboration and demanding a general strike, encouraged important union militants.

The demand for a general strike featured strongly last Sunday. Even the BBC´s correspondents felt forced to comment on it. The march in Barcelona had the demand for a general strike as one of its main slogans. Indeed, a general strike, which could bring the power of the working class into play and blow apart the already-weak government of Zapatero, or any rotten PP, or coalition government which could replace it. The union leaders (who are still busy discussing a sell-out on collective bargaining rights) may now or soon, under such pressure, call a general strike, maybe for a few months´ time, in an attempt to save face. But a general strike must be called to take advantage of the momentum of struggle currently building up. There is no question that general strike called now by the unions, built for and supported of 15-M, would bring the overwhelming majority of workers, both fixed and precarious, into action.

In Greece, the example of 15-M has led to social convulsions on an even higher level than in Spain. The richer experience of the class struggle in Greece in recent months, with 10 general strikes and the youth revolt of December 2008, is a big factor in this. Just as Spain inspired Greece, the Greek workers and youth now show the way forward for the Spanish fight-back. A 48-hour general strike has been called in Greece, probably to take place towards the end of June. In the spirit of internationalism, which is so deeply present in the current movement, the Spanish unions should simultaneously organise a 24 hour general strike, as an expression of the power of the working class across borders. Such a strike should be the first in a plan of action, democratically outlined by assemblies of a united mass movement, including a series of general strikes, escalating to 48 hours, and all-out action if necessary, in a fight to implement an alternative to capitalist crisis and austerity.

“Europe of the people, not of the markets”

The demands and slogans adopted by the protests represent a maturing of the movement. The Pact for the Euro, an agreement reached between European governments, which pushes a programme of austerity, cuts and pro-bosses’ labour ‘reforms’, was a focus for the protests. This, along with the general recent orientation of the movement towards the fight against cuts and the movement against evictions, represents a powerful instinct within the movement to appeal to the working class and to unify all those suffering the devastation of the crisis. With capitalism in a profound crisis, and its representatives united around the austerity offensive to make workers and youth pay for the crisis, such demands can only really be achieved when put in the context of a comprehensive programme to break with the dictatorship of the markets and the austerity which it dictates.

That is why Socialismo Revolucionario (CWI in Spain), which participated in the protests throughout Spain last Sunday, fights and organizes around revolutionary socialist policies. Only a break with capitalism and the alternative of democratic control over the wealth and key sectors of the economy, can genuinely beat austerity, and achieve real democracy, through a government of workers and youth. The slogan “For a Europe of the people, not of the markets” was everywhere last weekend, during hundreds of protests around Europe and beyond. With an international struggle of workers and young people, including an all-European general strike, based on such policies, this slogan could be made reality.

No home tax, no water tax - don’t let them get away with it! 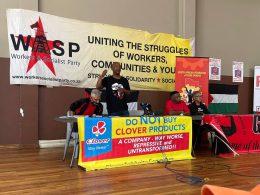 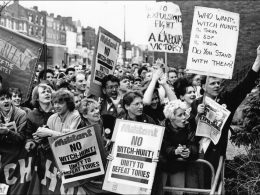 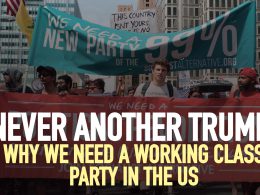