A spectacular amount of people were drawn into the streets on Tuesday 12 October for what was already the fourth “day of action” (mass demonstrations and strikes) in France since the beginning of September, reaching the record level of 3.5 million demonstrators nationwide, a 20% rise compared previous marches. No less than 244 demonstrations were reported nationally. Even the police were forced to recognise that in every city, participation was, once again, on the rise. Rarely in the rich history of the French class struggle could you find such a turn-out all on the same day. It seems like every move or comment coming from the government’s representatives is convincing more people to join the protests.

330,000 demonstrators in Paris, 230,000 in Marseilles, 145,000 in Toulouse,…the picture is the same everywhere. Despite the expressed expectations of Sarkozy’s government that the movement would exhaust itself, and despite the evident bureaucratic attempts of the trade union high-ranking leaders to push in the same direction, the movement is broadening; affecting the depths of the country. In Marseilles, a police union even attacked the official estimated figure for participation in the demonstration from the police as “false”, while in Paris, some police joined the protests. In Rouen, 1/8 of the city was on the streets, the biggest demo since 1995, “a veritable human wave”, as described by an activist from Gauche Revolutionnaire (CWI in France), who said, “in response to the slogan ‘it is now that we need a renewable general strike’ a lot of heads were nodding”.

Even capitalist newspapers are full of comments and interviews giving strong indications that the mood is moving towards further radicalisation. Criticisms of the conservative attitude of the trade union leadership, and against their refusal to take decisive action, are not missing either. “Members are fed up with simply strolling through the streets”, “We need to pass to a new stage, a new level of action” “the friendly walks ending in Paris’s periphery don’t lead to anything anymore, we need to harden the conflict”, “it is by immobilising the country’s economy that the government, voice of the bosses, will listen to us.”, etc.. This growing tempest of protests is polarising the whole political landscape, with even the opposition leaders of the so-called “Socialist” Party, who had earlier called for a two-year increase to the retirement age, asking now for Sarkozy to withdraw “purely and simply” its reforms, warning of the risk of higher confrontations.

Importantly, for the first time, young people – school pupils and students – have stepped into the battle in a decisive way. This was a powerful response, in fact, to the statements of some Sarkozy supporters; to the effect that the students and the youth are being ‘manipulated’ and that the debate on the pensions doesn’t concern them. According to some estimates, the raising of the retirement age would bring one million job losses, obviously affecting young people in a direct way. Moreover, the pension reform is only “the tree hiding the forest”; one of a massive wave of attacks that the French right-wing intends to impose. For this, Sarkozy is preparing to inflict a major defeat to the working class that could reverse the balance of forces between the working class and capital in a profound way.

A strong participation by the youth was noticeable on Tuesday’s demos, as about 300 colleges and 400 secondary schools were disrupted by strike action, with students joining the protests all over the country. In Rouen, the school-student contingent on the march was four times bigger than on 2 October. “Sarko, you’re screwed, the youth are on the streets”, chanted students in Toulouse, as they joined the protests en masse for the first time.

This has revived the fears of the ruling establishment; the connection between the youth and the workers’ struggles being the ‘traditional’ scenario, having forced previous French governments to retreat on important reforms in the past. “France’s centre-right is still traumatised by the events of May 1968 when students joined striking workers in rebelling against Charles de Gaulle’s economic and social policies” commented the ‘Financial Times’, evoking “A flavour of 1968 radicalism”.

And Sarkozy knows what is at stake. He was Interior Minister during the battle around the CPE in 2006, when the common struggle of young people and workers, and the threat of a general strike, forced the right-wing government of the time to withdraw its plan to introduce more flexible short-term contracts for young people.

Quoted by the satirical paper ‘Le Canard Enchaine’, Sarkozy declared recently “We must at all costs avoid the mobilisation of the youth. For a government, there is nothing worse than a junction between the social and the education front. I’m not talking about teachers who strike when they return from vacation, but school and college students. They must be watched closely like milk on a stove.”

Open-ended strikes spreading from below

Public transport, education, the metal and chemical industries, postal services, refineries and ports were significantly hit by strike action on Tuesday. But strikes were also reported in less “traditional” places: in Paris, hundreds of tourists were ushered away from the Eiffel Tower after the staff joined in the strike!

In the transport, the workers from the RATP (Parisian public transport) have voted in general assemblies for indefinite strike action from 12 October onwards. In a similar move, the SNCF (national railway network) unions have issued notice of renewable 24 hour strikes as well.

A strike at the port of Marseille’s Fos and Lavera oil terminals entered its 17th day. This strike and blockade is of strategic importance, since 40% of crude oil imported into France passes through these terminals. By their strike, the workers are hindering the supply of half the country’s oil storage sites! Also, workers at 11 of France’s 12 oil refineries, including all of TOTAL’s six sites, were on strike on Tuesday. The CGT’s TOTAL branch, which constitutes a majority of union representation in the refining industry nationally, has engaged in renewable strikes afterwards, forcing the halting of the operations at all the company’s French plants. Production at eight out of France’s 12 refineries has now been halted. The government has tried to minimise the risk of petrol shortages, arguing that France’s fuel depots contained ample stocks to keep petrol stations running for a while. But on Wednesday, striking workers started to block some depots as well.

The courageous actions of these workers cannot remain isolated, but should be assisted by similar initiatives being taken all over the country. Each renewable strike announced is a step forward in this direction.

The fact that a number of “grèves reconductibles” (renewable strikes) have started, and are being announced or discussed in a number of workplaces, marks a turning point. An impressive 61% of the population, according to a CSA opinion poll for ‘Le Parisien’, now backs open-ended industrial action! There is a striking lack of a clear leadership coming from national trade union officials. Bernard Thibault, general secretary of the CGT, declared his opposition to a general strike in a radio interview, rejecting it as an “abstract slogan which doesn’t correspond to the practices to improve the relationship of forces”. However, faced with this, an increasing number of workers, with their confidence boosted by the massive mobilisations of the last days, are not ready to wait any more, and are taking the initiative by themselves.

The question of an open-ended general strike is now blowing in the air. Sarkozy and the capitalist class are playing a decisive card in this struggle, while the majority of workers and young people, having tasted a glimpse of their immense potential force, are deciding to push the struggle further. All the ingredients are present for a massive confrontation between the classes. Yet, the leaders at the top of the movement are using all their efforts to avoid such a scenario, scared as they are of losing control over the situation.

An all-out general strike, by bringing the whole economy to a halt, could not only force the government and the bosses to retreat on their immediate agenda. It would also pose, in effect, the question of who has the power in society. The vital lessons of May 1968 must be re-visited by a new generation of activists, to become prepared for such an outcome, and all that it implies.

The development of an all-out general strike needs to be discussed, prepared for and built up consistently in all workplaces, schools and universities, assisted by regular general assemblies, and democratically-elected bodies of action. Coordinated on a local, regional, and national level, those bodies would bring the possibility of raising the struggle to a new level. They would form the basis for a decisive struggle to replace Sarkozy & Co. with a government of workers’ representatives, elected by bodies such as these, and open the way for a socialist change of society. In expropriating the major monopolies and banks, and putting them under the democratic control and management of the working class, the starting lines would be drawn for the elaboration of a planned economy, to function in the interests of the majority.

Shut Anglo down - Kick out the government 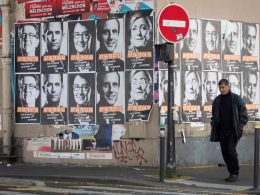 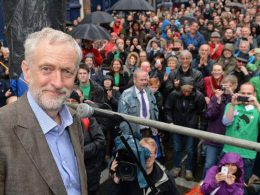 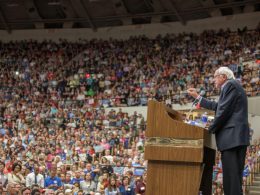