Seven years on, the occupation has been an unheralded disaster for the Iraqi people, with society becoming increasingly fractured along religious, sectarian and national lines to a level far removed from that which existed even under the brutal regime of Saddam Hussein. Tensions continue to simmer amongst the various national groupings with the Kurds in the North demanding increased autonomy with opposition from the Turkmen and Shias in the area. Turkey, just across the border, is concerned that any move towards full autonomy or independence by Iraq’s Kurds could intensify demands for self-determination amongst the sizeable Kurdish minority within its own borders which it is repressing. In the rest of the country, the formerly dominant Sunni minority is becoming increasingly alienated to what it sees as Shia domination and causing a further fanning of the flames of sectarian attacks.

In fact, bombings have become so commonplace that they are rarely reported in the media anymore with estimates of between 10 – 15 attacks aimed at government officials or occupation forces occurring on a daily basis and a slew of car bombs and attacks occurring in the run up to the elections.

Despite having the world’s fourth largest oil reserves, only 18% of Iraqis are happy with their supply of electricity, a reduction from 25% in 2005 according to the US Department of Defence. UNICEF estimates that 40% of children have no access to clean drinking water and access to sanitation is even lower.

At least four million people have been displaced from their homes, left living in squalor in refugee camps in Syria and Jordan or dwelling in the countless slums throughout the country. Over 60% of those that remained are living in houses that require “major rehabilitation” as a result of years of warfare and bombing.

And this is before we consider the vast destruction of human life. The number of documented civilian deaths as a direct result of the war is estimated at around 100,000 but even these figures are disputed as conservative. Some bodies such as the British medical journal, Lancet, have reported a much higher death toll with over 600,000 dead. Either way, wherever the true figure lies between these two estimates, it is nothing short of the wholesale slaughter of innocent Iraqi people.

In Fallujah, site of some of the heaviest resistance to the occupation, the brutal repression of the city has left a new scar. According to the BBC, the number of birth defects reported has seen a sharp rise. According to Dr. Ayman Qais, “Before 2003, I was seeing sporadic numbers of deformities in babies. Now the frequency of deformities has increased dramatically” with the use of Depleted Uranium and white phosphorous by coalition troops as the main suspects. This is despite the fact that Iraq had one of the most advanced healthcare systems in the region.

If this is the result of a “mission accomplished” as the banner behind George Bush stated as he declared an end to hostilities in May 2003, one dreads to consider what exactly an unaccomplished war looks like to the US ruling class.

However, as was said from the outset the war has benefited the multinationals and the vultures of world capitalism, especially the oil companies. While over a trillion dollars of US taxpayers’ money has been squandered, the occupation has opened up massive profitable opportunities for big business, including the oil industry and the private military sector.

With the signing of Order 39, former chief executive of Iraq, Paul Bremer, did what no capitalist country has ever achieved – the complete privatisation of an economy. With a stroke of a pen, Bremer opened up Iraq’s massive oil industry to foreign ownership. Today, 75% of this industry is controlled by the major multinationals with the right to repatriate 100% of profits. Just imagine what the investment of the huge revenues of this industry into schools, new homes, hospitals and jobs in a country where unemployment is as high as 70% in places would mean for Iraq, the birthplace of human civilisation. Instead, it is stolen from beneath the feet of ordinary people and used to line the pockets of Shell, Exxon and co.

Among the real winners of the occupation also, have been the private military contractors, with Blackwater (now called XE) the most infamous of them all. With mounting military casualties (4,379 to date) and a massive overstretching of military resources, the opportunity was ripe for the privatisers of war to offer their services. At its height, over 100,000 of these private warriors were stationed in Iraq, providing security and assistance to combat troops. Exempt from prosecution under Iraqi law, they have walked away unscathed from a slew of incidents involving the blatant murder of civilians. Between 2004 and 2007, Blackwater alone was paid nearly $1 billion for its services. This is the real face of the war on Iraq – a war subsidised by taxpayers and profited on by capitalism and one that the Irish government is complicit in, via the usage of Shannon Airport as a stopover point for the US military.

But despite the devastation, ordinary Iraqis are beginning to find their feet and fight back again. The formerly powerful trade unions of Iraq, butchered under the heel of Saddam, are beginning to flex their muscles again. At the beginning of this year, tremendous struggles of leather and textile workers took place with demands for significant wage increases. This a sign of a new era opening up for the people in Iraq, one where the fight to bring the huge natural resources of Iraq under the democratic control and ownership of the majority will see the vultures of the military and of capitalism consigned to history. 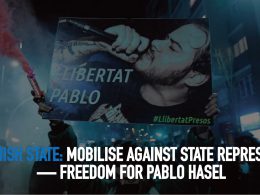 By Rob McDonald — Socialisme Revolucionari (our sister organisation in Catalonia) As the crises of capitalism deepen, so…
bySocialist Party
Read More 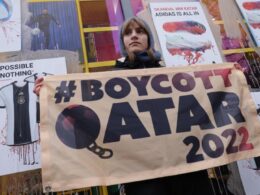 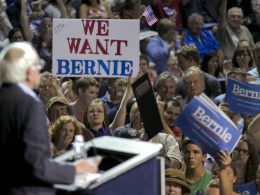