We all know of dictatorial regimes in certain parts of the world, or in history, which rule primarily through repression – the combination of violence and the ever-present threat of violence. This is the most brutal, but most basic way of ensuring the authority of those in power is obeyed, and the inequality in those societies is maintained. As a result, few question the political role of the state, the courts, and the police in these societies.

Of course, this is not the optimal way of ruling for a ruling class, as it requires significant resources and is inherently unstable – existing in constant fear of those millions of working people being repressed. Far preferable is to rule with the consent of the population, which is usually achieved by the control the ruling class has over the dominant ideas in society, which it maintains through its influence on the mass media, education, politics, religion, and culture. Ideology, not violence, is its most powerful weapon.

Yet, for so-called ‘capitalist democracies’ both are essential. A critical part of capitalist ideology is ideas about crime and punishment, law and order, civic duties and transgressions. All of which take as read that the state is a neutral body that represents and serves the interests of society as a whole. The legal system that the state enshrines is supposedly ‘above politics’, and the police and judges who preside over it operate without political bias.

The falsity of this notion becomes apparent as soon as you think about the way society is divided, particularly the class divide between the exploiting minority of owners, and the exploited majority of workers. Clearly, these classes have different, totally conflicting interests, which can’t both be represented and served by the same state.

So which of these classes does the state actually serve? Well, the most fundamental role of the state throughout history, and in capitalist society today, has been to protect the private property of a privileged minority, i.e. its ownership of society’s key wealth and resources. And make no mistake: it is protecting this private property from the rest of society – the majority that produces that wealth but doesn’t get to keep it.

Indeed, for tens of thousands of years early human societies existed without anything resembling a state, because classes didn’t exist, and therefore neither did the need for an institution to protect the privileges of one class from another.

But why doesn’t this majority simply take back its fair share? It’s because of the power of the ideology that convinces them that things are the way they are for a reason, and also that there’s nothing they can do about it. Powerful as this ideological hold is, however, it’s not all-powerful, and at times of extreme crises and struggle, it can break down. It’s times like these that the reality of the state as, in Engels’ words, “special bodies of armed men” in defence of the ruling class becomes especially evident.

The truth is that the state, the courts, and the police are inherently political. We see this every time the police are used to break up a picket of striking workers, to evict tenants from their homes, or to ‘kettle’ peaceful protesters. Far from neutral, they are firmly on the side of the bosses, landlords, and governments. They are not ‘party political’, and merely implement the laws of the land regardless of which party is in power. But that’s the point: the problem and the politics are deeper, embodied in the laws themselves, which are ultimately laws to protect the rich from the poor.

Most people, most of the time, accept or abide by the laws of the state, and to do otherwise is considered ‘civil disobedience’. But as the historian Howard Zinn wrote: “That is not our problem… Our problem is civil obedience.” If we remember that most of the wars, oppression, and environmental destruction in our world is all perfectly legal, we should also remember that the fight for equality, democracy, and justice is also a fight against unjust laws and the states that uphold them.

Vladimir Lenin, the main leader of the Russian revolution, made the following insightful observation in mid-1917: “During the lifetime of great revolutionaries, the oppressing classes constantly hounded them, received their theories with the most savage malice, the most furious hatred, and the most unscrupulous campaigns of lies and slander. After their death, attempts are made to convert them into harmless icons, to canonise them, so to say, and to hallow their names to a certain extent for the ‘consolation’ of the oppressed classes and with the object of duping the latter, while at the same time robbing the revolutionary theory of its substance, blunting its revolutionary edge and vulgarising it”. (State and Revolution) 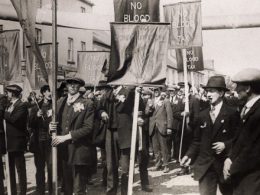 April 2018 marks the one hundredth anniversary of a historic general strike in Ireland. Cillian Gillespie looks at…
bySocialist Party