The killing of 28-year-old Bruna Fonseca on New Year’s Day 2022 was a painful and poignant close to what was an unprecedented year for femicide and gender violence, and sends a stark warning for 2023. Bruna was the first victim of men’s violence against women in 2023. Her murder took place just days before the first anniversary of the killing of Ashling Murphy, the first woman killed in 2022.

From Ashling to Bruna

Between the killings of Ashling and Bruna, there were 11 other women murdered by men in this state, often in their own homes and by men they knew. Over Christmas two pregnant women were murdered: Natalie Mc Nally in Northern Ireland and young Dublin mother, Ailish Walsh, who was killed in London. It’s hard to fathom, but pregnancy is one of the periods in which intimate partner violence and femicide are most common.

A recent study conducted by the Rotunda Hospital found that one in eight pregnant women surveyed was being abused by their partner, and in general, 30% of women who experience domestic violence are physically assaulted for the first time during pregnancy.

A pandemic of violence

A quick snapshot of media coverage of femicide and gender violence over the last year gives an insight into the grim reality: a teenage girl gang raped by five young men; another young victim of gang rape heckled in court by the group of perpetrators and their supporters; a woman in her 70s lured to her violent death by an ex-partner; a woman ill with cancer tortured by a coercive partner (a former Garda) over an extended period; women sexually assaulted by their partners while they slept; stalking; homophobic murders and increase in attacks on the trans community; children abused and killed.

Women’s Aid has said that the statistics confirm that 2022 was “a terrible year for violence against women, both in Ireland and globally”. In Spain, 11 women were killed by their partners or ex-partners in the month of December alone. In this state in the first half of 2022, reported rapes increased by 23%, and at the beginning of December there had been 49,257 domestic abuse reports received by Gardaí — an increase of 9% over the same period in 2021. We also know that this is the tip of the iceberg. One in three women experiences gender-based violence during their lifetime. Less than 40% of women who experience violence will seek help of any sort. Less will report.

Not enough being done

Worsened and exacerbated by the Covid pandemic and its wide-ranging impact on women, the “pandemic of gender violence” is still raging and emergency action is overdue. In the aftermath of the killing of Ashling Murphy and the enormous public outcry that followed, the government published “a zero tolerance policy to tackle domestic, sexual and gender-based violence”. A welcome development but also too little, too late and still much too slow.

Why does it take five years to create 100 new refuge places? Why do we have a housing crisis that has been left to fester for over a decade, in which profiteering has forced women to choose between homelessness or an abusive relationship? Why are we still waiting for the programme of education for schools? Many of these are still gender-segregated and most are religious-run — hardly conducive to challenging sexist, transphobic or homophobic attitudes which are key contributing factors in gender and sexual violence.

The capitalist system has always relied on and profited from its systematic oppression of women; using backward, stereotypical gender roles, laws, the state, as well as promoting the patriarchal family structure, to ensure women provide essential care work, are low paid, are exploited and objectified for profit by the beauty and sex industries.

But in recent times, just like the far right are very consciously trying to stir up racism in order to blame refugees and immigrants for the housing, health and even gender violence crises, misogynistic “influencers” like Andrew Tate and figures like Jordan Peterson are part of a conscious ratcheting up of backward, misogynistic ideas.

We are in the middle of an organised backlash against the global feminist wave and active movements against oppression that began in the 2010s, from Ni Una Menos to #MeToo and BLM, to the struggles for abortion and LGBTQ+ rights and the many gains that were won globally.

That backlash includes millions of boys and young men being targeted online via “the manosphere”: an enormous collection of websites, blogs, and forums promoting toxic masculinity, male entitlement, and opposition to gender equality. These anti-feminist figures, and the social media companies they use to effectively promote themselves (benefiting from algorithms that promote controversy, targeting select demographics), are making huge profits by grooming boys and men to hate women on a massive scale and the impact of that is immeasurable.

Misogyny, gender violence, racism are rampant but they are not natural or inevitable. Capitalism has a vested interest in amplifying all divisions, including by promoting toxic masculinity and rigid gender roles. These ideas gain more traction when people are alienated, anxious and confused, which is also a feature of the chaotic and destructive capitalist world we live in.

Evidence shows that the most important drivers of social change are strong and active social movements — being active in and building campaigns will literally save lives, push back the alt-right misogynists and challenge backward attitudes generally, and is the most effective way of pressuring the government to act now.

Now more than ever we have to actively build working-class and socialist movements of solidarity that proactively take on backward ideas and the system that fosters them. This is the only way of ensuring a society that is genuinely democratic, run in the interests of ordinary people, and that can provide the resources needed to ensure women are safe on the streets, in their homes, and when they are pregnant.

Women, Life, Freedom! Let’s take much needed inspiration from the massive movement that exploded in Iran in late 2022, triggered by the killing of young woman Zhina Masha Amini. 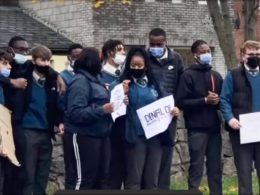