In the last number of weeks job losses and hiring freezes have been announced across the Big Tech sector. Meta, Twitter and Stripe, to name just three, have axed thousands of jobs – an enormous blow to the workers concerned. These companies have been the great success story for capitalism over the last decade and a half, becoming both monopolistic giants and household names.

So why are they shedding jobs now? Are these announcements a proverbial canary in the mine as far as the living standards and jobs of working-class people are concerned? The International Monetary Fund (IMF) in an annual report published in October presented a gloomy picture of the world economy. All the big capitalist countries and blocs are facing further economic slowdown, including China, which played a crucial role in maintaining economic growth over the last number of decades. Coming on top of a major inflation and cost of living crisis this will mean further misery for workers and poor people globally.

The problems confronting Big Tech speak to the wider malaise confronting capitalism internationally, flowing from a number of varied and interconnected factors. The most immediate and pressing issue is the ending of the era of cheap money through low-interest rates that the capitalist class enjoyed since “the Great Recession” in 2008-2009. In general, this was a vital tool for capitalism to generate growth, albeit superficially, in that period.

The world’s central banks, particularly in the advanced capitalist countries, slashed interest rates to near zero, or in some cases below zero. This was connected with a policy of Quantitative Easing (QE) – in which trillions of dollars and euros printed by these banks found their way into the hands of the super-rich to engage in massive speculation in property, stocks and shares.

Cheap money acted as a lubricant for the capitalist class to squeeze out enormous profits, and the value of their assets surged. At the same time, in a stark illustration of the parasitism at the heart of the system, big businesses used this source of cash to buy back shares in their own companies and in turn drive up their stock prices, resulting in bigger payouts in dividends to their super-rich shareholders.

While the value of the assets of the ultra-wealthy mushroomed, living standards for the working-class majority stagnated or declined. Unsurprisingly, precious little QE money found its way into investments to improve public services or infrastructure, or living standards generally, or into measures to tackle the existential threat of climate change.

However, for some working-class people, the low-interest rates of the 2010s acted as respite at a time of austerity and stagnating wages. In Britain, while wages grew on average by 33% a decade from 1970 to 2007, they have stagnated in the last decade. Now many are faced with rising mortgage rates at a time of rising prices generally, putting a major squeeze on living standards.

Capitalist commentators and representatives justify the rise in interest rates as a means to combat rising inflation rates. However, like inflation, these measures are part of a class war offensive by the big bankers and bosses against workers–to boost profits at our expense.

They hope to provoke a short-lived and controlled recession. However, they are far from being in control of this crisis, it is likely to be far more severe than they expect. A recent report by the United Nations found that a 1% rise in interest rates by the Federal Reserve will result in a corresponding fall of 0.8% in economic output for wealthier countries and a 0.5% fall for poorer countries.

Perversely, mass unemployment flowing from such a recession will be a welcome development for them. It will allow them to attempt to drive down wages and conditions by putting fear into workers, thus weakening their bargaining power, which has grown in the post-pandemic period – as illustrated by important strike waves in countries like Britain and the United States.

This is no episodic crisis; it is the latest stage in the long-term decay of the capitalist system. The economic crisis is only one of the manifestations of this decay, along with war, ecological catastrophe and the resurgence of the far-right. We need to get organised now, to defend our livelihoods, our rights and our futures. That means organising for a socialist alternative to the chaos of capitalism.

"It is my firm belief that Africa represents the next global economic frontier, and I am not alone in that assessment." So said Johnnie Carson, assistant secretary of state for African Affairs, to the US House foreign sub-committee on African Affairs on 17 April 2012. Carson is not alone in expressing growing optimism about Africa. As he also noted, the World Bank’s projection of economic growth rates for Africa during the next two years is between 5% and 6%. This exceeds the figures expected for Latin America, Central Asia or Europe. 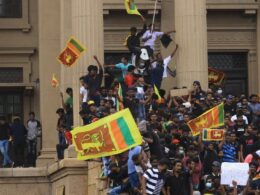 By Serge Jordan, International Socialist Alternative By rising up onto their feet, the masses in Sri Lanka have…
bySocialist Party

By Chris Gray, Socialist Alternative (our sister organisation in the US) Following the historic union victory at the…
bySocialist Party
1 share
1
0
0