The Government spin machine went into overdrive this week and the corporate media ran banner headlines hailing a “Giveaway Budget” and an “€11 Billion Bonanza”.

While it is true that under pressure from below the Government spent more money than it had originally intended, the Budget still falls well short of what’s needed to protect the living standards of ordinary people.

This can be demonstrated in many ways — we will give just two examples here.

Social welfare payments were increased by €12. For someone on a little over €250 this represents less than a 5% increase.

Government spokespersons argued that “top up” increases in fuel allowance, energy credits and double payments go a long way towards bridging the gap to an inflation rate of 9%.

However, this ignores the fact that big new energy price hikes are yet to kick in and that low-income households spend a disproportionate share of incomes on the basics like food and fuel, where prices are rising fastest.

However, the Budget is not only problematic from the point of view that it “does not go far enough”.

The fact that the Government again and again uses “market mechanisms” to drive policy means that wealth ends up being transferred from ordinary people to the rich.

A good example of this is the €500 a year rental tax credit.

Leaving aside the fact that this is barely enough to cover a week’s rent in Dublin, the refusal to introduce a rent freeze means that many landlords will now simply increase the rent with the money then ending up in their bank accounts.

Similarly, the €600 in energy credits will be totally swallowed up by the big energy profiteers. Prices should also have been capped at at least mid-2021 rates. The costs of this could then be covered by nationalising the energy industry and its profits, and by taxing wealth at the top of society.

The Budget also transfers wealth to the wealthy in more direct ways. The €10,000 a month energy grants to business are an example of this.

Socialists do support grants such as this to small and some medium-sized businesses on certain conditions, such as paying a living wage, recognising unions etc. But we are totally opposed to making such payments to hugely profitable corporations, including profiteers that have greatly worsened society’s energy crisis such as the data centres.

Not only will the Budget not properly protect people from the ravages of inflation, it will not prevent criticism of the Government from below or stop protests on the streets.

No country for young people

The Socialist Party calls for the maximum mobilisations possible for the nationwide cost of living protests on 12 November. We appeal in particular to young people to join these protests.

The Government offered young people only sops in this Budget and nothing real to end the housing crisis now driving so many to emigrate. If mass youth emigration is not official Government policy now it might as well be given the impact of their policies.

Similarly, one parent families were left out of the Budget, with the One Family organisation calling it the ‘most regressive Budget for lone parents since 2012’.

Take on the profiteers

We also call for real, hard hitting taxes on wealth and profits to fund the defences needed to protect living standards.

The USC could be abolished twice over if a millionaires’ tax of 2% were introduced — a higher tax could fund even stronger defences.

Collecting corporate taxes at the rate of 15% while eliminating loopholes would raise €30 billion more than the Government collects. But corporate tax rates lower than workers’ tax rates are a scandal, and should therefore be increased to at least 25%.

Profiteering, which today means the few making money by making misery for the many, can be slightly curbed but it can’t be ended while big business owns and controls the economy. Profiteering is part of capitalism’s DNA; it is a system predicated on ruthless competition to maximise profit at the expense of people and the planet.

The Socialist Party will fight to evict this Fianna Fáil / Fine Gael / Green Party Government, but we also need to build a new working-class movement for a left and socialist government that will break with their capitalist system.

Along with the assets of the energy companies, corporate landlords and banks, all the key sections of the economy must be brought into democratic public ownership, and planned to provide for our needs, e.g. building public homes, providing free public transport and childcare, investing to ensure we transition to 100% renewable energy etc.

We urgently need to fight for this socialist alternative. If you agree then join us today. 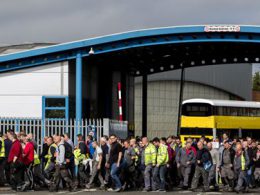 Nationalise Wrightbus to save jobs

The Socialist Party sends solidarity to the 1,200 Wrightbus workers faced with redundancy since the firm went into…
bySocialist Party