HSE junior doctors are expected to vote by a decisive majority to take industrial action. The inhuman and unrealistic hours they are demanded to work lie at the root of it.

According to the Non-Consultant Hospital Doctors committee of the Irish Medical Organisation (IMO), junior doctors are regularly asked to work 70-80 hours per week. Thirty-six hour shifts without a break are not unusual. Nor are the doctors being paid for all the hours they work.

Many find themselves unable to take full annual leave or to avail of their full study time entitlements. The hours many junior doctors are being forced to work are in breach of the European Working Time Directive. The Directive states that 24 hours should be the maximum work shift and 48 hours the maximum working week.

Even the HSE admits that they are in breach of the 48-hour rule in 16% of cases – a figure challenged by junior doctors as a massive underestimate. Four out of five junior doctors recently polled felt they were at risk of burnout as a result of working conditions.

According to the University of New South Wales and the Black Dog Institute junior doctors working more than 55 hours a week are at greater risk of developing mental health problems and experiencing suicidal ideation.

Working conditions are also driving junior doctors out of the country – in a 9 month period from July 2021 to March 2022 more than 400 doctors were granted skilled visas they had applied for in Australia.

There are currently 837 HSE consultant posts unfilled on a permanent basis – and the junior doctors are being used to fill the breach. The State should insist that all vacancies are filled by consultants who agree to work exclusively for the public health system. However, they then need to fix a rate of pay which will manage to both recruit and retain the new consultants.

Meanwhile, junior doctors must be allocated hours which are in compliance with the law, must be paid for every hour worked and then must be allowed sufficient time off both for annual leave and for study.

Negotiations will now get underway between the HSE and the junior doctors. It says a lot about this Government that it takes a strike ballot to bring them to the negotiating table. But if the Government doesn’t take relatively swift action on the hours issue junior doctors will need to be prepared to act on their mandate.

Meanwhile, the strike ballot may be a further indication of an important change in the psychology of health workers more generally. Like the medical scientists who went on strike in May, the junior doctors parked a long-standing grievance for the duration of the Covid crisis.

Now that Covid pressures have been lifted somewhat, the bottled-up grievances are beginning not only to be voiced but acted upon. Many other health service workers – not least among them nurses – will no doubt be watching the junior doctors’ campaign with great interest. The medical scientists and the junior doctors may be the first to challenge the Government. But they are unlikely to be the last.

Oxfam’s ‘Profiting From Pain’ report: The best times" for billionaires 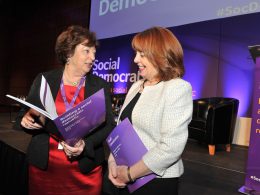 By Cillian Gillespie The last decade has seen convulsive change in Ireland. From 2008 onwards, we witnessed a…
bySocialist Party
Read More