Every time the G7 leaders meet it is to discuss a range of hopeless solutions to an ever-growing mountain of crises that are being thrown up by capitalism. Before the first case of Covid-19 was even reported in 2019, G7 leaders nervously met in France to discuss how they might avert the deep economic recession that was – and still is – inbound.

In 2020 the G7 summit was cancelled due to Covid-19, whereas both the pandemic and climate change were the prime focus of this year’s meeting which took place in Cornwall, and for which Boris Johnson “staged beach parties, hired cruise ships, dug up trees, summoned royals and organised worship of David Attenborough”. This was against a backdrop of a £70 million policing fee and scattered climate protests in neighbouring towns and beaches.

The climate-dominant agenda would have been influenced by a recent analysis by Oxfam which suggested that if the current climate change trajectory remains unchanged, the economies of the G7 nations will shrink by 8.5% each year by 2050 – twice the loss incurred as a result of Covid-19. For the major economies located in countries which are already beginning to feel the impact of extreme weather events, such as those of India and Australia, the damage is projected to be even worse.

Since GDP under capitalism tends to be a measure of the profits of the super-rich – something which is especially true of Irish GDP – the capitalist politicians at the G7 summit should have thrown the rule book out the window in outlining transformative plans to combat climate change, but nothing of the sort happened.

Instead, all the leaders could offer were vague “commitments” and “pledges” to halve emissions by 2030, recommit to mobilise $100 billion (a small fraction of what is actually needed) from “public and private sources” to poorer countries (funds they already should have received by 2020), and to phase out coal energy. But why should we believe them? Even with promises of a “green recovery” and “building back better” post-Covid-19, it was found that the G7 nations committed $42 billion more of Covid response funding to fossil fuel companies than to clean energy.

The beyond-inadequate climate response mirrors that which met the Covid-19 outbreak in that the interests of big business are blocking swift action, and the casualties can be tolerated because they are mainly working-class and poor people in the global south.

Partly, this is because it is not within the G7’s remit. Instead, its core function has always been to safeguard and expand market access for its indigenous capitalists, which is now a high priority given the threat posed to them by Chinese capitalism. It is also because the casualties of climate change will pile high on the side of the working class and poor, not on the side of the big capitalists and their political representatives.

More fundamentally, it is because the type of serious intervention that is required would torpedo the short-term profitability of various capitalist industries. This would create a wave of investor pullback so great that it would almost certainly trigger an economic recession that would overshadow all that have come before. For the capitalists, they are compelled and constrained by their own system to maximise short-term profits, even if it comes at the cost of an enormous working-class death toll, the planet we live on, and eventually, even the capitalists themselves. This is the suicidal logic of capitalism laid bare.

A socialist approach with the working class in control

What is needed is massive public investment in renewable energies and energy-efficient technologies as well as wide scale expansion of public transportation and energy-efficient social housing – this should include a mass programme of retrofitting existing homes and buildings to ensure they are also energy-efficient. Expansion of publicly owned lands to plant extensive public forests would also improve biodiversity, create green jobs and help to recapture carbon from the atmosphere. This should be implemented as part of a just transition to a carbon neutral economy on a socialist basis, with workers from polluting industries being re-trained and guaranteed quality jobs in the new green energy sectors.

Importantly, the wealth exists in society to pay for these projects, multiple times over. For example, the worlds’ biggest corporations have as much as $6 trillion in profits parked in offshore tax havens, whereas there are trillions more in untaxed wealth accumulated by individual billionaires. This wealth should be seized from the polluting parasites, not least because it was literally created by the surplus value generated by the labour of the working class itself. Soberingly, with the stroke of a pen, the 50 biggest world economies committed at least $14.6 trillion in Covid emergency stimulus money, most of which went directly to big corporations to keep them, and the capitalist system, ticking over — imagine if this approach was taken to overcoming climate change!

Their system must be replaced with a democratically planned economy, where its key and dominant sections are publicly owned and run for and by working class people, as they have the most to lose from climate change. On this basis we can direct the resources of society to challenging this looming nightmare faced by humanity and our planet. Nothing less than socialist change will avert climate disaster. 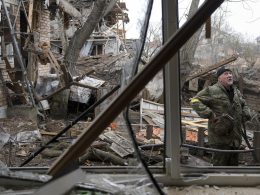 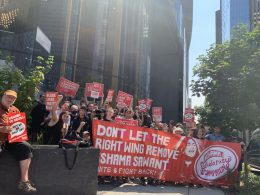