Young Indian climate activist Disha Ravi was arrested by the police at her home in Bangalore on 13 February. She was transferred to a cell in the capital Delhi. The reason for the arrest was her alleged involvement in a solidarity appeal by Greta Thunberg and others for the ongoing farmers’ protest in India. The purpose of the arrest is intimidation against activists in an attempt to stop the organisation of solidarity with the farmers. A broad well-supported active movement of farmers, workers and youth across the country is something the Modi government is particularly afraid of.

Greta Thunberg and singer Rihanna expressed their solidarity with the large protest movement in India. This led to brutal reactions from reactionary Hindu nationalists in India who defend the Modi government’s anti-social attack on farmers. International solidarity was dismissed as ‘anti-Indian’ and it was poured over with sexism. As if solidarity with the people who provide India with food would be ’anti-Indian’. In a toolkit for solidarity with the protest, Greta called for actions at Indian embassies, among others. The toolkit contained information about the protest and some links. When the toolkit was used to prosecute activists, it was immediately taken offline.

According to the Indian police, the toolkit contained a link to a nationalist Sikh group advocating greater national rights, the Canadian based Poetic Justice Foundation. From the beginning, the government tried to divide the farmers’ protest on the basis of the national question, exploiting the strength of the movement among the Sikhs in Punjab to present it as a protest for an independent Khalistan (where the Sikhs live). The right-wing Hindu nationalists play on the national question to divide the movement. An expansion of the protest into an active movement across the country, with international solidarity, would further increase the pressure on the BJP. The attacks on the peasants and all those in solidarity with them are therefore intensified.

The best answer to the attempts at division is solidarity and united protest. The labour movement has to take the lead with strikes: a victory for the peasants would strengthen the labour movement, a defeat would increase the attacks on the workers. Already, the Modi government is coming up with unprecedented privatisations that affect railways, airports and banks, among others. A strike by bank workers, one of the strongholds of the trade union movement in India, is planned for mid-March. There is potential to unite all the discontent with the government’s anti-social and divisive policies.

Climate activists recognise the importance of agriculture and the need to remove this vital sector from the grip of big business. In agriculture, the consequences of climate change are very tangible and extremely harmful. Disha Ravi was one of the founders of Fridays for Future in India and explained her climate activism by what she saw with her grandparents who, as farmers, struggled with the effects of the climate crisis. The government has previously cracked down on FFF, which was accused of supporting terrorism. Ravi remarked then: “Only a government that puts profit over people would consider asking for clean air, clean water and a liveable planet, an act of terrorism.”

International solidarity with the protest and with Disha Ravi and others facing persecution is important. Greta Thunberg expressed her solidarity under the hashtag #StandWithDishaRavi, saying: “Freedom of speech and the right to peaceful protest and assembly are non-negotiable human rights.”

International Socialist Alternative demands the immediate release of Disha Ravi and an end to repression and persecution of those who stand up for the Indian farmers who oppose the liberalisation of agriculture. Send protest mails to the Indian Embassy near you.

I/we, [name] or [organisation], are outraged by the arrest of young climate activist Disha Ravi.

It is the right of young activists to stand in solidarity with the protest of farmers, the people who provide India with food and resist big business’s greater grip on their activities. Protest is not a crime. Standing up for the interests of the workers, farmers and the planet is not anti-Indian, it is on the contrary in the interest of the future of the vast majority of people in India and the rest of the world.

— Stop the persecution of activists and the criminalisation of protest!

— Listen to the justified demands of protesting farmers and workers!

The following two articles appear in the newspaper of our sister party in England & Wales, and the analysis and alternative set out in them will undoubtedly be of interest to our readers. They discuss the upcoming public sector strike in Britain and northern Ireland, the capitalist crisis, and the socialist alternative. 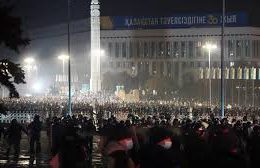