A lesser known aspect of Marx and Engels’ work is their attention to events and processes in Ireland. This is reflected in Marx’s Capital, where he references the shirt factories in Derry and the effect their development had on the broader local economy. However, it was primarily Engels who studied events in Ireland. This was in part through his relationship with Mary and Lizzie Burns, working-class sisters who were part of the 40,000-strong Irish community in Manchester. KEVIN HENRY looks at this aspect of their work.

At times in his early writings, Engels’ descriptions of Manchester’s ‘Little Ireland’ repeat many contemporary stereotypes of Irish people, but his writings also show great empathy with this most downtrodden section of workers in England. Engels didn’t just comment on conditions, but also looked at the effect of immigration. He noted that the existence of a low-paid immigrant workforce was used by the Manchester mill owners to lower wages for English workers, and was absolutely essential for British industry to rapidly expand.

More importantly, his later work shows an attempt to grapple with the reality of life in “England’s oldest colony.” Engels visited Ireland on three occasions. He produced a series of notebooks on Ireland, and he and Marx regularly discussed the country in their correspondences. In fact, he intended to produce a history of Ireland, but unfortunately was unable to see this through due to other pressures.

His first observation on arriving in Ireland was on the overbearing repression, describing how “the ‘iron hand’ is visible in every nook and cranny.” His second was on how devastating the famine and its aftermath had been: “fields are empty even of cattle; the countryside is a complete wilderness unwanted by anybody.”1 In Britain, Marx and Engels challenged the prevailing wisdom of bourgeois society that the famine was a natural disaster, and instead placed the blame firmly at the feet of British imperialism. At a time when respectable opinion contended that the famine and emigration had reduced pauperism in Ireland, Marx bluntly responded, “We must confess that ‘the famine’ is quite as radical a remedy against Pauperism as arsenic against rats.”2

“Act according to a common plan”

Marx and Engels saw the national question in Ireland as inherently linked with social issues, particularly the unresolved question of land ownership. They were extremely critical of  nationalist leaders in Ireland – particularly Daniell O’Connell, whom they called a “political juggler” – for not linking the land question with the struggle for independence and other democratic demands.

Similarly, they saw a dialectical relationship between the British working-class movement and the masses in Ireland. Engels hoped that “the mass of the Irish people will unite ever more closely with the English Chartists and will act with them according to a common plan.” The Chartists were a revolutionary movement of millions of British workers who fought for a six-point ‘People’s Charter’ which called for annual parliaments, universal suffrage, vote by secret ballot, abolition of the property qualification for members of parliament, payment of MPs, and the establishment of equal electoral districts. Engels viewed it as “the most advanced class struggle the world has seen”. In the decade from 1838 to 1848, the mass movement that swept the country threatened to topple the British establishment.

Some of the Chartist leaders were from Irish backgrounds, and its most left-wing leaders drew broader conclusions about the British empire – with one, Ernest Jones, famously responding to the boast that “the sun never set on the British Empire” with the retort that “the blood never dried.” Engels argued that, “The Irish people must fight strenuously, and in close association with the English working classes and the Chartists” and that “only after these six points are won will the Repeal [of the Union] have any advantage for Ireland.”

Marx, Engels and the Fenians

The defeat of the 1848 revolutionary struggles in Europe – including of the Young Ireland revolt and the Chartists – led to a belief that Ireland could become ‘the lever’ to challenge capitalism and English landlordism, which was playing a reactionary role across Europe. When the Fenians – a new Irish nationalist clandestine movement – emerged in the late 1850s, Marx and Engels sought to engage with them. They were unequivocal in supporting democratic rights, including opposing the repressive measures of the British state. When the killing of a policeman during the escape of two imprisoned Fenian leaders in Manchester resulted in brutal reprisals, including the execution of three Fenians, Marx and Engels were involved in the solidarity campaign against repression that involved labour movement activists across Britain. Marx initiated a public meeting on the issue in London, hosted by the International Workingmen’s Association, and it is even speculated that Engels hid one of the escaped leaders. Engels compared the ‘Manchester Martyrs’ to John Brown – who had been executed in the US for heroically organising a revolt against slavery – because of the role it played in galvanising support for the Fenians, particularly among the Irish diaspora.

While opposing the repression against the Fenians movement and being generally sympathetic to their plight, Marx and Engels were not uncritical of the movement, particularly of its leaders. In private correspondence, Engels wrote to Marx saying: “The beastliness of the English must not make us forget that the leaders of this sect are mostly asses and partly exploiters and we cannot in any way make ourselves responsible for the stupidities which occur in every conspiracy.”

These comments seem almost prophetic. A few weeks later, a bomb – detonated with the aim of freeing Fenian prisoners in Clerkenwell jail – misfired, killing a dozen residents of a working-class neighbourhood. Marx commented that, “the London masses, who have shown great sympathy for Ireland, will be made wild by it and driven into the arms of the government party. One cannot expect the London proletariat to allow themselves to be blown up in honour of the Fenian emissaries.”

Notably this approach is world’s apart from the approach of those today who claim to be Marxists and yet, during the Troubles, uncritically supported the IRA campaign, which at the times saw civilians in the North and in Britain consciously targeted.

After independence may come federation

Marx and Engels saw that there was a dialectical relationship between the developing working class in Britain and the Irish masses. They encouraged the labour movement to take up the question of repression and oppression. As Benjamin Lucraft – a English radical trade unionist and collaborator with Marx and Engels – put it, “It was our business to show the Irish that it was only a class of the English that wronged them and that the same class of Irish were as bad.”

Marx saw it as democratic to support independence for Ireland, but even then he added that, “after separation there may come federation” with workers in Britain. This reflects the need to build unity of working-class people internationally. Today, the Socialist Party is unique on the left in continuing to work in that spirit, arguing for “socialist Ireland in an equal and voluntary socialist federation of Scotland, England, Wales and Ireland, which in turn would be part of a wider European socialist federation.” Our opponents sometimes ridicule this idea as some form of new domination of Ireland by England. Nothing could be further from the truth. A socialist federation could only be achieved through democratic negotiation and agreement, with no element of compulsion, and done in a manner that is precisely ‘on a free and voluntary basis’.

Marx and Engels’ position on Ireland evolved over time, especially as they more comprehensively understood the reality of colonialism. Despite living prior to the development of the working-class movement in Ireland at the start of the 20th century, their approach was not driven by illusions in nationalism, but fundamentally by what was in the interests of the working class and oppressed masses, and what would act to assist rather than undermine unity and revolutionary movements. This approach remains indispensable today. 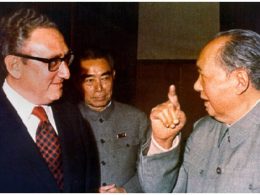 Dahu, chinaworker.info It’s 50 years ago since Henry Kissinger’s secret mission to China which led to a ground-breaking…
bySocialist Party

In this first of a two part series, Cian Prendiville looks at the history of the southern Irish economy from 'independence' to the Celtic Tiger. 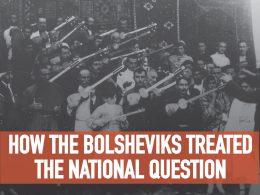 An "Eastern Orchestra" played for delegates during the September 1920 Baku Congress of the Peoples of the East.
bySocialist Party