Plans by governments and central banks to deal with the economic consequences of the Covid-19 pandemic feature in the news virtually every day. While the initial news focus was very strongly on the healthcare system response to the crisis, more recently the focus on the more usual interests of the ruling class has become more pronounced.

The ham-fistedness and callousness of right-wing approaches to the pandemic such as those of Trump in the US and Johnson in Britain should come as no surprise. But their concerns for the wellbeing of the capitalist economy have real merit. The Economist – house journal of the ruling class – reports that falls in sales of over 50% will be common in this recession, and that survival for many companies depends on being able to tap into the $8 trillion of government loans, guarantees and aid currently being made available worldwide.

Who creates the wealth?

As workers globally stop going to work as a result of this pandemic, the world economy in turn has come to a stuttering halt. This is no surprise and it does underline a fundamental point – businesses can’t make money without workers producing value. Day-in day-out, year-in year-out, we are fed a diet of propaganda about billionaires and capitalist “entrepreneurs” being ‘wealth creators’. This can be seen in TV programmes such as RTE’s “Dragons’ Den” and Donald Trump’s (before he became “Commander of Chief of US capitalism) “The Apprentice”.  Well, if they are such remarkable wealth creators, why can’t they just squat down and squeeze out some wealth to tide them over right now?

The fact is that new value in a capitalist economy is produced through human labour of the working class. This is an understanding which is fundamental to Marxism, but not solely to Marxism – Adam Smith, a leading early theoretician of capitalism, acknowledged this before Karl Marx was ever heard of. Nature supplies raw materials and resources, but it is human labour which takes these materials and converts them into something which can be traded.

All of the materials needed to produce a laptop, a train or a couch are part of the planet – only human labour can convert these materials into the objects we use today. Cheerleaders of capitalism insist that Smith was wrong, that Marx was even more wrong, and that profits come from risk-taking, business efficiencies, and foregoing consumption. The current crisis fatally undermines such arguments.

The origins of profit

So it is clear that value is produced through work. But how does profit arise from work? After all, a worker produces value but gets paid, right? This is where Marx’s Labour Theory of Value comes in.

Beginning with the fact that the labour of workers produces new value, Marx proposed that the exchange value of an object is derived from the average amount of “socially necessary labour time” required to manufacture it. Socially necessary relates to the average unit time per worker it takes to produce a commodity, be it a hamburger or a motorbike. Changes in supply and demand might see fluctuations in market prices, but a train will always cost more than a laptop precisely because of the different amounts of work required to produce each.

Following on from this, Marx reasoned that profit must be derived from work as well. His explanation was simple – workers are not paid the full value of their labour. In any given working day, a worker might work for eight hours, producing eight-hours-worth of value; but that worker is not paid eight-hours-worth of value. The employer strives to pay them as little as possible, thus appropriating the surplus. So in effect, you might spend eight hours a day working, but your boss only pays you for (say) five hours, and pockets the remaining three-hours-worth of value as profit.

In short, the profits of business come from the unpaid work hours of their staff. The capitalists are a class that consistently seek to maximise the amount of surplus value or profit they receive at the expense of the working class. This means that they will try and make us work for longer hours, to cut our wages or do both! They will also seek to undermine our “social wage” i.e. public spending on health and education in order to fund a low to zero corporation or wealth tax regime, as what exists here in Ireland.

Why is it important to make these points now? In the normal run of events, the pro-capitalist PR machine churns out overwhelming waves of propaganda which insist that the rich have become rich through their hard work, clear-sightedness, entrepreneurial spirit, risk-taking. We are told that we are fortunate to have such overlords to guide us, fortunate to have the opportunity to work in their wealth-producing ventures, fortunate to be granted the chance to earn a wage. At times like this crisis, when a gale blows the mists clear, we can see the truth. Workers produce value, not bosses. Capitalism is a system whose purpose is to divert workers’ labour into the pockets of the ruling class. Put simply, it is a system based on organised theft.

Furthermore, there is another very good reason to discuss the Labour Theory of Value. We are facing the worst economic crash since 1929, and the narrative is that everything was going fine up until this novel virus arrived. However as recently as October 2019, the IMF warned of slowing growth and serious dangers for the global economy[6]. Without having fully recovered from the Great Recession, a new one was very much on the horizon. This shouldn’t come as a huge surprise – the history of capitalism is made up of booms and slumps. We know that – but why is that the case? Again, the Labour Theory of Value gives us an important as to why this is the case.

Bosses don’t pay workers the full value of their labour. They make their profits from selling products for their full value, and pocketing the surplus. But here we find a crucial contradiction in the system – all bosses are trying to do the same thing, and the vast bulk of people buying these goods are the very workers who made them to begin with. However these workers, collectively, haven’t been paid enough to buy back all of the things they’ve produced. This does not automatically lead to a recession of course, as some workers will produce goods that they will never consume in any case i.e workers who produce steel or armaments, it is other capitalist companies and states that buy these.

Credit will also be used to fund consumption. This credit-fuelled demand leads to increased production, increased investment in new equipment in order to increase productivity and undercut competitors – but eventually the credit bubble has to burst, and money borrowed has to be repaid. When demand drops, overproduction becomes an issue, workers are fired, workplaces close, unemployment shoots up, and there is a recession with all of the human suffering and misery that entails, and which we remember so well from our very recent experiences. This is what happened in 2008-2009, when you had a “credit crunch” in capitalist economies like the US, prior to this cheap credit based on a housing bubble was used to fund a consumer boom in order to buy the goods produced by low-paid workers in China.

The Covid-19 crisis is a catastrophe which is seeing deaths and illnesses, psychological suffering, impoverishment and misery escalate globally. It has been particularly sharply felt because of the conscious decisions of capitalist  governments to under-resource healthcare internationally, and because of the poverty to which so many countries are condemned by the global capitalist system. Like the wars to which it has been compared, this crisis is also a time when the cosy narrative of capitalism being the best, fairest, most rational way of organising our species is challenged by the shock we are experiencing.

The economic crisis which is underway is real and potentially devastating. It is real-world evidence for the correctness of the Labour Theory of Value. This economic downturn will, however, be just one of an ongoing series dating back to the very beginning of capitalism. As long as we allow capitalism to reign, we are guaranteed recessions and the associated suffering of so many.

Capitalism, at the time when Marx studied it, was still capable of playing a role in developing society in terms of its productive capacity – even though it faced recurring cycles of booms and slumps. Today, however, the system doesn’t do this at all – quite the opposite. For example, instead of investing in expanding production or new technology, the big companies are more often choosing to use the profits we create to buy back their own stock – creating fictitious wealth on the stock markets.

For example, in a three year period from 2017 onwards, US companies spent $2 trillion buying shares in their own companies. This would lead to a higher value for their shares and in turn higher dividends for its major shareholders. In the short term this means that the wealthiest capitalists can increase their wealth even without increasing their profits.

James Connolly called socialism, “the great anti-theft movement”, i.e. a movement of working-class people to end capitalist exploitation and take back the wealth stolen over generations. It means taking into public ownership the major industries, services, banks and insurances, as well as the vast resources and properties amassed by the capitalist class at our expense. This would end the exploitative, parasitic and anarchic rule of a system where the 26 richest people on the planet have personal wealth equal to that of the poorest 50% of humanity.

Instead, workers – the majority, with the skills and expertise – would be placed at the heart of management of a democratically planned socialist economy. This would allow for the real development of production and technology, in an environmentally sustainable way, and with  human need, not private profit as the driving force. This is the kind of society which the Socialist Party and International Socialist Alternative are fighting for. Join us today. 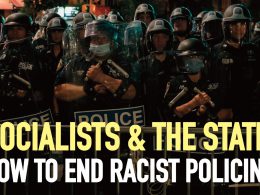 By Tom Crean, Socialist Alternative USA The nature of policing in the United States is inseparable from the…
bySocialist Party 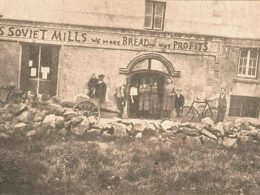