Leo Varadkar said last night that “Viruses pay no attention to borders, race, nationality or gender.” He might have added that viruses don’t check your bank balance, don’t discriminate between billionaires and workers. In spite of this, the Covid-19 crisis does not iron out the class divide in society or the many other forms of oppression such as racism or sexism.

On the contrary, it brings the injustices to the surface more clearly than before. Increasingly, the rule of private profit that capitalism is built on, is proving incapable of meeting the challenge of this horrendous crisis.

On the Greek island of Lesbos, “social distancing” is completely impossible because 20,000 human beings are crowded into a refugee camp built for 3,000. Working-class and poor people living in overcrowded accommodation, and in some cases slums, throughout the world will also struggle in the same situation.

Meanwhile the super-rich are flying off in private jets to wait out the pandemic in remote places, with their own private medical staff. While the vast majority of people on every continent are making sacrifices, big pharma “view Covid-19 as a once-in-a-lifetime business opportunity” (Gerald Posner, quoted in The Intercept) – an opportunity to rip off desperate people with overpriced drugs. This pattern of inequality and injustice is repeated wherever you look.

If anyone is crudely “politicising the crisis,” it’s the government; after the wave of anti-establishment anger in the election, Fine Gael are using Covid-19 to beg for a truce in class conflict. The Taoiseach’s speech on St Patrick’s Day stressed the message of a “great national effort” against the “shared enemy of all humanity.” It’s possible that this rhetoric will find an echo in the short term. It is not hard for Varadkar and co to look good next to the desperate villainy of Trump or Johnson. But this appeal for collective sacrifice is nothing but rank hypocrisy.

For working-class people the experience of Covid-19 is fundamentally worse than for the wealthy. The housing crisis means overcrowding and other unbearable situations like domestic abuse in the narrow confines of the home, for weeks or maybe months. It’s worse again for people with disabilities, people in Direct Provision, residential & foster care and emergency accommodation. The avalanche of layoffs (340,000 and counting) is devastating for workers. Nearly one week since schools shut, there’s still nothing on the horizon for people who are laid off and besieged by utility bills, rent & mortgage payments and childcare costs. €200 or €300 a week won’t cut it.

It’s not a virus that’s inflicting all this suffering. It’s the banks, who won’t get off our backs even though we bailed them out to the tune of €64 billion. It’s our bosses, most of whom will shut their doors at the last possible minute and give the bare minimum, if anything, to laid-off workers. It’s those landlords who are still charging high rents and evicting people. This suffering is not necessary. If we really were “all in this together”, things would look very different. For example, we would waive all mortgage payments, with no piling-up of interest or having to pay in the future . If the banks complained, we would remind them that they are contributing to a “great national effort.” But this won’t happen.

Ireland has 5.5 intensive care beds for every 12 in Italy, and for every 30 in Germany. This fact, with its terrifying implications for how things could go over the next few weeks, is a direct result of decades of austerity in our health service, imposed by the very politicians who are now calling health workers “heroes.” Flattery is cheap. What health workers really need is a plentiful supply of top-quality personal protective equipment (PPE).

To guarantee PPE to every health worker, we need to be ready to seize stocks and nationalise production facilities. Private hospital beds, facilities and equipment must be taken over immediately, without compensation, by the public system. If the privateers cry foul, we can play them the clip of Leo saying that “Everyone in our society must show solidarity.” But he won’t say this.

Committed to the super-rich

Why have such measures not been taken already? Because capitalist politicians hold a deep ideological conviction that, if we impose any discomfort on the rich, disaster will ensue. But this myth is exposed in a very harsh light by Covid-19. In the United States, vaccines developed with public money will be sold back to the public, and the pharmaceutical industry will be allowed to slap whatever price tag they want on it. The same thing has happened over the years with HIV, hepatitis and cancer treatments, leading in some cases to four-figure sums being paid for a single pill. In other words we’re already experiencing a disaster, and the supposed “wealth creators” and “innovators” are profiting from making it worse.

On the other hand, Covid-19 is already forcing right-wing politicians to do what they very recently insisted was impossible. The recruitment embargo for health workers was dumped without ceremony. The Spanish state is nationalising private hospitals. The Italian government wants to break the EU’s fiscal rules. These actions are an admission that a genuine response to the pandemic requires breaking with the bogus logic of “free market” economics.

Who pays the price?

Varadkar warns that “the bill will be enormous” for Covid-19. If we were really “all in this together,” then paying the bill would mean, for example, that the wealthiest 300 people in Ireland would lose most of the €87 billion they own. It would mean taking the Apple Tax of €13 billion to pay for healthcare and to subsidise lost wages. But that’s not what he means.

After the economic crisis of 2007/2008, working-class people suffered to bail out the wealthy, and then, from the vantage point of precarious jobs and emergency accommodation, we watched the very richest amass more wealth than ever before. When the powers-that-be say that we have to pay the bill, they mean going through that experience again, but worse. But if we bow our heads and “pay the bill”, i.e. suffer austerity, we would end up even more vulnerable to pandemics and to disasters such as climate change.

Everyone reading this should of course comply with social distancing, testing, self-isolation and other genuine public health measures and generally working class people have demonstrated the necessary responsibility in the context of this crisis. We’ve seen real social solidarity in our society with support groups being set up in working class communities and 24,000 have applied to work for the HSE to deal with COVID-19.

The case for system change

There is a point where medical questions end and political questions begin. At some stage a vaccine will hopefully eliminate Covid-19, after inflicting a terrible price on ordinary people the world over, but it will not end the inequality and injustice that have made this crisis far worse than it should have been.

Vast wealth, resources and technology exist in society, but instead of being used to cater to human need – in this case, fighting a pandemic – they are in the hands of a tiny number of huge businesses and individuals, disposed of according to the profit motive. Right now in Ireland, health workers’ need for PPE and workers’ need for an income take second place to profit. COVID-19 has posed the need for us to organise and struggle for a single-tier healthcare system, free at the point of use.

If we want to flatten the curve of wealth inequality, it means challenging the rule of private profit and posing a socialist alternative, based on democratic collective ownership of the major resources and industries. In the meantime, we are not “in this together.” 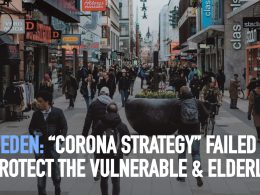 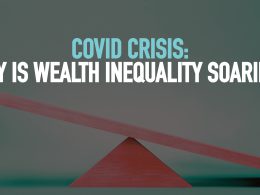 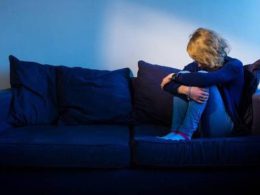 By Aislinn O’Keefe According to a 2018 OECD survey, one in six people across Europe are living with…
bySocialist Party
58 shares
58
0
0