The Teachers Union of Irelands TUI campaign of strike action for Equal Pay for Equal Work will receive huge support from workers and the general public. New entrant teachers earn 14% less in the early years and 10% less over the first ten years at a time when life choice decisions are made.

The leadership of all three teachers’ unions have prevaricated on taking strike action since the two-tier pay system was introduced on 1/1/2011. The strike action by the 19,000 TUI members is well overdue in a feminised sector where new entrants and union activists kept raising the need for direct action by teachers. Unlike prior to the Nurses and Midwives strike last year, no establishment politician is threatening to freeze teachers increments for going on strike. This is a signal to other workers to organise to strike for a living wage.

The Association of Secondary Teachers of Ireland (ASTI) is going to ballot its members to take strike action on ending pay discrimination.  The thousands of Newly Qualified Teachers NQT in the largest teachers union INTO based in primary schools will NOW need to demand that their union ballots members to partake in strike action to end the impasse on pay. The incoming government after the general election will be under pressure to resolve the pay crisis and all the more so if they are confronted by three teachers unions united with a strike mandate.

The Fine Gael Minister for Education Joe McHugh gave an undertaking to the teachers unions at their annual Conferences in 2019 that pay discrimination would be resolved. Since then the Fine Gael Government have buried their heads in the sand on pay discrimination and have continued to fail Irish education and its new entrant teachers.

Minister McHugh last June went on a fact finding mission to Dubai and Abu Dhabi to visit the 2,000 newly qualified Irish teachers who work there. The objective of the visit was no more than a PR exercise, claiming to find out what it would take for teachers to return home to take up teaching jobs as this country faces a serious supply and retention crisis in education. Teacher work abroad mainly to save the 20% deposit required to get a mortgage for buying a home. The prohibitive rents in urban areas make saving money difficult.

Minister McHugh’s cynicism is exposed when it was known the TUI had carried out a survey in a 150 schools of Principals and Deputy Principals in January 2019. In the response to the recruitment and retention difficulties, respondents cited four main reasons: 1) More attractive employment options for graduates elsewhere. 2) Discriminatory pay rates for new entrants.  3) Lack of full hour contracts upon appointment. 4) Cost of accommodation.

The resulting impact on the delivery of education in schools is sharply felt in particular in the lack of maths, Irish, biology and home economic teachers. For schools to fulfill their obligations to students out of field teachers have in many cases had to step in. Other key findings of the survey demonstrate the under the surface crisis that has developed from cutbacks in education:

The solution to the crisis is equal pay now; restoration of all allowances; reverse all cutbacks and for investment in education; the mass building of public housing by the local authorities through direct labour on trade union rates of pay and conditions and rents control where tenants have the right to negotiate their rents downwards. 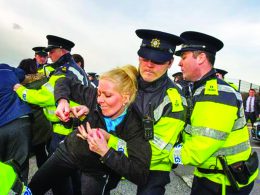 It is now nine weeks since Greyhound workers were treated in the style of William Martin Murphy by their employer, Michael Buckley. They arrived to work – were presented with new contracts, including pay cut of up to 35% and a change to a whole series of other working conditions and were instructed to sign or they were not working. After refusing to sign, they were escorted off the premises by security. Agency workers immediately began doing their jobs. This is 1913 in 2014.
bySocialist Party
Read More

The ESB staff pension fund has a €2 billion deficit. In putting forward new pension proposals management and the group of unions (GOU) argue that there are three main factors for the pension deficit. The stock market crash, wage inflation (i.e. pay rises) and because “We are all living much, much longer.”

Despite more than 289,000 vacant dwellings in Census 2011, there is the most serious housing crisis seen in this country for decades. Few of these vacant properties are being turned over to the state. Many are being deliberately held onto by developers, Nama or receivers, clearly waiting for prices to rise again and turn a profit.
bySocialist Party