Interview with a US socialist on Bernie Sanders campaign

The campaigns for US primaries are at full speed. Bernie Sanders is surging in the polls. We spoke about Bernie’s campaign and the situation in the US with Ginger Jentzen. She is a member of Socialist Alternative, our sister organisation in the US, who played an active role in the fight for a minimum wage of $15.

Hi Ginger, you ran as a Socialist Alternative candidate for city council in Minneapolis in 2017 obtaining 44% of the vote and missed the seat narrowly. Did Bernie’s campaign in 2016 influence your decision to stand?

Definitely. Because despite what it might look like with the reactionary Trump administration in the White House, on the ground in the U.S. there is a growing openness to socialist ideas. Actually the first proof of this was the election of Socialist Alternative member Kshama Sawant to the Seattle council in 2013 with almost 100.000 votes. She was broadly seen as the local Occupy Movement candidate, and elected with a mandate to pass the first $15 minimum wage in a major U.S. city. Her election as an open socialist garnered national and even international media attention. Young people today are the most radical generation since the ‘70s. Many are facing a bleak future of mounting student debt and low-wages. Sawant and Socialist Alternative showed in 2013 that an organized revolutionary party could excite working people to build movements that challenge the inequality of capitalism, and fight for a radical, socialist alternative.

As a member of Socialist Alternative, inspired by Kshama’s first victory, I took lessons from the struggle for $15/hour in Seattle. I became Executive Director of 15 Now and led the grassroots movement to win first in my city of Minneapolis in 2017, and then in our sister city of St. Paul, Minnesota.

It’s undeniable that Bernie’s 2016 campaign calling for “political revolution against the billionaire class” seriously raised the confidence of working people. Our 2017 council campaign in Minneapolis called for working people to get organized. Like Bernie, I didn’t accept a dime in corporate cash and, if elected, would only accept the average wage of a worker in my community. We campaigned for rent control, to tax big developers and the wealthy to build affordable, social housing and fund mass transit. Leaked emails showed that big business saw our grassroots campaign as the biggest threat in the city election to their future profits. We set a city record of raising over $160,000 from hundreds of small donations. In spite of winning the most first preference votes, we were narrowly defeated in the third round of votes distributed.

While we didn’t win the election, we started a citywide debate about rent control and affordable housing, taxing the rich, and the political organizing necessary to challenge the corporate elite — similar to the lessons that progressive movements are taking into Bernie’s more militant, working class centered 2020 election campaign.

Kshama Sawant won her re-election for the second time a couple of months ago. The richest person in the world, Jeff Bezos, the owner of Amazon, invested a lot of money to try and unseat her.

Yes! In November, Socialist Alternative scored a huge victory alongside the working class movement in Seattle by defeating Jeff Bezos, Amazon, and other big businesses that tried to buy the city election. But we built the strongest possible grassroots movement and won. Now we’re carrying forward this momentum with a coalition to Tax Amazon to build the affordable, social housing that Seattle needs.

What this victory in Seattle required was a tight-knit organization, constant in-depth political discussion about the changing terrain of the election and an army of doorknockers to respond to the constant lies and attacks against us.

But above all, this was a political task. Our approach of politics is one of movement-building combined with determined class struggle. We link this to the need for fundamental socialist change. We think the same approach is needed to get Bernie elected, and defeat the Billionaire class.

The media tried to downplay Bernie’s campaign for a long time, but he’s become the frontrunner in many polls now. How did his campaign get so far and how does it compare to 2016?

Bernie’s campaign is more radical and oriented toward the working class than even his 2016 campaign. His formulations of becoming the “organizer-in-chief” as president, and working toward a “government of the working class” have set the right tone. Unlike the other candidates — who pretend not to acknowledge the pressures of Wall Street and big business — Bernie is the first to say that simply winning the election won’t be enough. Working people need to get organized.

Currently, Bernie is the top recipient of donations from among farmers, teachers, unemployed people, retail workers, construction workers, truckers, nurses and bus drivers. Sanders leads in every poll amongst young people, women and young people of color. Bernie’s unapologetic working class platform is inspiring in the best possible way the working class to go and vote.

The key question for millions of people is who can defeat the billionaire-backed bigot in chief, President Trump — and Bernie is the best bet. His “Not Me, Us” slogan is activating people usually disenfranchised by politics. And unlike any of the other Democratic candidates, including Elizabeth Warren, he knows we’re in a fight against the billionaire class.

Alexandra-Occassio Cortez who is a strong ally of Bernie Sanders said in a recent interview that in any other country herself and Joe Biden would not be part of the same party. How long can this contradiction within the Democratic Party last?

Given widespread anger at the establishment, it’s inherent in the situation that we could see new parties to the right and left of the Democrats and Republicans. Since 2016, we have seen the beginnings of a mass women’s movement sparked by #MeToo. There have been mass protests by young people against gun violence and more recently against climate change. And the most significant strike wave in decades beginning with the teachers’ revolt and now spreading to other sectors, including auto workers. There’s a growing interest in socialist ideas, more than ever before with the Democratic Socialists of America (DSA) growing to 60,000 members.

The Democratic establishment knows that AOC and Bernie are a threat to the political project of the Democratic Party, which is to be a reliable partner of big business. They would rather see another four years of Trump before they’d accept a Sanders presidency. In effect, they’d split the party before backing Sanders’ program. If Sanders and his million volunteers manage to overcome all the obstacles in the primary, and there are many, many obstacles, he will need a mass membership organization behind him. In effect he will need a party within the party to push back against the sabotage of the Democratic establishment in the general election.

It is still a very likely scenario that Sanders gets blocked by the Democratic establishment, even if he gains the most votes in the primaries. In such a scenario Sanders supporters will need to call a mass conference to discuss the next steps for our movement. In 2016, the political establishment derailed Sanders’ campaign in favor of pro-corporate Democrat Hillary Clinton, and alienated sections of the working class and young Sanders supporters without a left alternative — but the potential exists for organizing a new party to the left of the Democrats. Socialist Alternative would advocate that this conference should lay the basis for a working-class party, a step which is vital in breaking the power of the billionaire class.

Socialist Alternative decided to endorse Bernie Sanders campaign. What are the main reasons behind this decision?

At this point, Sanders’ campaign is serving to rally the forces which want real change in the interests of working people. As Marxists, we see a number of limitations in Sanders’ politics. Sanders’ program leaves key questions unanswered, not explaining for his supporters that for this kind of politics we need a totally different kind of society, a socialist society, which means once and for all breaking the power of the billionaire class. However, Bernie is clearly speaking directly to the working class with an appeal for the class to get organised, and that is a huge step forward.

Socialist Alternative is going all out for Sanders campaign. We are putting forward resolutions in our unions to endorse Sanders. Socialists advocate for unions that are run democratically and fight for all working people rather than just trying to snuggle up to big business and their politicians. The Sanders campaign is an opportunity to bring together workers who want to fight against capitalism not just for the next few months but beyond.

To go further, to win a Green New Deal for working people, which Bernie unapologetically fights for, means combating the fossil fuel industry profiting off the destruction of our planet. This will require taking the industry into public ownership and organizing a transition toward a fully green energy grid under democratic control by workers — and in the process creating millions of green, union jobs.

To win Medicare for All, we must dismantle the private insurance and big pharmaceutical companies, and build a public, national healthcare system free at the point of use.

We will need to do more to turn this campaign into a formidable movement to win. Sanders is pointing in the right direction, but the Democratic party is firmly controlled by corporate interests and cannot be reformed into a workers party. This is a contradiction that can not hold much longer. We are fighting for a Sanders victory while discussing the need for a new party based on the interests of working people, which would best position Sanders, his supporters, and the political revolution to beat the billionaire class once and for all.

The Auto Industry, Jobs and a Green Future 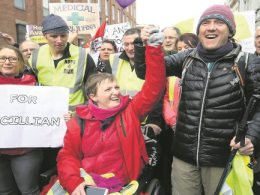 Nine TDs have voiced full support for the Campaign Against Household and Water Taxes and its call for mass non-registration and mass non-payment of the tax.