Former FAI CEO John Delaney recently claimed the FAI would be debt free by 2020. They may not even make it that far. On Monday December 17th the shambolic board turned up at Government buildings requesting an €18 million bailout after Deloitte- the FAI auditors declined to class the FAI as a “going concern” meaning its future viability is in severe doubt.In May this year FAI workers, represented by SIPTU, had raised concerns over the financial position and their future with Minister For Sport Shane Ross.

Minister Ross’ newly found love for Irish football does not extend as far as his love for the Irish banking sector. The idea of using public funding to bail out the FAI would jar sharply with a watching public that has witnessed the excesses of the FAI and John Delaney. That, however, doesn’t mean the public don’t want to see the situation resolved and the future of Irish football secured.

The “caviar culture” as Socialist Party member and Solidarity TD Ruth Coppinger called it, is exemplified by Delaney’s €69,000 50th birthday bill, the €462,000 pay off, his claim for a €2.9 million settlement and the €40,000 six month company credit card bill. It’s a culture that has taken the FAI to the brink. With the organisation estimated to be €62 million in debt there’s a real question over whether €18 million would even cut it. The organisation- if it can be called an organisation- has already been cap in hand to UEFA for a reported €10 million. It is set to lose its sponsorship deal with Three in July 2020, a deal worth €16 million over the last 10 years. Qualification for the 2020 Euros will require a huge effort on the park from the Boys in Green if we are to make the finals which will be partly hosted in Dublin. The financial ramifications of not qualifying could be huge.

The FAI owes the banks €28 million and is under investigation by the Director of Corporate Enforcement after Sport Ireland handed over the KOSI Report (an independent audit of the FAI ) to the authorities. The report recommends that the FAI is not fit to receive public funding but full details of that report remain outside the public realm. Full transparency is needed on any content that relates to the financial situation in the FAI. The legal investigation reportedly centres around a sponsorship deal with Sports Direct worth €6.5 million. A clause in the deal gave Sports Direct a withdrawal option that enabled them to recoup their investment.

The FAI took the €6.5 million up front and used it to reduce bank debts. Sports Direct then triggered the withdrawal clause and are now receiving €100,000 per month off the FAI. It’s just one example of the financial gymnastics the FAI engages in. Deloitte, auditing the FAI since 1997 without many alarm bells, were also the auditors for Ulster Bank as they racked up €18 billion in bad loans in the lead up to the bank bailout. In fact, workers in the FAI, and SIPTU who began to blow the whistle on FAI finances were ignored.

Governance issues still haunt the FAI. Top man Donal Conway is due to step down from the board in January 2020. Representatives of the Schoolboys Football Association of Ireland who handle over 1,000 clubs and about 100,000 players under 16 have either stepped down or declined their nomination to the board. Recent reports revealed their 5-year lease of a corporate box in The Aviva Stadium for €50,000. Presumably that would have been better spent on schoolboy clubs, and is not the kind of thing one arm of an organisation should have to pay to another arm of the same organisation. Any new independent directors or a new CEO have to be responsible to the wider football structures and not just be business appointees to appease Ross and the egotistical media battle between him and the current board..

The FAI owe €29 million on their share of the redeveloped Lansdowne Road. The Aviva as it’s known needs to be taken into  public ownership and not flogged off to bail out the bad debts of the FAI or ultimately the banks.

The question now has shifted to what happens if the FAI goes bust or into administration? In the Dáil Committee on Sport on December 18 it was clear that Ross has no plan and doesn’t feel under any obligation to have a plan. He stated that if The FAI goes, then presumably the league goes too. It was a throw away comment that revealed the actual lack of engagement there has been on the future of football, of the league or the impact on the national side. It’s a modern reflection of the general disregard the state has always held for football on this island.

The historical campaign to ostracise football, based on the ideological development of the state and the promotion of cultural and political nationalism has come in many forms. The GAA banned its members from playing the game, the brutal repression of the game by catholic educators is common talk among a generation. These and the ban on the use of state funded GAA infrastructure for football have all contributed to a game that is severely lacking in facilities and democratic management. All publicly funded facilities should be opened up for use as required by football or other suitable sports. Still the advent of TV and mass communication, and football’s suitability to  the urban and suburban environment and its international appeal saw it become hugely popular.

Separating the national team and the national league, from government funding has been posed as a way forward. Corporate taxation and marketing consultants BDO, who look after the tax affairs of the wealthy have been used to manage the measly €195,000 funding to women’s football. It’s unclear how long this will continue or what future role they may play in the women’s game. Ruth Coppinger TD challenged the idea of engaging a private company in this way. Remarkably BDO are being paid for their services by the FAI. But separation may prove more complicated due to UEFA licensing rules. The FAI hold many of the cards here. Clubs, and the national team will want guarantees regarding their participation in European football. They will need to engage with this directly and not rely on the government to resolve the issues.The state, who have benefited hugely from Irish football and its fans, needs to underwrite the future of Irish football into 2020 and allow the space needed to develop the new football structures..

Whether League of Ireland clubs see their future as linked to this FAI, or any other version of it, is an open question. The FAI, and the state have neglected the league in every way. Investment is minimal to say the least. Prize money is abysmal with this year’s league winners, Dundalk, collecting just €100,000. Despite the odds both Dundalk FC and Shamrock Rovers have broken new ground in European Football. Clubs may well decide that a better future lies in breaking with the national organisation and pursuing investment, tv rights and possibly an all- island league on their own terms.

But the situation facing football is not simply an organisational question. A real discussion is needed to ensure that the mistakes of clubs in the past are not repeated and that the league is built on a sustainable and democratic model rather than chasing short term gains that the market will inevitably take back just as quickly and with drastic repercussions. Ross, under pressure has committed to meeting the League of Ireland clubs. This can be an important stepping- stone if the clubs seize the nettle and look at the long term interests of developing not just their league but also the under- age structures.They should not be excluded from talks with UEFA.

What is needed- Democratise The Game

There is an urgent need for the stakeholders in Irish football to come together and discuss a real way forward that is not dictated by Ross, the rotten FAI Board or the banks. The need is to secure and strengthen the national leagues, ensure security for players and workers, develop youth football , and secure the necessary facilities. There should be full equality between men and women’s football in terms of funding and coverage. The input of football people like Brian Kerr would be positive and could provide the impetus to start that discussion. With fans at the heart of numerous clubs already, the combined experience and understanding of what Irish football needs exists in the game. It needs a forum.

A grassroots democratic movement could pressure the government to back football in Ireland and win the resources and organisation needed to develop the people’s game on a democratic and sustainable basis. Socialists have a role to play in fighting for state investment, community facilities and for a game that is not for sponsors, careerists, gambling and alcohol companies and profiteers but is developed instead for the physical, mental and cultural enrichment of working-class communities. 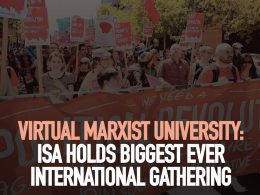