Joker is an engaging film. It won the top award at the Venice Film Festival, but has also faced a wave of scorn from film critics; some of whom describe it as “irresponsible” and “toxic”.

Set in the fictional Gotham City of the early 1980s, commentators from all quarters have argued that the film’s backdrop of wealth inequality and political turmoil will strike a chord with today’s audiences.

The protagonist, Arthur Fleck, is a grown man who lives with his mother. He takes medication to treat his ailing mental health and lives a poor, precarious existence as a clown and budding stand-up comedian. Fleck’s comedy routines fail to make people laugh while at the same time his condition of involuntary, uncontrollable laughter makes him the subject of ridicule amongst his peers. Along with a number of humiliating experiences, he loses access to mental health counselling and medication due to budget cuts.

His situation evokes further pity as we learn that he was subject to severe childhood abuse, while at the same time we’re repulsed as his fantasies about a next-door neighbour, which result in him stalking her on her way to work. His internalised frustration and rage then manifest in murderous violence when he shoots a trio of Wall Street bros who assault him on the subway.

The Wall Street trio turn out to have been employees of billionaire, Thomas Wayne, who’s asked in a TV interview about the murders and whether they were motivated by anti-rich sentiment. Wayne then rails that “Those of us who have made something of our lives will always look at those who haven’t and see nothing but clowns.” This comment sparks a backlash of demonstrations and riots by protesters wearing clown masks and carrying placards with slogans such as “Resist” and “Eat the rich”. A masked protestor is shown on the evening news shouting, “f*ck the rich, f*ck Thomas Wayne, and f*ck the system.”

In previous Batman films, Thomas Wayne was portrayed as a noble philanthropist, yet in Joker, we discover that billionaire Wayne abused a female employee; reflecting the sexist, exploitative behaviour that sparked the #metoo movement.

Much of the hand-wringing by commentators about the film focus on the supposed danger that Arthur Fleck’s violent actions could spark copycat mass shootings. The idea that films are the main cause of mass shootings is consistent with the mainstream media’s superficial response to these increasingly common events. Also, the notion that mental health and violence go hand-in-hand is a dangerous myth that is used by the establishment to try to divorce mass shootings from their socio-economic context.

The stereotype of the mass shooter as a loner with mental health issues deflects from the wider context of the growth of far-right ideas, as well as the social alienation and stress affecting so much of the population due to the precarity of work and housing in capitalist society today. Not to mention the context of the current backlash against the global women’s movement, and the hyper-masculinity that’s celebrated in US culture as part of the establishment’s pro-war propaganda.

What has typified Hollywood films over the past number of decades is that they are generally completely divorced from social reality. Today’s unprecedented inequality; the effects of neoliberal austerity; the rise of right-populism; the increase in mass surveillance and attacks on civil liberties; the numerous wars; and widespread institutional sexism and racism are rarely dealt with in even a limited way by Hollywood. Never mind any treatment of the movements that have arisen against these issues. The barrage of CGI-laden comic book films with their promises of profitable prequels and sequels speaks to the lazy, tired, low cultural level that the corporate domination of art tends to generate.

The picture that Joker paints of modern capitalism is a departure not only from the comic book genre, but from the generally banal storylines and flat characters that an out-of-touch Hollywood has churned out over the past period. However, the graphic violence in Joker is horrific, although it’s thankfully less stylised than the violence that’s celebrated in the films of Scorsese and Tarantino.

The film indicates a growing awareness by sections of the upper middle-class milieu that dominate Hollywood of the impact of capitalist crises on working-class and oppressed people today. Inspired by numerous Scorsese films, Joker also shares the misanthropy of that director and his peers.

The depiction of the protest movement in Joker as a hoard of violent rioters bent on chaos could well indicate the anxiety that this upper middle-class layer feel about social movements that could in any way destabilise or threaten the system upon which their own privilege rests. It’s probably asking too much to expect these people to understand that in the real world all progressive change has been won by struggles from below.

Films don’t need to end with a call for socialism, but it would be no harm if more films could say something about the world we live in. Joker does touch on something, which might make people think, but it’s a deeply pessimistic perspective. The production of films that have an amount of optimism about ordinary people and human nature would be more than welcome. And they’d be closer to the truth. 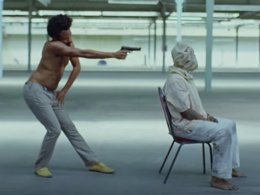