The new HBO docudrama series Chernobyl debuted in May and quickly gathered a global following, becoming the top rated TV series of all time. The gripping storyline takes you from the scene of disaster on 26 April, 1985 when an explosion occurred at the Chernobyl nuclear power plant in Soviet Ukraine, and follows one Soviet nuclear scientist’s quest to uncover and disclose the truth of what happened. The human errors involved in the catastrophe at Chernobyl (both individual and societal) are a stark reminder how dangerous nuclear power can be when disaster strikes. Nonetheless, with only a little over a decade left to transition to a zero carbon economy to avert climate chaos, some prominent climate scientists are now advocating massive investment in nuclear energy. Unmitigated climate change threatens mass species extinction and to destabilize civilization. Clearly we should consider all low-carbon options available to rapidly reduce our carbon emissions.

The problems with nuclear power

Nuclear energy currently provides 11% of the world’s electricity, and unlike solar and wind currently, it can provide 24 hours energy production. In over 50 years of energy production, notwithstanding the events at Chernobyl and Fukushima Daiichi, very few disasters have actually happened. So, why not demand more nuclear energy to tackle climate change? Three key reasons include: carbon emissions, cost / time, and radioactive waste.

All non-fossil fuel energy sources produce some carbon emissions. In the main these come from mining rare earth minerals, production, and transporting. However, nuclear energy emits twice as much carbon as solar panels, and six times as much as onshore wind farms.

Unlike solar and wind technology, nuclear energy costs have gone up, not down. Nuclear energy is the most expensive non-fossil fuel energy source, nearly four times that of wind and solar. That’s largely because the power plants are designed and built to withstand any and all known risks, from human error to natural disasters. That’s a good thing. But, between planning and construction, new plants can take between 10-20 years before any electricity is actually generated. In contrast, large wind farms can be up and running in less than two years. There are new, smaller and cheaper nuclear power plant designs, but none of them have been tested and scaled up to what is needed now.

Lastly, nuclear power generates a considerable amount of radioactive waste, some of which must be kept sequestered from us and our environment for up to 100,000 years. While the most radioactive waste is only a fraction of the total volume generated it nonetheless presents a serious problem to society – like the 120 double-decker busloads of high level waste France produces every year – that we have yet to solve after 50 years of research.

Another overriding concern is that capitalism, a system based on short-term profit, cannot be trusted to expand nuclear power use in a safe and responsible way. If the powerful fossil fuel corporations most responsible for climate change decide to turn to nuclear energy instead, will our planet be in safe hands? Of course not! Time is running out. Every cent invested in nuclear energy takes away from cleaner, cheaper, and significantly less risky renewable sources that can be deployed at a much faster rate. To secure an ecologically sustainable future, we must fight for massive state investment and rapid deployment of publicly owned and democratically controlled solar, wind, and wave energy. 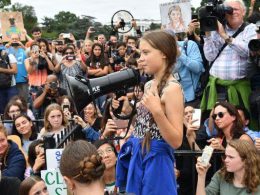