Argentina: The struggle for bodily autonomy

Maria Clara Ferreira from our sister organisation in Brazil reports from Buenos Aires, Argentina where a mass movement with hundreds of thousands on the streets (partly inspired by the repeal victory in Ireland) has developed for bodily autonomy.

The women’s movement in Argentina has a proud history of unity in action to fight to legalizing abortion. It was this struggle which led, eleven years ago, to a bill being drafted for parliament, which has now been debated more than seven times.

The National Women’s Gathering (Encuentro Nacional de Mujeres) event, which has been happening for over 30 years and brings together different facets of the feminist movement, has spearheaded the National Campaign for the Right to Legal, Safe, and Free Abortion since 2005. However, it was only in the current context of instability of the entire system, a crisis of representation, and with the development of a new, more oppression-conscious, generation, that the women’s struggle saw a change – for the better – in its standing and strength.

In the last few years, increasing women’s mobilizations speaking out against the murder of women and all violence to which we are subjected have taken place throughout Latin America. The “Ni una menos” initiative began in 2015, as a spontaneous demonstration held, initially, in three different Latin American countries, exposing the brutal rape and murdering of five young women, and turning indignation into protests out on the streets. Moreover, this served to highlight the international character of this struggle. In Argentina, these actions went on to become a more organic movement, keeping the name“Ni una a menos”, and declaring itself to be anti-capitalist, anti-patriarchal, anti-colonialist, and anti-racist.

Macri was forced to talk about abortion

In the past two years, 8 March has seen an international cry to stop violence against women. In Argentina, it has revolved around the demand for legal abortion, and following the last 8 March day of action, President Macri, under a lot of pressure due to the strength of the movement, allowed the bill to move forward and be discussed in congress.

On 14 June, the Argentinian House of Representatives voted in favour of the bill legalising abortion, with 129 for, 125 against, and 4 abstentions. This came after an over-20-hour-long debate throughout which, on the streets, one million people pressured the 30 or so “undecided” congress members. Schools and universities were occupied and remained so in vigilance until the approval of the bill. As the House of Representatives had approved the bill, the debate moved on to Senate for voting in August.

A delegation of women from Brazil’s Socialism and Freedom Party – PSOL (Partido Socialismo e Liberdade) was there in Buenos Aires on 8 August, to take part in and draw conclusions from this great movement. I was part of this delegation, representing LSR (Liberdade, Socialismo e Revolução – Freedom, Socialism, and Revolution).

The actions during that day started bright and early. All through night and dawn, there were already hundreds of people occupying the streets of Buenos Aires and, around the senate, young people, men and women, were hanging posters and green ribbons. In the morning, there were already thousands of people, organized in groups, collectives and political parties, singing songs, chanting, hoisting flags and green “pañuelos” (hankies).

In spite of the expectation that the senators would reject the bill, the situation was not irreversible, since there were more than ten declared “undecided” senators. The movement, once again, opted to bring people onto the streets in order to put pressure on the senate to vote yes.

There were demonstrations around the world, at Argentinian consulates and embassies in all continents. People mobilized in solidarity in Japan, Paraguay, Ecuador, Bolivia, Brazil, Costa Rica, Australia, Belgium, England, the Spanish State, the US, and many other countries.

The eyes of the world were turned towards Argentina, and society was polarised over the subject. In the square in front of the senate, two major protests were organized. The conservative side, supported by right-wing forces and the Vatican, was also able to bring many onto the street sporting blue “pañuelos”, symbolizing opposition to the legalisation. Even the traditional media, though, had to recognise that the other side, of those with green “pañuelos”, was much bigger.

Walking around the streets of Buenos Aires, one could see young girls of maybe ten years old and older women around their seventies, students from various cities, from schools and universities, from the outskirts of the city and from downtown, all with the same understanding: that fighting to legalise abortion is defending women’s lives. In Argentina, around 500,000 clandestine abortions are performed every year.

The demonstration ranged from the most militant left to moderate progressive organisations. It is also relevant to note the amount of men supporting the cause and taking part in campaign actions, reinforcing the importance of unifying the working class behind these struggles.

The outcome of defeat in the senate vote, with 38 against, 31 for, and 2 abstentions, was widely publicised around the world, along with pictures of young people crying in response. The votes against came from senators in Cambiemos (president Macri’s coalition), from Federal Peronism, and only one vote from the Kirschner-aligned sector.

They don’t represent us!

The result of the vote only strengthened the sentiment that this system has failed and does not represent us. On the week of the first vote, in June, polls showed that 55% of Argentinians were in favour of legalising abortion.

Headlines the next morning featured prominently former president Cristina Kirschner’s favourable position on the topic, but they also highlighted that her administration and her party had previously rejected the bill multiple times. This merely serves to show how fearful Kirchnerist leaders have become of confront this movement.

Papers also exposed the strong investment made by the Vatican to pressure senators into voting against the bill. While the movement chanted on the streets: “Iglesia. Estado. Asunto separado!” (“Church. State. Separate matters!”), the CAEL movement (Coalición Argentina por un Estado Laico – Argentinian coalition for a secular state) organised a stall to collect signatures petitioning for the end of state subsidies to the church, which amount to 20 million pesos a year given by the state to the Catholic Church.

The following morning, people going to work kept their green hankies stuck to their suitcases, around their arms, or around their necks, clearly stating that the struggle will go on until safe free and legal abortion is law. The women’s movement estimates that there were hundreds of thousands of people on the streets screaming for “aborto legal en el hospital” (“legal abortion in the hospitals”), even with the cold and the rain. The government is studying proposals to decriminalise abortion in a future reform of the Argentinian Penal Code, and some senators are ventilating the proposal of a referendum, since there is conflict between the House and the Senate.

The bill cannot be put to the House of Representatives again for one year, but this is not the only action on the table for the national campaign. In October, a new edition of the National Women’s Gathering will take place, and since the campaign for abortion legalisation began a decade ago, it will also produce theses pointing to the next steps for the movement. It promises new actions to take the streets and denounce all politicians who voted no in the upcoming 2019 elections.

The fight goes on

As this article is being written, there are demonstrations happening in Buenos Aires protesting the deaths of more women due to illegal, clandestine abortions. This proves, once more, that the fight against oppression will not leave the streets.

Women are in the front line of the struggles around the world, because we suffer more intensely the inequalities of capitalism. It is up to the revolutionary left to give answers to the anti-system sentiment present in these movements, putting forward the case for the socialist transformation of society. 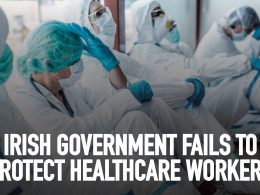 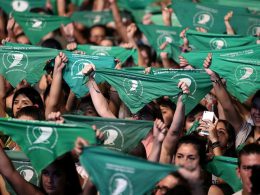 By Keishia Taylor A mass movement of women, workers and young people organised and won Repeal, despite the…
bySocialist Party