With the election of Donald Trump, a racist, misogynistic, ignorant, demagogic billionaire occupies the most powerful office in the world. Here CONOR PAYNE and EDDIE MCCABE look at some of the most pressing issues and questions that arise as a result.

How could Trump have won if he was one of the most hated candidate in US history?

This was a bizarre election, where the second most hated candidate ever managed to lose to the most hated ever. Hence, Trump’s election does not signal majority support for him or his politics. He won with under 26% of the electorate and lost the popular vote – by as many as two million votes.

But 99 million people, 43% of the electorate, particularly the working class and poor, simply didn’t vote at all. This particularly affected the Democratic Party, whose vote collapsed by about nine million votes compared to Obama in 2008. This reflects lower turnout among black people, young people and other key parts of the Democratic base who were not enthused by Clinton’s candidacy.

Trump on the other hand was able to win in many working-class areas in the “Rustbelt” which were won by Obama in 2012. These are towns hit enormously by de-industrialisation and neo-liberal trade deals such as NAFTA. While there is no doubt that racist and sexist attitudes played a part, deeply ingrained as they are in the very structure of US capitalism, the support for Trump among a section of mainly white working-class people reflects a desperation and willingness to vote for anyone who seems to offer change or an opposition to the establishment.

Trump capitalised on this mood with his attacks on trade deals like TPP, his talk of a “rigged system” and appeals to the “forgotten man and woman.” Trump’s victory underlines the crisis and decay of US capitalism and its political parties. The Republican establishment was unable to defeat him in the primaries, and the Democrats in the General Election, these facts speak to the undermining of the authority and support base of both parties as discontent in US society grows.

Why did Hillary Clinton do so badly?

As an alternative to Trump, the Democratic Party offered Clinton: the epitome of the status quo and the establishment, a candidate of Wall Street and war. Her paid speeches to Wall Street banks, her record as a warmonger as Secretary of State and the leaked emails from Wikileaks which showed, among other things, that Clinton admits to having a ‘public’ and ‘private’ position on issues, all contributed to this view of her.

During the Democratic Party primaries, the party machine fought hard to ensure that Clinton was nominated and the campaign of Bernie Sanders was defeated. Sanders won huge support for his calls for single payer health care, free college tuition, a $15 minimum wage and a “political revolution against the billionaire class.”

This campaign had the potential to cut across Trump’s right populism. A poll taken the week of the election showed that Sanders would have defeated Trump 56% to 44%. By rigging the primaries in Clinton’s favour, the Democratic Party bears a huge degree of responsibility for Trump’s victory. Were they not so out of touch with the mood of the struggling mass of the population, they could have made gestures towards the Sanders campaign and adopted some of his polices, but they didn’t. Instead Clinton responded to Trump’s slogan, “make America great again” with the delusional “America is already great.” They presented people with a choice between the status quo or Trump, and got their answer.

A discredited political establishment could not defeat Trump. To defeat his agenda in office, social movements of workers, women, immigrants, LGBTQ people and all others targeted by the Republican right need to be built in the US. There needs to be a break from the Democratic Party straitjacket and the building of a new political alternative – a party for the working class.

What will a Trump presidency mean?

It remains to be seen ­which promises Trump will try to keep and which he’ll try to forget about. He is a populist fundamentally, not somebody with any firm principles or convictions, as his flip-flopping demonstrates. He immediately rowed back on his vow to “jail” Hilary Clinton over the scandal with her emails, for example.

The capitalist establishment who overwhelmingly backed Clinton, their safest bet, will do their utmost to reign Trump in on the policies and rhetoric that go against their interests, like his protectionist policies that threaten corporate trade deals such as TTIP and NAFTA. The Republican right who he has surrounded himself with will see to this.

But there are three things we can be sure of:

1) Trump will be a president of and for the billionaire class. His plans to scrap the meager regulations for banks is a gift to Wall Street, his plans for increased military spending suits the arms industry and his abhorrent anti-climate change stance is music to the ears of the energy companies. His $5.5 trillion tax plan is set to benefit the super-wealthy with 83% going to the richest 20% of the population and 50% going to the top 0.1%.

2) Trump offers nothing to the working class, including those poor white voters in Wisconsin, Iowa, Indiana and Pennsylvania who swung from the Democrats to the Republicans in this election, giving Trump the Electoral College votes he needed to win. Rights and benefits, including programmes like  Medicaid and Medicare, won through struggle over decades are all under serious threat, as are abortion rights and LGBTQ rights.

3) Trump’s presidency will provoke significant social convulsions. His regime is set to proceed with its right-wing and reactionary offensive against workers, women, people of colour and other minorities. Without question there will be a backlash against it, with mass protests, strikes and other forms of resistance. Far-right and racist forces, including racist police officers, will be emboldened by his win and the need to organise against these groups will become all the more urgent. Already we’ve seen glimpses of this and he hasn’t even started yet.

During Trump’s first meeting with Obama, Clinton supporters such as Oprah Winfrey tweeted, “#Hopelives”. New York Times journalist, Nicholas Kristof pleaded with readers to, “Give Trump a chance”. Obama articulated the hopes of much of the establishment that given Trump’s inexperience, he may be more measured and tempered in his new role, “campaigning is different from governing. I think he recognises that.”

This wishful thinking flies in the face of reality.  Trump has not at all reneged on his plans to build a wall across the Mexican border, to attack abortion rights and to deport up to three million undocumented immigrants over the next two years. One look at his transition team demolishes the idea that his administration will act as a check on his wild ambitions.

What is the alt-right?

Most alarmingly Trump has appointed the deranged white supremist, Steve Bannon, as his chief strategist. Bannon once described his Breitbart News website as “the platform of the alt-right”. The alt-right or alternative right movement is a brand of far-right conservatism that generally embraces and promotes white supremicism, anti-Semitism, sexism, homophobia and transphobia. The neo-Nazi website, Daily Stormer, referred to Bannon as “our man in the White House”.

In line with Trump’s deep misogyny, Bannon’s website published an article with the headline, “birth control makes women unattractive and crazy”. Bannon was once charged with crimes related to the abuse of his ex-wife: domestic violence, battery and dissuading a witness.

Trump has also appointed Myron Ebell to transition the Environmental Protection Agency for his administration. Like Trump, Ebell is a long-time climate change denier who helps chair the Cooler Heads Coalition, a group which describes its mission as “dispelling the myths of Global Warming.”

Repealing the 8th & Abortion Rights- We won’t “tone it down" 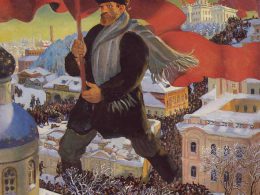 On the centenary of the October Revolution Eddie McCabe looks at the key events and conditions that brought about the world’s first socialist revolution and also explores the decisive leadership given by Lenin, Trotsky and the Bolshevik party.
bySocialist Party
Read More
2 minute read

As the Labour Party prepares to send out ballot papers to the over 610,000 people registered to vote…
bySocialist Party