The 2.6 million-word Chilcot report in essence acknowledges that the devastating war on Iraq and occupation was a completely unjustifiable act of military aggression, by making it clear that it was not necessary. Families of the UK army personnel who died or were seriously injured in Iraq, and the millions of Iraqi people whose lives have been shattered by the war and its consequences, have particular reason to be outraged anew.

While there is nothing fundamentally new in the report, the conclusions are more candid than is usual from establishment circles and they are the strongest official condemnation of the war yet. The report – which incredibly took seven years to compile – contains evidence that goes beyond previous inquiries and revelations in exposing the role played by intelligence bosses, government ministers, military generals and Whitehall advisors.

As expected, Chilcot has refused to make any recommendation on whether there should be prosecutions and in some ways tries to partially exonerate then prime minister Tony Blair, for instance by judging that Blair made no deliberate attempt to mislead people. But despite this muddying of the waters, there is plenty in the report that shows that Blair should – as the Socialist Party has argued – be taken to court for the appalling atrocities he ordered and others he set in chain, and it will fuel more demands for this justice. In the court of public opinion, Blair is rightly branded a war criminal.

This is certainly the view of many of the families of soldiers who were sent to Iraq, among whom have come descriptions of Blair as a “bloody murderer” and the “one terrorist that the world needs to be aware of”. They are considering a private prosecution.

There’s anger that it is ‘beyond the remit’ of the International Criminal Court to place the likes of Blair on trial, but it can place on trial British soldiers who are accused of wrong-doing. This reflects that court ‘looking after its own’, ie, the representatives of the most powerful states globally, that maintain its very structures.

Blair’s huge self-enrichment on the back of his period in public office – he’s now a millionaire many times over, including from advising dictatorships like the Kazakhstan regime – adds to the anger people feel towards his crimes.

Also with blood on their hands are other former ministers closely involved in the decision to launch the invasion, like Gordon Brown and Jack Straw. But complicit were the hundreds of MPs who voted in parliament for the war, including a majority of the Labour MPs and almost the entire block of Tories. Their concurrence – and in many cases goading for war – is now reflected in a degree of closing ranks around Blair, including by David Cameron, who echoed Chilcot’s arguments that Blair didn’t “mislead” anyone and played a “legitimate role in advocating government policy”.

Blair, after all, was representing the interests of those of Britain’s capitalists who were keen to benefit – alongside US imperialism – from ‘regime change’ in Iraq. As the Socialist Party and Committee for a Workers’ International (CWI) have explained in many articles over the years, it was a war for Iraq’s vast oil reserves and to promote western imperialism’s geopolitical interests, military power and prestige.
To proceed with the war, US president Bush and Blair concocted a web of lies, in particular claiming that Saddam Hussein had weapons of mass destruction (WMDs) which he could use within 45 minutes at any time.

Chilcot makes it clear, once again, that WMDs no longer existed in Iraq and there was “no imminent threat fromSaddam Hussein”. He criticises the planning for the aftermath of the invasion as “wholly inadequate” and the poor equipping of the British military forces.

He also delves into the legality of the war, which according to his forensic examination was based on Blair just insisting at the time that his own “unequivocal view” was that Iraq was breaching UN demands to disarm. Chilcot pointedly remarks: “The precise basis on which Mr Blair made that decision is not clear”.

Chilcot elaborates on Blair’s obsequious crawling behind Bush, publishing 31 notes Blair wrote to Bush – including one that began with the words “I will be with you, whatever”, showing that evidence of WMDs wasn’t the central issue for Blair.

The report has focused media attention on issues such as the legality of the war, who was consulted at the top and when, and how ‘evidence’ was produced and interpreted. However, while the lack of democracy in Saddam’s Iraq was a major feature of Blair’s propagandising for going to war, the issue of democracy at home has deliberately not been under the spotlight.

Blair had no mandate to go to war from the British population, a majority of whom opposed the war before the invasion. A phenomenal two million people demonstrated against it in London on 15 February 2003 – the largest ever political demonstration in the country.

Internationally too, never before had there been such a high degree of opposition to a war. Three million people demonstrated in Rome, 1.5 million in Barcelona and millions more in many other protests across the globe. In the United States half a million marched in New York and there were large demonstrations in 150 other towns and cities.

A CWI statement in February 2003 quoted American columnist Thomas Friedman writing: “I have had a chance to travel all across the United States since September, and I can say without hesitation there was not a single audience I spoke to where I felt there was a majority in favour of war… I don’t care what the polls say, this is the real mood”.

But Bush and Blair, having already spearheaded what they at that time viewed as a fast victory in a war to remove the Taliban in Afghanistan, were banking on a similar speed of events in Iraq and a victory that they hoped would undermine the opposition. They were set on pursuing a sick adventure driven by the oil and gas tycoons in the US Republican right, who saw it as completing the work of the their first Gulf war in 1990-91.

They seized on the terrible 9/11 attacks to justify invading Iraq, when in reality 15 of the 19 plane hijackers involved in 9/11 were originally from the western powers’ ally Saudi Arabia, and at that time there was no evidence of any terrorist activity based in Iraq. Yet one of the dreadful consequences of the war on Iraq was the creation of the conditions for the development of firstly Al-Qaida and then Isis, both of which grew out of brutal assaults carried out against Sunni areas and the mass impoverishment of what became a discriminated-against Sunni population.

The CWI foresaw the sectarian conflict that could open up under the impact of imperialist occupation and warned about the dangers in many articles. For instance a CWI statement on 7 February 2003 said:

“In reality, the US could be drawn into an economic, national and ethnic abyss … with civil war looming as a real prospect … The legacy of an attack on Iraq will be a colossal spiralling of threats from Islamic terrorists bent on revenge against the war that appears to them to be ‘against Islam’.”

Instead of one Saddam, the CWI predicted, there could end up being three or more repressive dictators in Iraq as a result of the unleashing of unbridled capitalist struggles for spheres of influence based on ethnic groups, words that are tragically coming true.

Bush and Blair’s actions have created an Iraq with devastated infrastructure, governed by a corrupt, unpopular regime, and with brutal warfare today taking place between government forces and Isis. The population is suffering almost daily suicide bombings and other atrocities, one of the worst being an attack in Baghdad on Sunday 3 July that killed 250 people.

Some commentators have rightly drawn a line from the mass opposition to war in Iraq in 2003 up to the EU referendum Leave result today, because that war was a major contributory reason for the high level of distrust that has built up towards establishment politicians. The pro-capitalist politicians in parliament are no doubt hoping that the Chilcot inquiry will help to counter this distrust and disillusionment by giving them the opportunity to appear to be willing to investigate and acknowledge mistakes, and keen to introduce more ‘rigour’ into decision-making on such serious matters as going to war.

But no matter how far future governments go in being more careful and considered with their evidence and procedures, that won’t stop them from going to war if they deem it to be in the interests of those they represent in big business and the ruling class generally. Since the Iraq war, Britain joined in with the bombing of Libya and Syria and elsewhere in the region.

The only way of stopping Blair and Bush in 2003 would have been to develop the mass opposition movement beyond the level of the magnificent demonstrations, into a movement of organised, workers’ action – including an escalating series of strikes if necessary.

At the same time, the workers’ movement needs to take steps forward in building a political alternative – which today means developing a large party firmly based on the anti-war, anti-austerity ideas of Jeremy Corbyn. Incredibly, after the publication of the Chilcot report, Labour MP Ian Austin heckled Jeremy Corbyn in parliament, shouting “you’re a disgrace” and “shut up”, when Corybn was criticising the Iraq war. Any Labour public representatives who are pro-war regarding Iraq or Syria, or pro-austerity, should face reselection contests.

Responding to the Chilcot report, Blair still defends his decision to go to war, arguing that Iraq would eventually have suffered even worse deterioration and misery had Saddam not been removed. His warped reasoning is that when the Iraqi people would have turned to removing Saddam, that dictator would have dug his heels in like Assad in Syria has, and the death toll and devastation would then have been of Syria’s proportions.

But this is skipping over what happened in the Arab Spring in Egypt and Tunisia, where forceful mass movements removed the incumbent dictators. It is also deliberately ignoring the fact that Syria’s people have, like Iraqis, massively suffered from direct interventions by regional and world powers – partly to cut across revolutionary movements developing from below during the Arab Spring – who have sponsored different fighting forces, flooded in arms and dropped many bombs from the air.

It is the task of the Syrian people, the Iraqi people and those anywhere, to overthrow their dictators or right-wing governments, with support offered by workers’ movements internationally. The Arab Spring showed that mass movements in the Middle East are well capable of performing that task, but its lessons don’t stop there.
The period of those movements, magnificent as they were, also showed that in their aftermath the gains they achieved can be eroded and taken away if enduring, democratic socialist, mass-based workers’ organisations aren’t built that can challenge the power of the capitalist class. This is a crucial task in both the Middle East and globally. 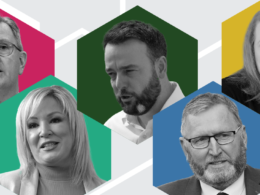 By Kevin Henry  This year’s Assembly election was historic, with Sinn Féin emerging as the largest party, the…
bySocialist Party