Just 62 capitalists own as much wealth as the poorest 50% of the human race.   Between $21 and $32 trillion is in tax havens around the world. The Panama Papers reveal that 140 political leaders were clients of Mossack Fonseca. This is just one law firm that is estimated to control just 5% – 10% of the global market in shell companies. How many more political leaders are named in the papers of all the other firms?

Alongside the inequality is the fact that many of our “leaders”, who have been preaching at us to work harder for less, have their fingerprints all over these tax-dodging and cash-hoarding activities. We know the facts, so now we need to talk about solutions – how we can take control of this wealth and use it for the good of humanity.

“Masters of the universe”

Look at how easily money moves around the world. Compare that to how people trying to move to escape war and poverty are herded and penned, beaten and deported. Look at the massive sums of wealth in tax havens and corporate cash-hoards, and compare it to the suffering and squalor of life under austerity: social housing that doesn’t get built, beds and staff the hospitals don’t have, heavy austerity taxes, and whole societies like Greece pushed to the edge of collapse.

The despicable Donald Trump and his fans condemn people for expecting healthcare, education and social welfare services, which they trivialize by referring to them as “free stuff”. Similarly, in Ireland for keeping hospitals open or reversing cutbacks has been answered by establishment politicians with the question “Where are you going to get the money from?” The Panama Papers and the statistics about global inequality show us that this “béal bocht”/ “poor mouth” on the part of the establishment is totally false, and nobody should fall for the idea that we somehow live in a period of dark-ages scarcity.

Those who defend this situation claim that inequality is the price we have to pay for a system that creates wealth and jobs, develops new technology and rewards “hard work”. But these people are out of touch with what’s really happening in today’s world. We are looking at the prospect of a whole age of stagnation because the rich are by and large not investing their wealth in productive areas. They are hoarding it in corporate cash-piles, keeping it hidden in tax havens, gambling using complex financial instruments, buying elections, or investing in useless or harmful areas.

If somebody buys up something that everybody needs – housing, water, transport – and spends the rest of their lives drawing profits from this, that’s exploitation, not innovation. Even smartphones were developed thanks to state-funded university research. We actually subsidise the capitalist class through corporate welfare; tax breaks and state contracts. The capitalist class are not “wealth creators” but looters and hoarders of wealth. The real “wealth creators” are those who work, by hand or by brain, to provide services and create products.

Every cent in tax havens represents wealth that was extracted from society. We need to seize back this wealth. This means striving for a different way of organising society. The wealth is in the hands of the rich because the means of creating wealth (the factories, land, offices, machines, data etc), are under their control. These must be publicly owned and democratically controlled by working class people.

This would allow us firstly to allocate the surplus wealth in society to tackle poverty and misery, and cut down the work week without loss of pay. Secondly, it would allow us to develop a plan of production to invest in new technology, social progress and sustainable development. Against this socialist vision, all capitalism has to offer is a prospect of stagnation, ecological disaster, violence and instability around the globe, and continuing horrifying levels of inequality 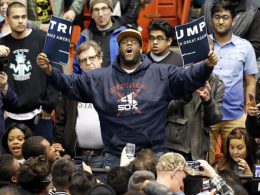 By Eddie McCabe Extraordinary things are happening in the race for the presidency in the US. The once…
bySocialist Party 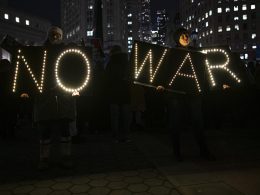