Anti-Austerity Alliance TD, Ruth Coppinger, has today called on the government and Customs to “stop adding to the misery of women in crisis pregnancies by intercepting abortion pills they have ordered and paid for online.” Speaking after figures were released by the Department of Health in response to a Parliamentary Question on the number of ‘abortion pills’ seized by the state, she said:

“The figures show the lengths women are being forced to go to in order to try to access an abortion. Last year 1,017 ‘abortion pills’, mifepristone and misoprostol, were seized by the state — an increase from 438 in 2013. These figures do not include the women who each year travel abroad to have an abortion, or who access abortion pills through friends or relatives in the north using safe websites like www.womenonweb.org, run by doctors.

“In the not-too-distant future, we will look back in shame and embarrassment on this in the same way we now view the ban on contraception, divorce and homosexuality. The 8th Amendment is forcing women who cannot afford to travel to purchase tablets online. The interception of pills is merely forcing the poorest to go later and at greater cost.”

Deputy Coppinger said a Bill by herself and Joe Higgins TD to Repeal the 8th Amendment had come up in the Bills lottery for debate on May 8th and this would be “Labour’s third chance to end this hypocrisy”.

“In support of Deputy Coppinger’s Bill, ROSA is calling a protest at Labour’s head office on Thursday 30 April at12 noon. Women face 14 years in prison for using these pills under the draconian Protection of Life during Pregnancy Act, but they are likely the most hard-pressed economically and unable to afford to travel abroad. This is putting them in a position where they will look for abortion pills online and may purchase from numerous websites. Some of these websites are not reputable and there is no way for the women to know what tablets they are being sent. We would advise anyone looking to access these pills to use Women on Web.

“Abortion is one of the safest medical interventions in the world. Mifepristone and Misoprostol are on the World Health Organisations list of essential medicines because they safe lives particularly in countries where abortion is illegal or inaccessible. We showed the safety of these pills when we took the ‘Abortion Pill Train’ last year. It’s time for the government to stop interfering with our right to choose what happens to our bodies and our right to make decisions about our health care.” 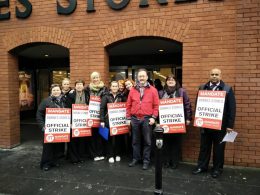 Recent revelations about Manchester Utd’s huge debts have placed a question mark over the viability of football in its current form – profit driven by big business. Could one of the biggest football clubs in the world suffer the same fate as Leeds United, bankrupted and abandoned by its former multi-millionaire owners?