‘Heartbreak, tributes, tears’ was the headline in the Liverpool Echo as the next chapter in the Hillsborough tragedy unfolded. “Let our kids know that he wasn’t a hooligan” was the plea of the widow of victim Patrick Thompson.

‘Heartbreak, tributes, tears’ was the headline in the Liverpool Echo as the next chapter in the Hillsborough tragedy unfolded. “Let our kids know that he wasn’t a hooligan” was the plea of the widow of victim Patrick Thompson.

The jury listened to pen portraits of some of the victims at the current coroner’s inquest called to consider all the evidence, and to finally root out the truth which has eluded the families of the 96 dead since 15 April 1989.

To this day, in spite of the massive weight of evidence pointing to a cover-up designed to shift the blame for the 96 deaths from the agencies of the state onto the victims themselves, not a single person culpable in the tragedy has been brought to book.

The inquest has been told that police accounts of the Hillsborough disaster were changed by senior officers and lawyers to remove criticism of the police leadership.

Margaret Thatcher’s statement at the time that the police should emerge blameless revealed the intentions of the establishment.

That this stage has been reached is due to the courage and fortitude of the families seeking justice for the 96 who, in spite of being fobbed off, crossing chasms of obstruction, showered with empty promises, refusal by ministers to re-open the case, pursued their quest with unremitting courage and determination.

A key factor highlighted by coroner Lord Justice Goldring was Chief Superintendent Duckenfield’s decision to open the football ground’s gates at Leppings Lane which triggered off the catastrophe.

Duckenfield’s lie that the fans had forced open the gate was repeated by FA chief executive Graham Kelly, and media outlets ran with it before the lie was retracted.

Kelly visited the police control room where he was told by Duckenfield that there had been an inrush of fans after they had forced open Gate C.

He later admits this to be untrue but by 3.40pm, BBC Radio Two broadcast: “Unconfirmed reports are that a door was broken at the end that was holding Liverpool supporters”.

Thatcher’s chief press secretary Bernard Ingham is later quoted as saying: “I know what I learned on the spot; there would have been no Hillsborough if a mob, clearly tanked up, had not tried to force their way into the ground.”

These remarks, along with the Sun editor Kelvin Mackenzie’s vile onslaught, unleashed a Niagara of slander onto the victims and their families. (A 50,000-signature petition protesting the Sun’s coverage was delivered to Downing Street by the late Militant [forerunner of the Socialist Party] supporting MP Terry Fields and others from Liverpool).

The coroner has now posed questions which if investigated forensically should uncover the facts which have been shrouded in murk for 25 years.

For instance what was done to manage the approach of fans to the turnstiles at Leppings Lane? Did a crush outside the entrance develop? If so, could anything, or anything more, have been done to avoid or minimise that risk? If so, by whom?

The answer to that last question is the key to shining the light on and proving who bears the responsibility.

Such an outcome will be a testimony to the courage of those who suffered and the mass movement of ordinary working people in Liverpool who have never wavered in their determination to achieve justice for the 96.

The families are to be applauded for their courage and tenacity in the pursuit of justice. A debt of honour is owed to them for showing that working class people, fired with courage and determination, can render the forces of the state accountable. 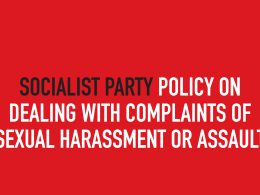