Commenting on the Taoiseach’s tour of the Gulf States, Paul Murphy MEP commented:

“I find the comments from Enda Kenny, who welcomed Saudi Arabia’s election to the United Nation’s human rights council to be an utter disgrace. The regime is using its recent election to whitewash its human rights record.

“Saudi Arabia has one of the world’s worst human rights records. Saudi Arabia is playing a central role in the crushing of democratic movements in the region. Saudi Arabia sent in troops to bloodily repress protests in Bahrain, which saw the jailing of doctors who were graduated in the Royal College of Surgeons of Ireland.

“The sentencing to death of Saudi Arabian opposition blogger Raef Badawi for ‘abandoning his faith’ is due to be debated in the European Parliament next week.

“I would like to ask the Taoiseach if he has raised the case of the repression in Bahrain, the arrest of oppositionists or the other countless abuses of human rights carried out by this despotic semi feudal regime during the visit?

“The Taoiseach is continuing his tour of dictatorships in visiting Qatar today. I have been active in highlighting the gross abuse of workers’ rights in the country. The General Sectary of International Trade Union Confederation (ITUC) correctly summed up the situation well by describing Qatar as a “slave state”.

“Migrant workers building the FIFA World Cup stadiums in Qatar are facing inhuman conditions where one worker a day being killed on the job. If nothing is done to change these conditions an estimated 4,000 workers will be killed before the first game is played in the World Cup.

“On this tour, the Taoiseach is clearly showing that for this government human rights comes a poor second to the profits of big business.”

Paul Murphy, Socialist Party MEP for Dublin will shortly attempt to sail to Gaza as part of the ‘Freedom Flotilla II’ to try to deliver humanitarian aid to people in the Gaza strip. Last year’s ‘Freedom Flotilla I’ was brutally attacked in international waters by the Israeli Defence Forces, with 9 human rights activists killed. Here is an interview with Paul about the Flotilla and the situation in the Middle East.

For latest updates and photos from the Irish Ship to Gaza from Paul, as well as blog posts and analysis, check out the special feature on Paul's website available at www.paulmurphymep.eu/gaza 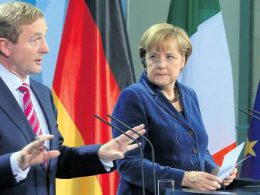 Troika report being cynically used by pro austerity MEPs to give false hope of a retrospective bank deal.
bySocialist Party