My whole life, there a few things I have always believed without any doubt and one of these is the indisputable right for a woman to decide what to do with her own body. It is the first and basic step toward the achievement of a real and complete women’s emancipation.

My whole life, there a few things I have always believed without any doubt and one of these is the indisputable right for a woman to decide what to do with her own body. It is the first and basic step toward the achievement of a real and complete women’s emancipation.

I was surprised when I found out that in Ireland abortion was illegal. At first, I did not want to join any party, but I was willing to get involved in a pro-choice organisation. While postering Dublin, I met Yvette, a socialist who introduced me to ROSA. I must honestly say that at the first I was skeptical and, maybe almost “hostile” to any other ideas. What was halting me was not to think and rethink a feminist perspective in socialist terms, but the idea to join a party was not appealing to me.

Younger and in my country, Italy, politics appeared to me as something far from me, something far from real people. No parties were in the government or even in the parliament to talk on my behalf, to defend my needs. What was more and even worse, the strong sense that everything was fake, artificial as a play- theater where each part is already determined and it does not matter if you like it or not, if you realised or not; you can not decide your own life. This was the feeling that I brought with me to Ireland and then when I met the women in ROSA and the Socialist Party.

I do not remember the moment in which I changed mind. Bit by bit, my perspective changed: from a passive and viewer point of view, to an active one. I realised, what seems logical to me now, that everything is connected and each issue is like a part, a little part, like a finger or an arm in a body and you can not attack or heal that part if your are not able to see the whole body, the whole mechanism, the whole system.

For example, it is not possible to make abortion accessible in Ireland without involving working class women, and migrant women. The ones who much more than others are affected by the economic crisis.

I have just started my path and I do not know where it will bring me. I am hopeful and excited because I do feel I have made the right decision. In some way everything is much more clearer, like when you walk to the edge of a cliff and you look around and you admire the landscape, the ocean.

Now I watch the world from a point that is much more wider and higher than before. It is this sort of understanding that makes me feel aware of what I am and what I can do.

I do not feel an invincible warrior against the capitalist system, but I do feel confident about the possibility that I finally have to control my life and fight for change, not let others do it for me.

Attacks on working people are mounting right across Europe. The so-called PIGS (Portugal, Ireland & Italy, Greece, Spain) countries have been to the forefront of these attacks. In Ireland, we have seen €7 billion of cutbacks, seriously damaging public services, including health and education. In Greece, there has been a 10% cut in wages and spending in the public sector, together with an increased retirement age, VAT increases and the freezing of pensions. Portugal has a plan to cut its deficit by €11bn over four years through a crisis tax on wages and cutbacks in public services. The Spanish Parliament has passed cutbacks worth €15bn on top of €50bn already agreed. Italy is due to implement "emergency-cutbacks" of €24 bn. 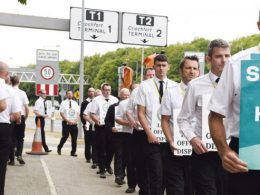 Support the bin workers – No to privatisation!

South Dublin County Council have agreed to lease their domestic refuse collection routes to Greyhound waste for an undisclosed amount of money with the handover due to happen on Monday 4th of April.