Elysium is a dystopian sci-fi action film released in August 2013, starring Matt Damon and Jodie Foster. Set in the year 2154, it follows the story of Max da Costa, a factory worker living in the ruins of a future Los Angeles. In this future, the rich and powerful have fled the poverty, disease, and environmental destruction they’ve wrought on the world, and moved to a space station called Elysium. There they live in an idyllic society, far removed from the struggle of ordinary people on earth.

Elysium is a dystopian sci-fi action film released in August 2013, starring Matt Damon and Jodie Foster. Set in the year 2154, it follows the story of Max da Costa, a factory worker living in the ruins of a future Los Angeles. In this future, the rich and powerful have fled the poverty, disease, and environmental destruction they’ve wrought on the world, and moved to a space station called Elysium. There they live in an idyllic society, far removed from the struggle of ordinary people on earth.

The rich living on Elysium are protected primarily by Jessica Delacourt (Jodie Foster), a high-ranking official who is not afraid to use force to keep the poor separated from the rich. Early in the film she authorizes the mercenary, Kruger, based on Earth, to kill numerous would-be immigrants attempting to reach Elysium. She also seeks to have absolute control of the law enforcement droids that keep the peace on Earth and Elysium.

The main character Max (Matt Damon) is a former criminal, struggling to survive on wages from his job in the factory that builds droids for the fictional Armadyne corporation; these are the same droids that are used as a tool of control and repression against ordinary working people. In a scene that will make any factory worker wince, Max is ordered by his supervisor to enter a confined space without any safety precautions. In doing so, he ends up being exposed to a lethal dose of radiation that will kill him in five days. His only chance for survival is to make it to a Med-Pod, a futuristic device which can fix any human ailment. The problem is that Med-Pods only exist on Elysium, and Max must make a deal with the gangster and radical, Spider, to get there.

Elysium is directed by Neill Blomkamp, whose last (and first major) film was the critically-acclaimed District 9. District 9 dealt quite effectively with questions of immigration, apartheid, social divisions and the military-industrial complex, using quarantined aliens in modern-day South Africa as a backdrop.

Elysium is in a similar vein, using the sci-fi genre to explore social issues. The major difference is that instead of humans exploiting and oppressing aliens, it is the super-rich exploiting and oppressing the overwhelming majority. When asked in an interview whether Elysium reveals how he sees Earth turning out in 140 years, Blomkamp responded “No, no, no. This isn’t science fiction. This is today. This is now.”

This cuts to the heart of what the film represents: the future Los Angeles, a hell-hole of human misery  – shot in the modern-day slums of Mexico City. Anyone who has seen Mexico City, Rio de Janeiro or any other megalopolis in the developing world can testify that this is what reality looks like today for many of the world’s urban poor.

The massive divisions that exist between the rich and the poor, while set in the future, don’t represent a dystopian future. They reflect what already exists under capitalism today. We live in a world where the pay gap between American CEOs and workers has grown by 1000% in the last 63 years (data from Bloomberg, released 2013/04/30); where McDonald’s workers are told to get a second job and work over 70 hours a week to make ends meet on minimum wage; where hundreds of thousands of immigrants are deported each year, tearing families apart; where the rich get the highest-quality healthcare in the world, while the poor get by without health insurance or struggling to maintain low-quality coverage.

In contrast to many similar films which show the “human” side of the oppressors, Elysium makes no attempt to humanize the rich and powerful. They are either seen as blithely ignorant of the inhuman system of inequality and exploitation that they benefit from, or are consciously fighting to protect that system. When a group of gangsters attempt to hijack a rich executive making his way to Elysium, the audience feels no sympathy for him; it’s the same executive that runs the factory that has effectively killed Max.

While this is not a socialist film, there are elements of a socialist programme that come across clearly as necessary for the bulk of humankind: things like universal healthcare, freedom of migration across borders, etc.

What lacks is showing what kind of force, what kind of movement would be necessary to implement the programme which the poor and oppressed are fighting for. Partly, this is because it’s much easier to film Matt Damon fighting for the majority of humankind than it is to show the actual organizing that would be necessary to overthrow capitalism and establish a society that can meet the needs of all. While it might be satisfying to audiences, the ending of the film comes across as rather naïve about how to achieve fundamental change.

The film doesn’t say it explicitly, but the root of the problem is capitalism. A system that puts short-term profits ahead of all other things – from the environment to the living conditions of workers – must be overthrown to achieve equality and real change. Only the international working-class, united in struggle against this system, can make that happen.

The trial of Chelsea Manning

US Civil War - 150 years since the Emancipation Proclamation 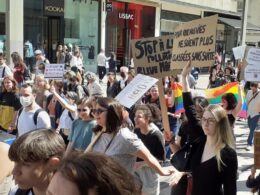 Two excellent public meetings organised by Clare Daly TD and the Socialist Party were held in Swords on the subject of saving Metro North. The working meetings have agreed to launch a cross-community campaign to save this vital project which will bring urgently needed jobs and infrastructure to thousands of people throughout North Dublin.