Only 39 MEPs dared vote for ACTA

ACTA is an international agreement which aims to clamp down on the trade in counterfeited goods. In doing this the treaty would have attacked civil liberties on the internet and also affected access to vital generic medicines and seeds which are crucial in the lives of millions around the world.

This treaty puts the intellectual property rights of major corporations, which in reality means their rights to make a profit, ahead of civil liberties and living standards of millions of the world’s poor.

ACTA was extremely unpopular and faced protests around the globe. MEPs were also bombarded with thousands of emails and phone calls. It is a testament to this movement that only 39 MEPs dared to vote in favour of ACTA.

ACTA as it stands or in a repackaged form is likely to come back to the European Parliament in the coming months and years. Showing the Commission’s arrogance and contempt for democracy, Trade Commissioner Karel de Gucht has already said he intends to push for the Parliament to approve ACTA a second time. The struggle against ACTA and other similar measures therefore must continue.

The Socialist Party’s MEP, Paul Murphy, is a member of the committee in the Parliament that dealt with ACTA and was one of the leading opponents of the Treaty in the European Parliament.

The Socialist Party stands for a socialist economy that puts the interests of the world’s millions ahead of the profits of big business. A society where the incomes of artists, programmers and others are guaranteed and the free sharing of information, knowledge and research for the benefit of the world’s population can take place. 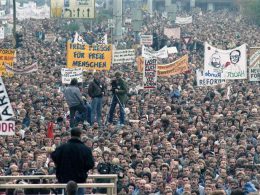 Minister Joan Burton said “we have reached the limits of austerity now”. However this comment brings no hope of relief as unfortunately words have lost all meaning for Labour, who are breaking records for broken promises.

Charles Dickens: the making of a great writer

This year is the bicentenary of Dickens’ birth. Biographies, reissues and TV and film adaptations have poured out showing he still has immense drawing power even 140 years after his death. Dickens was a towering figure who dominated English literature for nearly 40 years, from the early runaway success of The Pickwick Papers in 1836 to the cryptic murder story, The Mystery of Edwin Drood, left incomplete at the author’s death in 1870.