Unsurprisingly, the Bill proposed by Socialist Party / United Left Alliance TD, Clare Daly to legislate for the X Case, was overwhelming defeated in the Dail. The establishment fail yet again; women suffer, and working class and economically deprived women who can’t or find it difficult to muster the money to travel to access a termination, and migrant women and women trapped in abusive relationships who have restrictions on their travel, suffer most acutely.

Unsurprisingly, the Bill proposed by Socialist Party / United Left Alliance TD, Clare Daly to legislate for the X Case, was overwhelming defeated in the Dail. The establishment fail yet again; women suffer, and working class and economically deprived women who can’t or find it difficult to muster the money to travel to access a termination, and migrant women and women trapped in abusive relationships who have restrictions on their travel, suffer most acutely.

The Labour Party deserves particular ire for voting against the Bill, despite reaffirming a pro-choice position at their recent Conference as voted on by delegates. * Labour Party TDs who tried to hind behind the argument that they voted against the Bill as it doesn’t go far enough in terms of abortion rights are hypocrites. The Labour Party has been in government on a number of occasions since the X Case ruling 20 years ago, and have never even attempted to legislate for it, let alone implement full abortion rights for women as the Socialist Party demands. These TDs must think we’re stupid if they expect us to fall for their measly excuses. Similar excuses include the need to wait for the expert group’s report on the issue – women have waited long enough. The expert group that will report towards the end of the year is highly unlikely to advocate anything more than very restrictive access to abortion in this country, be legislated for in any case.

Similarly, Sinn Fein, whose deputies present did vote in favour of the Bill, made it clear through the speech of its Deputy Leader, Mary Lou McDonald, that it does not support a woman’s right to choose, and only wishes to allow abortion rights in very specific circumstances. In other words they are happy to allow women in crisis pregnancy situations to be dictated to by a state that is implementing vicious austerity and wreaking havoc with the lives and futures of all ordinary people and especially women who are disproportionately affected by an assault on the public sector as both workers and users of services.

This means a continued forcing many thousands of women, as happens each year, who feel they must access a termination, to travel abroad. It also must be noted that in the context of the crisis and the prohibitive cost of travelling to access a safe and legal termination, more women are accessing abortion pills online – abortion pills that are totally unregulated – meaning women are taking major risks with their health and in reality their lives in a desperate attempt to access abortion in Ireland.

20 years ago, the X Case graphically exposed the rotten nature of the ultra-conservative Irish capitalist state. The court intervening to prevent a 14 year old, pregnant as a result of rape, travelling to seek a termination provoked an explosion of anger and protest which in reality, pushed the state back, with the Supreme Court establishing the right to seek an abortion when a woman’s life is in danger, including from risk of suicide, through its ruling on ‘X’. Subsequently, there has been two referenda upholding this right, and still there has been no legislation passed to enact this ruling.

Last week’s vote in the Dail reaffirms the fact that the establishment cannot be trusted to be a source of any progress whatsoever – the opposite in fact if we concretely look at the Social Welfare Bill, the college fees agenda, the cuts to special needs and traveller education etc. that are all reactionary attacks on any semblance of a public service and assistance for children, young people, women, vulnerable sections of society and ordinary people in general. The lesson of the X Case ruling is the need for a struggle in society not only for immediate legislation for the X Case, but also for access to free, safe, legal abortion in Ireland for women who decide that this is the option that they need to avail of in a crisis pregnancy situation. A new struggle for abortion rights is vital to ensure we force them to act, and such a struggle should be actively supported by the Trade Union movement. This will only happen if rank and file members of trade unions, women and men, put it on the agenda.

The Campaign Against the Household and Water Taxes, which has achieved a hugely impressive 50% non payment and non registration in its bid to defeat an unjust tax has illustrated the potential to really rattle the government through mass struggle. Similarly, the trade unions, with its ossified leadership, have been forced to make statements and soundings against the tax given the might of this Campaign, illustrating the potential for a new movement in this country, against austerity, but also demanding the rights of women, including abortion rights.

The Socialist Party demands the immediate right for women to access free, safe and legal abortion, provided through a public health service. We support the right for women to choose when and if they have children. For us, this struggle is connected to a struggle against the nightmare of a capitalist system that’s wedded to bailing out the super-rich, at the expense of everyone else. Real choice means that the poverty, low pay, unemployment and austerity attacks and privatisation of public services, are eradicated such that they are not considerations that affect women’s decisions.

Women, and the struggle to gain and to defend their rights, must be a central part of the socialist struggle for the democratic public ownership of wealth, resources, and the banks and key aspects of the economy – ensuring that women have genuine economic security, excellent and free public services and childcare, choice and a chance to live in a society based on human solidarity and equality, not greed and profit.

*All Labour TDs present voted against the Bill, apart from Patrick Nulty TD who previously lost the Party whip

For a European struggle against austerity - For a socialist Europe

Ruth Coppinger speaks at pro-choic rally at the Dail 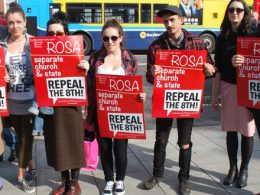 The Socialist Party supported last Saturday’s Pride parade in Dublin, standing in solidarity with the LGBT community in fighting for true equality. Here is the message distributed on the day.

The Draft Bill legislating for X case is designed to placate reactionary elements of Fine Gael and seeks to criminalise and punish women in crisis pregnancies. The pro-choice movement must mobilise to exert maximum pressure on the government to remove the worst provisions in the draft and maintain the fight for a referendum to repeal eighth amendment.