Austerity Treaty is recipe for disaster across Europe

Referendum must be held. People should decline invitation to join ‘Austerity Club’

Referendum must be held. People should decline invitation to join ‘Austerity Club’

What was agreed at last night’s European Council is a recipe for disaster across Europe. Prescribing a diet of austerity and more austerity into the future is a sure way to deepen the crisis of capitalism across Europe.

The Treaty represents a fundamental attack on democratic rights as it attempts to institutionalise austerity policies within country’s constitutions or laws through the ‘balanced budget’ rule. It thereby denies future governments the right to implement policies other than neo-liberal ones, removing the legal right to engage in policies that are necessary – such as massive programmes of public investment to create jobs.

The fact that this Treaty is not an EU Treaty means that the government propaganda about this being necessary for our membership of the euro or linked to our membership of the EU is simply a lie. We have before us an invitation to join an Austerity Club and commit to neo-liberal policies into the future. We should turn down this invitation and reject the austerity that is failing so disastrously across Europe.

I and the Socialist Party are currently taking legal advice and I am actively considering a court challenge in the event that the government attempts to evade its democratic obligation. 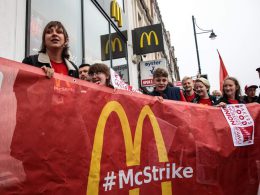 By Shane Finnan Rents soar, the cost of living continues upwards, all the while wages remain, for…
bySocialist Party
Read More