The forum was organised in response to the recent announcement by the government that water charges are to be re-introduced, most likely linked to the installation of water meters in every house in the country, and to discuss the establishment of an anti-water charges campaign.

People travelled to the meeting from all over the country, including from Tipperary, Galway, Cork, Kilkenny, Limerick and from many parts of Dublin. A number of elected public representatives from different parties and organisations were also in attendance.

The forum was addressed by Michael Taft, Chief Research Officer of the trade union, Unite, who outlined the criminal wealth disparity in Irish society where the top 5% of society have 40% of all wealth and the top 1% have 33% of all the financial wealth in this country and yet it is workers who are being hit with cuts in pay and will now be asked to pay water charges. He also showed how current stealth taxes, like bin charges, are a bigger burden on ordinary workers than they are on the wealthy.

Maurice Sweeney, an environmental engineer also addressed the forum and outlined, in great detail, the shambolic state of the water infrastructure around the country, which sees that, on average, 35% of our water is lost through pipe leakages, with over 50% lost in some areas. He argued that there is no evidence to suggest that installing meters will lead to a reduction in consumption, citing the example of England and Scotland, where water usage per household is slightly more than in Ireland, despite the fact that there are meters and charges in these countries already. Meters, he said, were simply a tool to commodify water in order to charge for it.

Swords Socialist Party Councillor Clare Daly outlined the basis on which a new campaign should be built. She stated that it will be a tough battle, that the government has demonstrated in the onslaught against workers in recent months, that it is determined to make ordinary people pay for the economic crisis and that the introduction of water charges is another step in that campaign.

There was agreement that all groups and individuals would come together in one campaign. The main platform of the campaign will be:

A large number of those in attendance volunteered to be part of an initial organising committee to discuss, in more detail, the mechanics of establishing a campaign. The first meeting of this committee will be in the coming weeks.

Activists left this very successful event with a determination to begin to build a strong mass campaign throughout the country.

The health crisis hasn’t gone away 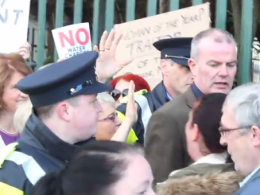 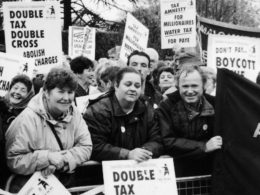 The Labour Party is in an obvious panic over water charges looming large as the Local and European Elections approach. They are right to be. Labour's infamous 'Tesco' Ad during the 2011 General Election Campaign specifically named a Fine Gael water tax of €238 per annum as one of the key things they would stop if in government. Their betrayal on this will cost them dear.
bySocialist Party
Read More