Better to give Obama time to win over Republicans and sceptical Democrats to an effective framework and one that might encourage China to sign up, than try and “rush” through a deal that won’t be accepted in the United States.
This is despite the fact that the issues and dangers of climate change and global warming have been widely accepted and discussed for many decades. How long do they actually need to reach agreement?
The Copenhagen Conference was set-up as part of the UN’s Bali Road Map, which set out a two year deadline to reach a legally binding agreement as a successor to Kyoto, to come into effect when the first round of Kyoto targets expire in 2012. The aim for Copenhagen now though is to come to a “politically binding” agreement which will set out targets to be legally ratified at future talks, potentially in Mexico next year. So what’s the hold up?
The refusal of the United States to ratify the Kyoto Protocol effectively undermined the whole agreement as the US is the largest emitter of greenhouse gases, responsible for 36.1% of emissions in 1990, the base year on which targets are set. By allowing for the agreement to be pushed back, it’s hoped that the Obama administration can reach some sort of deal on emission caps and can sign up to this round of emission targets, enforcing their legitimacy and impact.
But what the Obama regime is campaigning for is not an acceptance of the science of climate change but for a deal that is acceptable to big business. George W. Bush let the cat out of the bag that it was the impact that a deal would have on big business’ profits that really drove the opposition, when he emphasised that the US could not sign up to Kyoto when developing nations (and economic competitors) like India and China were exempt.
While big business initially dismissed climate change in an attempt to defend short-term interests and profits, they’ve begun to recognise that there are also huge profits to be made in climate change agreements via the carbon trading markets and “clean development mechanisms” (CDMs).
Carbon trading is a clever way of avoiding emission cuts by merely juggling the figures around. Under carbon trading schemes, countries which have reduced emissions below their targets are allowed to sell on their excess credits to other countries that can then use the credits against their own emissions. For many companies, this is a far more profitable method of “reducing” emissions without having to invest in developing clean technology. Any excess costs can then be passed onto consumers. No wonder big business is throwing money at Obama’s clean energy plan which will introduce a US trading scheme.
Through CDMs, big business in the developed world can offset emissions by building “green” projects in the developing world. Not only does this cut across making emission cuts at home, it also gives a massive incentive to multinationals to make massive profits out of pillaging the natural resources of the neo-colonial world by developing dams and other energy schemes using “green” technology, more often than not at the expense of local communities. Many of these schemes operate on the BOOT model – Build, Own, Operate and Transfer – where the resources are sucked out of countries and transferred to the developing world.
Closer to home, the sacking of hundreds of workers at Vestas, the UK’s only wind turbine blade factory, on the Isle of Wight shows that capitalism is more interested in the green shade of the dollar than in green technology.
The reality is that capitalism has so far been unable and unwilling to offer a sustainable solution to the growing environment crisis so why should we have any faith that it can reach a realistic solution at Copenhagen or at the talks in Mexico next year?
There is no solution to the environmental crisis on the basis of the market or on capitalism. For decades, companies like Shell have patented new technologies, not to provide a green solution but to cut across this technology in order to defend their interests in the fossil fuel markets. And despite the claims of these companies to be committed to a green revolution, the facts tell another story. In March 2009, Shell stated that they will no longer invest in solar or wind power because it is not economical. Instead, they will focus on developing bio-fuel, a technology which has caused massive damage to people in the developing world as food crops are replaced with bio-fuel crops.
A system that requires an economic recession and the resulting devastation on the living standards of ordinary people to be able to brag about reductions in emissions is absolutely bankrupt. The only solution to this crisis is a socialist one. By taking the development and control of green technology out of the hands of big business and investing on the basis of planning in the interests of humanity and not profit, we can develop industry to provide for all without destroying our planet in the process. 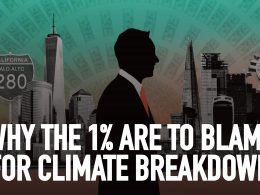 By Sam Belton The word ‘crisis’ has by now become synonymous with the year 2020. It has been…
bySocialist Party

By Laura Fitzgerald  Following the ‘Green wave’ of last May’s Local and European Election, the Green Party have…
bySocialist Party